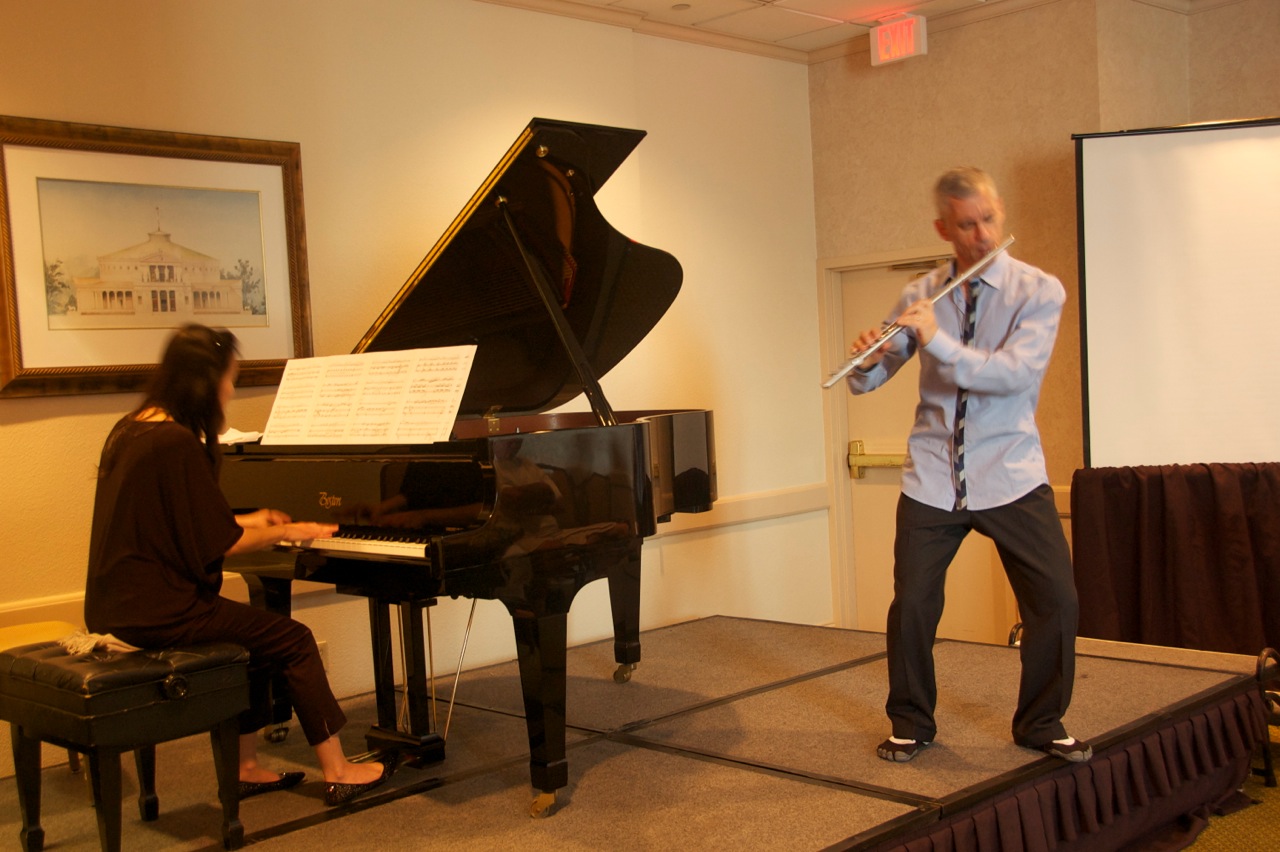 Blog Concert Reviews Featured Reviews September 2013
September 3, 2013October 31, 2013 The Flute View 0 Comments Carol Wincenc, flute convention, Gary Schocker, national flute association, NFA, viviana guzman
The National Flute Association Convention took place in New Orleans August 8-11, 2013 which boasted nearly 3,000 participants this year.  The program Chair was Tadeu Coelho and his assistant, Krisztina Dér.  This wonderful attendance outcome perhaps was due to the increase in number for regional flute choirs who performed.  For example, there were large Flute Choirs from China, Japan, Argentina, Brazil, Puerto Rico, Mexico. There were several on-site created Flute Choir rehearsals and performances with charming New Orleans based names, such as the Jambalaya Flute Choir, Swamp Jazz Flute Orchestra, Gumbo Flute Orchestra and the Orquesta de Flautas de las Americas featuring flutists from Ecuador, Peru, Brazil, Argentina, Colombia, Costa Rica, Europe and USA brought together by Angelita Floyd.
A particular highlight included hearing Gary Schocker present a 10am concert of his own world premiere.... memorized!  What a delight he and pianist Fumi Kuwajima were on Friday morning.  Another delight was hearing Orlando “Maraca” Valle in concert as he presented his latin extravaganza.  Hubert Laws was another welcomed treat at this year’s NFA.  The Lifetime Achievement Award was presented to Barthold Kuijken, Auréle Nicolet and Angeleita Floyd.  The Saturday Gala Concert featured Karl-Heinz Schütz, Sarah Jackson, Nobutaka Shimizu, Janos Balint, Sophie Cherrier, Marianne Gedigian, Marco Granados, Gary Schocker and Carol Wincenc, conducted by Ransom Wilson.
Jane Lenoir led a workshop on the Brazilian choro, and all of the participants got to play along and improvise with the excellent accompanying guitarist and percussionists.  Ms. Lenoir later played the choro arrangements in the Flute and Guitar concert, along with Viviana Guzman, whose Piazzola Histoire du Tango was crisp, lively, and fun.  Rogerio Wolf also played on the concert, with music by Brazilian composer Paulo Porto Alegre.
This year at NFA in New Orleans The Green Golly Project were exhibitors!!!  We had our own Green Golly booth where we introduced three new offerings from The Green Golly Project and got to meet a cross section of flutists attending the convention.  From this new vantage point I got a chance to meet many flutists that I might never have met before from all over the country and I got to learn about their responses to the project.  Many flute teachers tried the Green Golly by Di Zhao flutes and also bought our new book "Green Golly and Her Golden Flute,  as well as the Green Golly sheet music collection (published by Theodore Presser) for their students.  It was gratifying to see that many flutists were interested in the project and enjoyed our products.
Unfortunately since I was glued to my booth I wasn't able to hear many of the wonderful concerts being offered.   But I did get to see a bit of what my colleagues were showing and tried some flutes and head joints.  Right next to me were my friends and colleagues from Bernard Hammig Flutes with some amazing flutes made in Germany.  And right across from me were the beautiful Garner Headjoints, two of which I tried.  I visited the Presser booth, the Powell booth, Di Zhao, Flute Center of NY, Altus Flutes and Sankyo.   And saw many old friends who came by.  It is a strange perspective for someone who performs a lot and is also an entrepreneur, but this NFA I was definitely on the sales side of things and I enjoyed sharing my vision with the flute community.