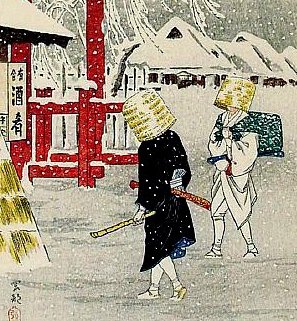 I've always had a very academic and perfectionist approach to long tones, as I learned early from Jeffrey Khaner.

1. Long tones must be played with a metronome.
2. Hold your breath as long as possible so you can get through Faun in one breath and have air to spare!
3. Make sure your sound is beautiful!

This is all great for any professional flutist, but that's not what this post is about.

Sometimes I just want to retreat to the mountains of Japan and play shakuhachi from morning to night.   I have to say that I've learned more about my playing recently just by playing (not practicing...there's a difference) long tones on the shakuhachi.   Maybe it's the raw, woody tone of the bamboo instrument, maybe it's that shakuhachi is never played with vibrato, or maybe it's the simplicity and scale of the music.  Whatever it is, lately I've incorporated a more metaphysical approach to my flute playing.

So, the question is: Can we, as classical flutists, achieve enlightenment through our sound?

In my interview with James Nyoraku Schlefer, Sensei Schlefer explains how shakuhachi playing orignated as a Buddhist practice:

"Traditional shakuhachi practice was created by Buddhist monks, and the earliest written reference was mid 13th century. The monks used shakuhachi as an extension of meditating (breathing meditation, in and out, and listening to sound to achieve enlightenment). Meditation came first, then they decided to use it through the instrument. Some still practice as form of Buddhist practice (no performance and no teaching)."  Shakuhachi music was never meant to be performed.

When I practice shakuhachi, I kneel on the floor, sitting on my heels.   In yoga, it is called the Thunderbolt (or Zen) pose.   Lately I've been practicing classical flute in this pose as well.  While the floor may be uncomfortable, it is recommended to place your knees on pillows or a softer surface to stay in the pose longer.  We sit in this pose for an hour in shakuhachi lessons.

Shakuhachi long tones use only the following notes:  D, F, G, A, C, D.  To start, just play low D alone for as long as it's comfortable.  I always shut my eyes during these long tones..you may also hear some new nuances of your instrument!  Then, gradually going up the scale, slur from D to F, F to G, G to A, etc...you can play for 2 octaves.   Focus only on breathing and nothing else, and just listen to the raw sound.  Like shakuhachi, never use any vibrato.  Empty your mind of all the ways you were taught to play long tones and just go with it!

At this past summer's Flutes by the Sea masterclass, we did a guided meditation every morning.  Carol Wincenc is also a big advocate of meditation, and we often did meditation exercises before our lessons.  Our instructor had us doing the Hong-Sau mantra, breathing in "Hong" and exhaling "Sau."  As most of us know, meditation has a lot of benefits for musicians, especially before performances.  It provides focus, calm, and balance.

So, why don't we use our flutes as tools for meditation?  Do our flutes always have to be these technical instruments preparing for the next performance?  As in the case of the shakuhachi monks, absolutely not!  We already have the tools...our instruments, our many years of tone and breathing practice.  Even if it's for 15 minutes before you start practicing your "real" long tones (yes, I still practice those, too!), you will notice a difference in your playing, your mindset and focus, and even your posture.

Lets try and play flute mindlessly.  Lets try not to perfect everything.  Lets use the flute as a meditation tool instead of a competitive performance instrument.   Maybe in time, enlightenment will be achieved.

2 thoughts on “Long Tones: Can we achieve enlightenment through sound?”