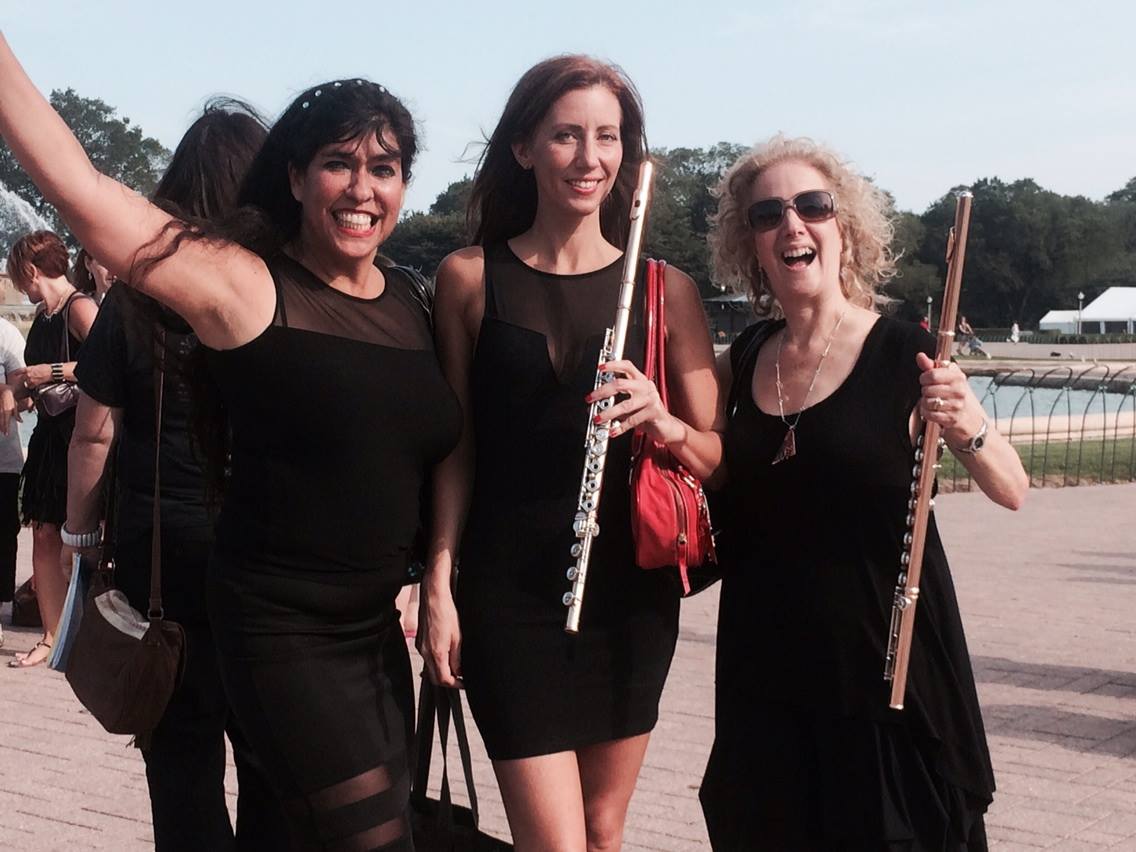 Viviana:  Each experience at NFA is unique and memorable for different reasons. The historic Chicago Hilton was a spectacular location for the convention with it’s elegant chandeliers, sweeping foyers and spectacular Grand Ballrooms.

A convention highlight for me was hearing Gary Schocker’s “Gary Schocker and Friends” varied and charming performance. He started his recital by playing his own Show Tunes, the very moving, Erev Shalom which was followed by another Sarah Jackson stunning performance of Diary of a Songbird. Multi-talented, Gary Schocker not only composed the music for this concert, he not only played his flute, but also accompanied Sarah Jackson on the piano. Kudos to this brilliant artist!

I enjoyed soliciting, organizing and leading Viviana’s Flute Flash Mob. We had so many flutists show up initially to participate, that this group of 100+ flutists walking en masse alerted all sorts of security, police sirens and even a helicopter watch! We ended up playing Ode To Joy at the spectacular Buckingham Fountain.

I also very much enjoyed Lindsey Goodman’s performance of Persistence of Memory by Mark Zanter during her presentation at the Electric + Flute = Electrifying concert.

The Saturday Gala Concert started off appropriately with FLASH! by Daniel Dorff with the dashing and vivacious Sarah Jackson performing on piccolo. Her exemplary playing was complete with flawless craftsmanship that witnessed integrity and style.

The program followed with the svelte Leone Buyse playing an eloquent Bach Suite in B minor and continued with Robert Dick’ s own flute intriguing concerto and Mary Kay Fink performed a captivating Will-O-The-Wisp: A Tone Poem by Gabriela Lena Frank.

The evening came to a riveting end with Julien Beaudiment’s performance of the Mozart Concerto in D major in Symphony Hall in downtown Chicago. His playing was exquisite, musical, and perfectly in-tune - as a former Tipton-ite, this is of utmost importance to me. His cadenzas were refreshing and charming. His rapport with the audience during his introductory comments won the audience over. After his impeccable performance, unanimously, the entire audience leapt to their feet. It was a well deserved standing ovation. Maestro Clyde Mitchell was at the podium and his conducting was concise, musical and easy to follow. The two made for an outstanding conclusion of a wonderful evening.

It is always a treat to see so many colleagues, friends and students… even Sir James and Lady Jeanne Galway were there to crown the event.

Barbara:  Workshops and Panels: Keith Torgan’s  pre-NFA workshop called “Acting for Musician’s was a great way to get ready for the four days of intense activity. Meditation, breathing exercises, and facing of stage/performance fears were among the activities in the three hour session.
I learned a great deal from my colleagues as we shared the panel, “Off the Beaten Path” a discussion of different, successful career paths for flutists.  I shared the panel with illustrious colleagues: Hilary Abigana, Shivhan Dohse, Greg Pattillo, Tereasa Payne, Ali Ryerson and David Weiss.  Shelley Collins was the terrific moderator.  It was an honor to part of the panel and discussion.

The Flute View:
We were very busy this NFA- we hosted a cocktail party to say thank you to our subscribers and meet new flute friends and we presented the Secret Concert!  Each of us performed solo and we played several trio’s together.  I premiered my new piece for flute and electronic’s called “On a Smoke”, my first flute and electronic’s piece.   Viviana and Fluter both performed beautiful, challenging,  theatrical works.  I’m constantly inspired by the incredible playing of my two talented colleagues and friends!

The Flute Flash Mob:
Viviana planned the Flash Mob and we had a great time performing “Ode to Joy” with a large group of flutists (and a drone).  Surprising the public and seeing their reactions was a highlight of the weekend for me.  Thank you Viviana for making this public event happen.

Trying Flutes:
I spent a lot of time trying out many amazing flutes, looking for music, CD’s and generally wandering around the floor learning about new flute products.

And…
Best of all, seeing so many friends and colleagues, and making new friends too.  I hardly ate or slept the entire weekend, but- it was well worth it!  Also don’t wear high heels…

Fluterscooter:  This year's National Flute Association Convention in Chicago was a very special one, as it marked the first official Flute View concert.  We chose to step out of the ballrooms for one night and create a creative and intimate performance in Chicago's Fine Arts building.  We each had the opportunity to create a 10-15 minute piece in addition to playing the winning piece from our Composer's Contest, "Self-Portrait with Orlando" by Joel Hoffman.  My solo piece was titled "My Beautiful, Dark, Twisted, Flute Fantasie," the title being a juxtaposition from famed Chicago rapper Kanye West's album "My Beautiful, Dark, Twisted Fantasy."  I performed my own arrangements and improvisations both solo and over beats from West's album.  However, I chose to perform entirely behind a screen with a strobe light pulsating to each section of the piece.  I ended with Jennifer Higdon's rapid.fire as a performance piece to raise awareness of the recent gun violence in Chicago.  rapid.fire started ended with a bang, actually 21 bangs, and at the end, the screen was lifted.  I won't ruin the surprise for those who weren't there, as I'm sure I will perform the piece again in a similar fashion!

The Flute View also hosted our first Cocktail Party, where we had the chance to meet new and old flute friends.  A highlight performance was Carol Wincenc's, playing Yuko Uebayashi's Misericordia for flute and string quartet.  Sir James and Lady Jeanne Galway were in attendance, and it was great to see them!  And, of course, my favorite part of any flute convention is the chance to catch up with friends, teachers, and colleagues!