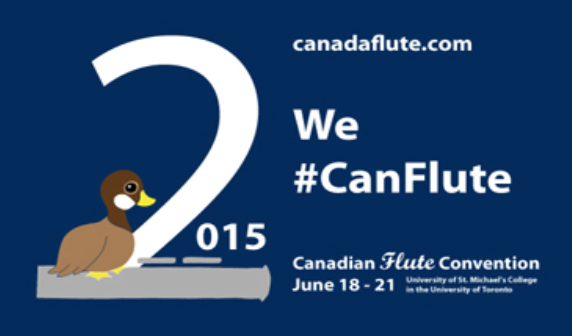 Blog Featured Issues July 2015
July 1, 2015July 1, 2015 The Flute View 0 Comments andra bohnet, canadian flute convention, Gary Schocker, lindsey goodman, michele bellavance, naill o'riordan, rozalind macphail, samantha chang, Sarah Jackson, Sooyun Kim, Wissam Boustany
The Canadian Flute Convention took place June 18 - 21, 2015 at the University of St. Michael’s College in the University of Toronto. The 2015 Canadian Flute Convention triumphed with hundreds of events and activities which included concerts, lectures, recitals, workshops, and a flute market. This year’s motto was we “CanFlute”!   The performers certainly can and did flute, and the catchy motto gives a hint at the air of bonhomie that was present last year and back again in full force.  The CFC, organized by Samantha Chang, showcases the friendliness and good cheer that Canada as a country projects to the world.
Personally, I very much enjoy flute events as they provide a wonderful setting to get to know new friends as well as to catch up with old ones.  There was a variety of international performers from across the globe making this a most enjoyable convention.  However, even though the CFC is more intimate than NFA, it was still impossible to attend all the performances.  Here is a sampling of a few I was able to attend:
Niall O’Riordan played the Prokofiev Sonata, bringing his signature light touch to the work.  Gary Schocker played a concert of all his own works, again showing why he is one of the most innovative composer/performers of the day.  My first time to meet and listen to Wissam Boustany left me spellbound.  The top-notch performances also included, Michele Bellavance, Sooyun Kim, and Sarah Jackson on piccolo and many others.  There was so much going on it was impossible to catch everyone's performance.
I was able to attend a few of the workshops, too.  For example,  the Traditional Irish Music Session with Andra Bohnet.  It is impossible not to be perked up hearing Irish tunes.  I always carry a tin whistle in my Fluterscooter bag with me just in case the inspiration strikes.  Another interesting workshop  included Learn How to Loop Your Flute with Rozalind MacPhail,  which was followed by a wonderful presentation of the Electroacoustic Flute with Lindsey Goodman.
It is important for flutists to take advantage of the new technologies that allow us to expand our sound and surprise our audiences, and conventions like the CFC offer a great opportunity to learn new things, hear new pieces, and appreciate the artistry of our peers.   Hearing these first class performances and presentations was very inspiring.
The CFC has established itself as an organization where you can be reminded that awesome flutists are out there performing and creating new music and developing new techniques.  It was a joyous display of camaraderie and innovation.   Go Canada!
--Viviana Guzman