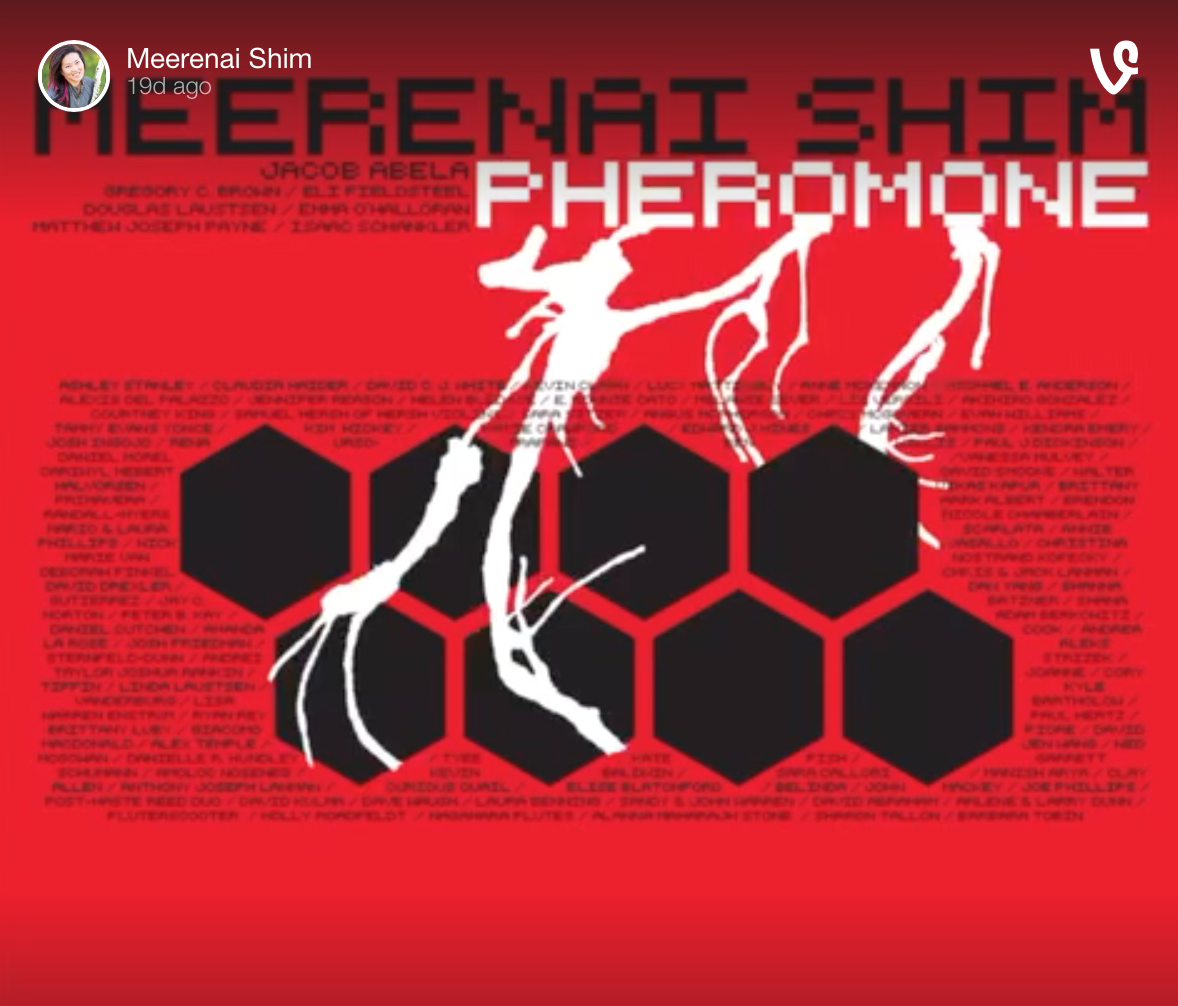 Pheromone is Meerenai Shim’s third album and the first released on her new Aerocade Music label, which she founded earlier this year. Her first two albums are fantastic but Shim has outdone herself with this latest release. Pheromone takes her playing to a completely new level. With the exception of the first track, which served as the inspiration for the album, all works were commissioned by Shim. All tracks considered, this electroacoustic album is greater than the sum of its parts.

Fractus III: Aerophoneme incorporates flute with live electronics. The electronics really vary throughout the work; at the beginning we primarily hear flute sounds and the electronics become more aggressively integrated as the track progresses. The composer states that this work explores themes of “self-exploration, transcendence, and divine retribution.”

In the next track, Huge Blank Canvas Neck Tattoo, the performer creates a backing track with loops and Ableton Live. The alto flute lends a different timbre to this work. According to the composer, this is a deeply personal work for him, inspired by “false starts and bad choices.”

Piano is included in the next work, Pencilled Wings, in addition to flute and stereo playback. It’s an intriguing work, which requires harmonics and breathy sounds from the flutist. Personally, I kept returning to this track over and over again.

Bass flute makes an appearance in 60.8%. It is combined with electronics. While I won’t give away the precise meaning of the title, it refers to political and economic situations in Greece. Consequently, this work has a Greek “feel” to it, as it was influenced by rebetiko, a type of Greek folk music.

Pheromone, the title track, utilizes flute, bass flute, piano, and electronics. The electronics take a backseat in this track; instead, the flute(s) and piano “[express] one idea simultaneously, but from diverging perspectives.”

Finally, the Etude for contrabass flute and TI83+ calculator is a fantastic and adorable ending. It clocks in at slightly less than two minutes but is chock-full of contrasting sounds (from the low contrabass flute to the high-pitched calculator) and timbres (acoustic versus electronic). It’s the chocolate truffle dessert after this substantial and highly satisfying meal of an album.