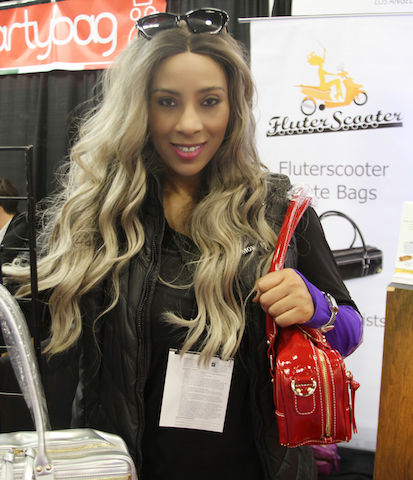 The NAMM Show is one of the largest musical instrument trade shows, which takes place in Anaheim every January.  This was my 5th show and my first one as an exhibitor for Fluterscooter bags!

My favorite part of the show is catching up with old flute friends and meeting new ones. Everyone has a unique NAMM experience, and I got to catch up with a few flutists at the show to talk about their NAMM experience.

Of all the music-industry shows around the world, NAMM has to be one of the biggest and most famous. For years I've wanted to go, and this year, I finally got my chance! 2017's NAMM show was my first one ever, and what an experience! It is by far the largest trade show I've ever been to (NFA will feel like a little village fair after this!), and though this is an article about flutists at NAMM, and most of you probably think of me as a flute player, I was actually there in my official capacity as a performing artist for Uebel clarinets. My primary function was to use my experience as a professional clarinetist and sort of "instrument wizard" to relate the features of these fantastic instruments that make them different from other makers to all the clarinetists who stopped by, and to demonstrate them whenever appropriate. It was an incredible few days, not only because I was able to, in a very direct and fulfilling way, work with quite a few fantastic players one-on-one and match them with the ideal instrument for them; but also because I ran into just about *everyone* I know in the entire music industry! It was like a huge party where everybody was too exhausted from working to be drunk, but still really happy to see each other and to be there.

Can't wait for next year! (I also never want to hear another trumpet or trombone again)

I have always dreamed of attending the NAMM convention since I first heard about it MANY years ago. My experience over exceeded my expectations by far. I was so excited and honored to have had the opportunity to perform at NAMM on behalf of Earthquaker Devices and Altus/Azumi Flutes.

So, what did I do exactly? I did what any gear junky would do! I walked onto the largest convention floor I have ever stepped foot on and hunted for Earthquaker Devices and Altus/Azumi Flutes. On my hunt, I was amazed at the tremendous amount of artists, artisans, and the sales staff of these small and large pieces of art we call instruments. Instruments of all sorts were alongside the various gadgets and tricks to make them or the player even better, enhanced or just plain fun toys. Throughout the weekend, I ran into some amazing artists performing their art right in front of me! I was constantly impressed and overjoyed to be around so much music!

When I found the Earthquaker Devices stage I was in heaven!  They had every pedal they make on stage for me to play with! WOW! I was like a kid in a candy store trying to decide where to start.  On top of that, my performance with Lisa Bella Donna was first!  I walked on stage and she asked me what I wanted to create!  Again, WOW! To even be on a stage with Lisa is an honor to me. Her music is entrancing and outer-worldly, just the way I like it! To combine our music was just outstanding and graceful. It was a wonderful adventure.

Each day of the convention, I also performed a solo show on the Earthquaker Stage. What was even more fun, was that l was able to perform some of my solo works to an audience who, like me, loves the artistry of Earthquaker Devices and/or Altus/Azumi Flutes. I am so very grateful to have had this opportunity and feel I have accomplished yet another dream.

I had the pleasure of meeting Kaylene Peoples, a fellow flutist/fashionista, and we interviewed eachother.  Kaylene runs her own fashion magazine, Agenda, and you can read her interview of me here.  It's always great to meet new, like-minded flutists!

Why did you decide to come to NAMM?

I'm here because I'm a musician and also a composer, and I work with a lot of different devices and wanted to see what the newest thing is.  But what really brought me here this year is that it's the first year that they're doing a Women's Conference for women musicians at NAMM.  I'm also one of the sponsors for Ilio, a sample library and virtual instrument company, since I score films.

Explain about your fashion magazine and blog.

I'm the founder and editor in chief of Agenda Magazine, which was founded in 2004.  I've gone to Fashion Weeks in New York City and Los Angeles for 24 seasons, and have interviewed over 300 designers.  I'm also a former runway model.  We just went print in 2014 and have over 3 million readers.  It's something I do as a passion, and I love it!

And as a musician?

I'm from Los Angeles and went to UCLA, and I have degrees in ethnomusicology and film scoring.  I'm an orchestrator, and I've written 3 symphonies and a ballet.  I've also done a lot of string arranging.  I started playing flute when I was 9, and I started improvising blues from a young age.  One day I heard Blue Rondo a la Turk from Dave Brubeck and memorized it at age 11.  My mentors were Hubert Laws and Dave Valentin.

Flute-wise, what are you up to now?  I see you've played with Hubert Laws?

I just did an album in 2015, which made the ballot for the GRAMMYs last year, and Hubert Laws is featured on the album, playing Giant Steps with Bobby Lyle.  I'm also singing on the album, which is called Kaylene Peoples "My Man."  I'm a singer/flutist, which is a rare combination.  I do straight ahead jazz, fusion, and some classic jazz.  I also have a 5 octave range.  I just got back from a jazz festival in Madagascar, actually.  Hubert is great, and I'd like to collaborate with more flute players.

What advice do you have to young musicians who are just getting out there now?

If you're a flutist and you're young, first of all, learn your craft!  Create a tone.  It's more important than learning a bunch of notes.  If you're trying to learn jazz, learn the most basic modal jazz in C.  And, most importantly, do what excites you!  There's a market for it, no matter what.