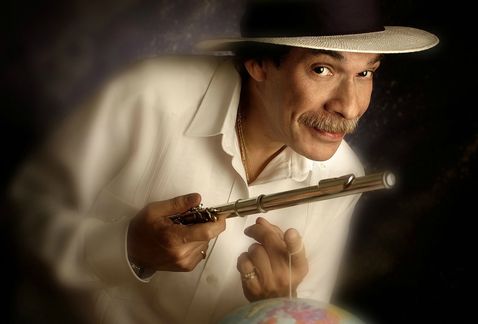 Dave Valentin was a pioneer of the jazz flute and passed away on March 8, 2017, but his musical legacy in both the jazz world and the flute world will live on.  We collected memories and stories from flutists who were influenced and inspired by Dave and his music.

Thank you to all who contributed to this tribute.

In Loving Memory of Dave Valentin

What I will always remember about Dave Valentin beyond his joyful musicality will be kindness, enthusiasm and a ridiculous sense of humor. I’m thinking back on one of the several times I heard him perform live. On this night at Los Angeles’ wonderful Jazz Bakery there were two sets. Since the second set had a little space, those audience members who had heard the first were invited to stay. Of course I stayed, and I remember laughing my head off even as Dave made the same exact jokes on both sets, with equal candor, silly delivery and vigor. The thought brings a smile to my face immediately. I loved the way he directed his outstanding band with large gestures that were at once playful and musical. He hilariously danced around even in between phrases of the melody, leaving the entire audience in stiches. Speaking to him after concerts, Dave always was kind and encouraging. I always left those concerts with a strong impression of Valentin’s contagious enthusiasm for music, and joy for life.

Dave Valentin’s playing always bore the core of his beginnings as a percussionist. He was the son of Puerto Ricans, born in New York City who began music at an early age and was already playing percussion gigs at clubs by the age of twelve. He learned flute in his late teens, to impress a girl, going on to study with the great flutist Hubert Laws. The percussiveness of Valentin’s flute playing is undeniable. His tone was dynamic and expressive, ranging from gorgeous and lush to raspy percussive to a clean, full, yet hollow tone that he laid perfectly into the mix of Jazz and Latin Jazz. His solos were often long and built up, and full of rhythmic intricacies grounded in his knowledge of Puerto Rican and Cuban music. Aside from his virtuosic flute playing, Dave Valentin was a pioneer in mixing Jazz and Latin music, creating new hybrid styles. Dave Valentin passed away on March 8th this year. His funeral reportedly included a gathering of the entire Puerto Rican community of New York. He will be greatly missed. We thank him for a legacy of innovation, showmanship and musicality that delighted audience members, and thank him for leaving a rich discography for us to enjoy even though his body has left this world. He was greatly loved and will be remembered.

Dave Valentin was perhaps the most rhythmic jazz flute player I had ever heard. He was able to bring a raw physicality to his playing that made his flute an extension of his body, which was always in motion. This made total sense, insofar as he was a percussionist before he switched to flute. No doubt his conga playing stood him in good stead, as it seemed like he was literally approaching the flute as a percussion instrument. Of course, he played with a prodigious technique and a rich sound, but he was all about the groove. After I first became aware of him from his Legends album (on GRP in the late 70’s), I knew he was the real deal; the complete package.

I never really got to know Dave personally, although we did share a concert together in the late 80’s at The Ordway Theater in St. Paul, along with the late Paul Horn. The three of us each did a mini-set and then played a couple of encores together. We got to hang out together on the shuttle from the airport and in the green-room, and I recall him having a tremendous amount of energy just sitting there on the bus; his legs, hands, and feet constantly in motion making grooves and beats. Unbelievable!

When I do clinics and master classes, I always try to get the students to think about rhythm, swing, groove and feeling by having them do flute, mouth and body percussion, which is something I definitely picked up from Dave’s approach. There seemed to be nothing that he wouldn’t try; a genuine chance-taker. Certainly, he had his influences as we all do, but ultimately he transcended them and came into his own as a true original. If you’re not familiar with his music, there are lots of clips on YouTube and I’m sure most of his catalog is online to buy.

The flute world is a lot emptier without Dave Valentin in it. He will be remembered through the incredible contributions he made to the flute world and music world. I, for one, feel fortunate to have crossed his path. Play on, Dave. Groove on.

The first time I met Dave Valentin was through a CD of his named “Sunshower” when I was in 9th grade (14 years old). I remember saying to my dad “what are those sounds? Looks like he is using a pedal for electronic effects” when I heard his solos with his iconic singing and playing. Like Galway and his unmistakable gold sound, Dave’s sound could be recognized anywhere! Nobody sounded like him… it was said by aficionados and musicians overall- a charming, warm and welcoming sound. I remember after transcribing all his solos and watching almost every video he had I finally got to see him perform in person. WOW!! His charisma, how he interacted with the audience and made them laugh with his percussive effects, he would achieve by slapping his cheeks (hahahaha). It was an entertaining night. Afterwards, I had my flute and went to the back; he invited me to his trailer and we sat for 30 minutes talking about improvisation, playing, learning his concept of sound production, life, and tips. That night, I still remember perfectly. A second time I interacted with him I started playing one of his songs (Obsession) and he picked my flute and we both started playing together. He laughed when heard me imitating all the sounds and effects that he used to play.

Dave Valentin made history as one of the most influential Latin jazz flutists in the world, and the best part? He is Puerto Rican!! His legacy lives through every living flutist who ever listened to him and to all of us who will have a piece of him in our hearts and in our playing. In my personal playing, it’s not possible to separate his influences in what I do, they are deeply ingrained. From his singing and playing, to his bamboo effects to his spontaneous crazy ideas, I inherited them all and I am proud of it. I am blessed I lived in this time; he will be forever missed and his music forever celebrated. Thank you, Dave.

I met Dave in high school at the High School of Music and Art. At the time he was playing Charanga music and I was playing jazz. I remember going to his house one day in the Bronx and I gave him a poem- I had a crush on him. Little did I know he had a crush on me as well but didn't tell me till years later. Fast forward a bit, he was working at a junior high school in the Bronx as a paraprofessional and I was teaching in an after school program at the same school. We used to go in the stairwell and play together creating all kinds of different sounds with our flutes. Whenever we played together, we would always play like that. It was great! A short time afterwards I got into playing Charanga music and Dave and I would see each other on the gigs quite often., There was always a playful banter that occurred between us; a nice friendship. Dave influenced me when I was playing Charanga music as he was a master in that genre. That was his first love. I remember seeing him in Caracas, Venezuela when I was living there and he had come with Conjunto Libre to perform. He gave me a cassette of his first record and he was so excited about it. The rest is history. He basically created the Latin Jazz style of playing the flute and people have been influenced by him worldwide since.We continued to collaborate, playing on each other's gigs, recording together, playing in a four flute project and so much more. I even composed some music that he recorded on one of his records. We had a beautiful friendship and he always called me his sister; su hermana and he was mi hermano. He will be sorely missed. As he always said on stage- "Are there any Puerto Ricans here? " People would scream out yes and he would reply, "Security!!." A jokester, a friend, a master musician, a brother; a man with many sides. God bless Dave, as you always said.

I was studying and pursuing my classical flute career at a state conservatory back in my hometown, of Ankara, Turkey. As well as being a classical musician, I was already interested in improvising over different genres such as latin jazz, bebop era and pop, etc...I was very curious on what else flute can do in terms of improvising and started searching flutists who do it already in the "jazz" era. I discovered Dave Valentin's music in 1996 and once I heard it, I immediately got very excited about his style, soul, and music, and started focusing on his playing and learned almost all of his music and transcribed his solos. I can say that the following 7-8 years, I spent most of my time with his music. There are days that I even annoyed my neighbors because I listened to the same tunes or solos of him (to learn) too much and they complained... :) I just love him a lot and can't get enough of his soul and his flute playing. Once in a while, I still get back to him to enjoy and learn more. I also had a chance to meet him in person back in 2002 with his band at an international jazz festival in Turkey. I still have the picture of that day and will never forget the moment I spent with him for a few minutes at the backstage.

Long story short, he is one of the reasons who I am today. He was and still is one of my foundations of flute playing as well as being a musician.  I can't thank him enough.  Rest In Peace, Dave.  Your soul, your music will always lead us towards the future to be better flutists and musicians.