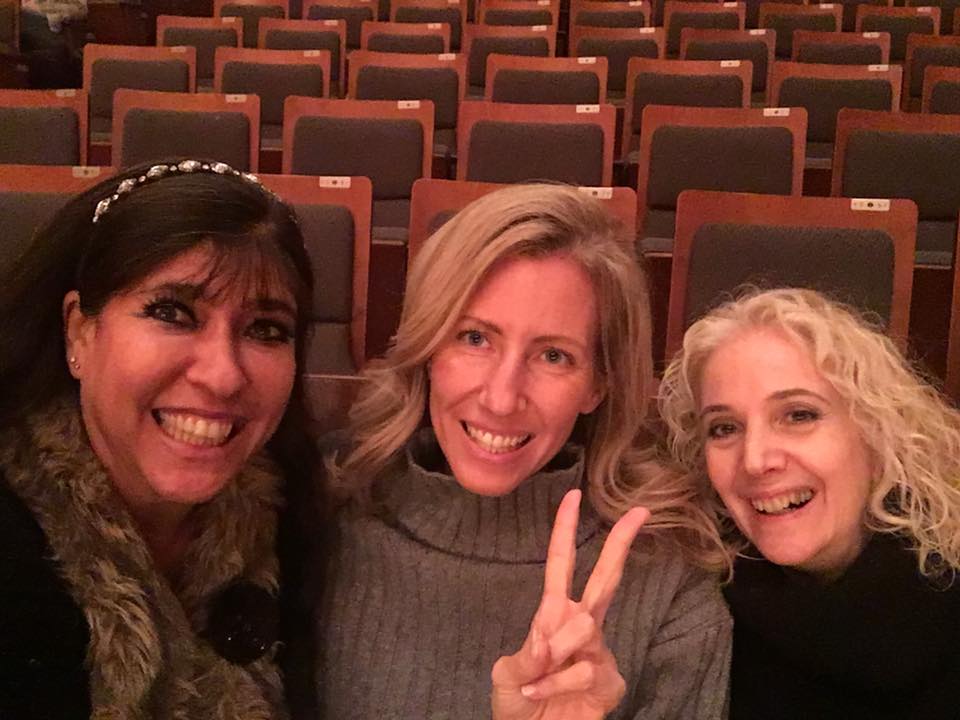 This past February, The Flute View was invited to participate in the Gonjiam Festival. Below we’re sharing our own personal experiences of the festival.

I was so pleased when Philipp Jundt (whom we met at the Galway Flute Festival) invited us to both perform, teach and lecture at the festival!  My first time in Korea (and East Asia) was in 1988 when I went to Seoul with the NYC Symphony as part of the Olympic Arts Festival which was tied to the ’88 Olympics, so you can imagine my surprise and sense of irony when it seemed that I would be back in Korea again during their hosting of the Olympics. My father talked about the Olympics often while I was growing up as he was a teenager during the 1936 Olympics in Germany and ran the Olympic torch through his hometown (he was an athlete and Jewish), so some more irony and joy too.

Back to the festival itself, I couldn’t wait to get there as I love Korea, the people, the food, the energy and this time didn’t disappoint. The trio was asked to perform on the opening concert at the Seoul Arts Center and decided that having a world premiere trio for flutes and orchestra would be a wonderful opportunity. We turned to composer Nicole Chamberlain (who was a winner of our composer’s competition) and asked her to write a new 5 minute trio for us to premiere in Korea!  It’s a wonderful piece, rhythmic, exciting, well orchestrated and fun to play, and includes, beat boxing, foot stomps and more.  The piece was conducted by charismatic Philipp Bernold, who conducted with preciseness, sensitivity and energy!!  We arrived several days early in Seoul to recover from jet lag staying in the lovely Shilla Hotel and immediately began rehearsing together since we live in separate cities and only had a few days.

First rehearsal with the excellent orchestra (one of the best in Korea) was the next day and we met some of our esteemed colleagues including legendary Peter Lukas Graf, Henrik Wiese and Philipp Bernold. When not rehearsing or practicing, I did a lot of sleeping and eating these first few days!! The concert itself was thrilling, well attended, in the beautiful 2500 seat hall, and most importantly I heard and met the rest of the stellar cast of flutists attending the festival!!

Hearing Anne-Catherine Heinzmann, Juliette Hurel, Sophie Cherrier, Henrik Wiese, Demarre McGill, Robert Dick, Peter Lukas Graf, Philipp Bernold, Philipp Jundt, Soohyun Paik, Sunghyun Cho, Seungho Lee, Rando Kim, Yerin Lee, Yunhwa Song, Ulkyoung Park was inspiring and exciting, so many beautiful players with their own unique styles.  In sharing all their names I want you to experience how many talented, musical artists where performing on the concert.  The Flute View trio was part of it and closed the concert!! The audience was very enthusiastic and we followed the Seoul tradition of appearing in the lobby right after the concert for congratulations and photos with the audience members, it was fun and fulfilled my dreams of being a rock star!!

The next morning after a celebratory evening we blearily boarded buses to take us to Gonjiam Valley where the heart of the festival is held. The festival is located in a beautiful conference center in the mountains outside of Seoul, the beautiful buildings designed by a famous Korean architect. Here all the faculty began working with 60 talented students from around Korea and from as far away as Germany and Russia. They had all gathered to have the opportunity to work with some of the most famous teachers in Europe, the US and Korea.

The students ranged in age from 13 to 22 and many were very accomplished young flutists,  the mountains rang out all day with the sound of flute!  Each day different flute dealers and companies came and shared their products including  Rio Kobayashi of Dolce Musical Instruments, Park Hyung Min of Mancke Headjoints, Song Headjoints and Roi Musical Instrument Co. The Flute View had a booth too and Fluter Scooter sold many beautiful bags, I had Green Golly CD’s and sheet music and Viviana had her terrific Grammy nominated CD’s.

There were concerts every night as each of the artists shared a concert, lectures and workshops as well as the lesson/masterclasses so that learning was happening 14 hours a day!!!

I was honored to give a workshop called “Being on Stage” which addresses how to connect with your audience, and overcome your stage fright with a series of meditations, and experiential exercises designed to free up the students. I enjoyed working with the students who, once they overcame their shyness proved to be adept at all the exercises and bravely played for us --  “before and after!”

I also participated in the new year’s concert called “Fantastic Flute” which was a concert of the flute music by Theobald Boehm which was held at the Gwangju Culture & Art Center in Gwangju, Korea. Another 2000 seat hall, this concert featured Ludwig Boehm, great grandson of Theobald Boehm giving a very interesting lecture on the composer.  I loved learning and playing the Boehm, Andante and a beautiful duet based on Mendelssohn’s beautiful song Ich wollt’meine Lieb’ergosse sich a wonderful chance for me to play a chamber piece by my favorite composer!!

In The Flute View’s own concert we each performed several pieces and I chose pieces from my touring repertoire that I thought would be a bit outside the box, we are The Flute View after all!

I performed Fredrick Kaufman’s “Meditation on a Lonely Flute” with (commissioned) video by visual artist Donna Cameron. Cameron, a pioneer in video and film art, painted each frame of film to go along with the Kaufman. This work is in the Museum of Modern Art library collection.

I also played “Bird Beneath a Shining Moon” a traditional Chinese piece arranged by Tan Mizi. Fluter performed an arresting improvisation based on Bach’s e minor sonata, played on the Native American flute and Viviana brilliantly performed a collection of Tango’s, truly an original concert!!

Before I close I want to mention the delicious food prepared by the chef and staff at the conference center; they prepared a wide variety of Korean food, with many different tastes and textures, and I’m trying to cook some of it at home.

And a special thank you and gratitude to Executive Director Soohyun Paik and Artistic Director Philipp Jundt for their tireless devotion to the festival, the artists, the devoted excellent staff, the audience and all things flute. You are both amazing, creative, visionary people and I’m so glad to have had the opportunity to work with you and contribute to the festival!

When we were invited to the Gonjiam Flute Festival, I was so excited about coming to Korea! I had only visited Seoul very briefly many years ago and was excited to debut at Seoul Arts Center with a commissioned piece written for us by Nicole Chamberlain, connect with fantastic artists from around the world, but mostly to go to lots of Korean spas, eat food, and ski (only half kidding here).

I was quite impressed with the high level of playing that I heard from all the students, mainly because I was in the exhibit hall most of the time listening to them try out flutes (I often am lucky enough to hear flutes and piccolos all day since I have a table for Fluterscooter Bags..) I was happy to show and sell many Fluterscooter Bags to students who had never seen them before.  I always love seeing the smiles on their faces after wearing their new bag.

The disadvantage of always working a table at a flute festival is not being able to attend many of the classes, but since Barbara covered most of that, I'll talk about my love for Korean spas and sauna.  If you don't know what a Korean spa is, it is not like your typical American style spa.  You go in there to sweat, release toxins, and bathe with strangers.  There are usually anywhere between 5 and 10 different rooms, each with a unique mineral like salt, jade, activated charcoal, etc...and each designed to help with different ailments; after leaving the sauna, you feel so much lighter, so of course I found a great spa upon arriving to Seoul to help with the long plane ride.

The concerts every night by all the guest artists were such a treat, and the small hall/cafe was perfect for the intimate evening concerts and to socialize afterwards.  I loved the architecture of the whole festival site in Gonjiam Valley; totally my style, a mix of modern combined with nature, lots of open spaces, floor to ceiling glass, and breathtaking views from every angle.  It gave the festival a relaxed and peaceful feel, which made us all comfortable.  Of course, Philipp and Soohyun's hospitality and organization was first rate from beginning to end and so grateful for this experience!

The Gonjiam Festival was a First Class Flute Festival from beginning to end.  It was an amazing confluence of flutists from around the world.  The Festival commenced with all of the Guest Artists featured in an All-Star Concert at the Seoul Arts Center with conductors Philippe Bernold and Peter-Lukas Graf. I very much enjoyed listening to all the young Korean talents as well as the rest of the international cast. The level of flute playing was exceptional throughout.  Our stay in Seoul was riveting with all the excitement of the city, and the meals were terrific!

We were transported into Gonjiam Valley where we all stayed at the Gonjiam Ski Resort.  Gonjiam Valley is a magical retreat center, a perfect place to host a flute festival.  Again, the meals were superb, and our hosts Philipp Jundt and Soohyun Paik were outstanding. And what a team with lead by Charles Ian Chun and Ikoo An!  What I enjoyed the most was listening to the different ways of teaching the masterclasses.  And, of course, the evening concerts were out of this world inspiring!  What an engaging mix of worldwide talents!  Each flutist bringing their own stellar spin.  While the Olympics were going on only a few miles away, the flutists who gathered gave equally rousing performances that could have earned their own medals.

The Gonjiam Festival was a premier experience that included talented flutists from age 9 to 90.  This exclusive event left everyone's hearts full of a desire to reach even greater heights, while celebrating a multi-cultural and dazzling experience.  A true Flute Olympus!