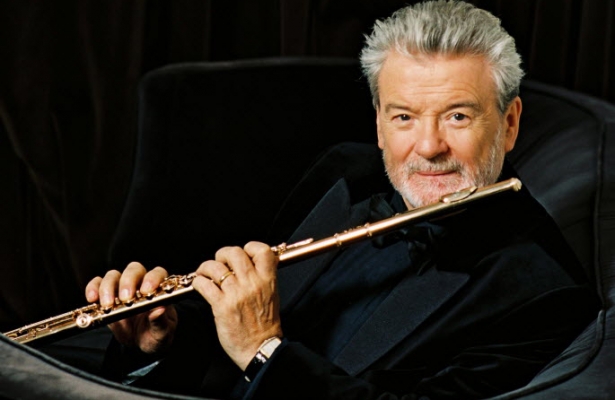 We honor and applaud Sir James Galway on December 8th, as he celebrates his 80th birthday.  A phenomenal musician and an inspiration to us all, Sir James has established a generous stage for flutists around the world. His colleagues, students, and  future musicians and admirers, are forever grateful for his contributions to the flute community.

It is hard to overstate how much a force Sir James Galway has been and is within the music world.  He has led a revolution in the flute world for decades,  influencing so many young flutists across the globe.  He carved a path bridging and blending classical, folk and popular music.  He is a complete entertainer, combining  his flawless playing with amusing stories to tell and lining his instruction with a joke or two.

Younger flutists may not recall how stifling the classical world's view of music was just a few decades ago. Sir James broadened the appeal of the flute by daring to cover a popular song, John Denver's "Annie's Song," which gained widespread popularity among people who had not had much classical music exposure, and particularly not to the flute as a "lead instrument."  This was my first Galway album and I listened to it repeatedly on my record player.  His consummate musicianship and perfectionism advanced his career into recording sessions with top orchestras, so that today when you hear a flute concerto played on a classical music station, it's a good bet that they will announce Sir James Galway as the solo flutist.  You can probably guess who contributed flute music to the Lord of the Rings trilogy.

My first encounter with Sir James was when I was 16 years old while attending the Aspen Music Festival, I had been selected to participate in John Denver’s NBC Music in the Mountains Special which featured Sir James Galway.  I was THRILLED to have been selected!  Two years later, when I was 18 years old, I was selected to perform in the Galway Masterclass.  I remember we all gathered in a church to hear the sounds from his flute and his teachings.  I recall it was a warm day, and I had decided to play the Carmen Fantasy.  We had been instructed to play everything memorized.  This experience changed my life.  From this moment forward, I always strove to perform without referring to sheet music, and for this, I am so thankful.  I encourage my own students to perform memorized, as it enables them to really learn their pieces.  It also removes a level of distraction between the audience and the performer, who can be seen to relate directly to the music and the audience rather than be consulting with the music.

Sir James' festivals and masterclasses have inspired future generations of flutists, and his recordings will continue to be a testament to his gifts as a performer.  In the world of tango music, it is common to draw a line between the period before the great Astor Piazzolla and the period after, as Piazzolla has had such a huge influence upon the genre.  A strong case can be made that there is a similar demarcation to be made between before Sir James Galway and after he came on the scene for the performance of flute music, in whatever genre.  Fortunately for us, he is a living legend and, along with his lovely and talented wife Lady Jeanne Galway, continuing to inspire and create.  We at The Flute View wish The Man With the Golden Flute a joyous 80th birthday this December 8, 2019, with many more stanzas to come. I listened to Sir James Galway for the first time in 1981. He played Bach's 7 Sonatas and it was a concert that definitely changed the idea I had of the flute. Since then, I always try to be inspired by his art, even with the piccolo: his sound is unmatched, his perfect legato, his pure staccato and his enormous idea of "singing". Thank you, Sir James Galway, for all the good you did for me and to all flutists! I remember as if it were yesterday: Christmas 1995... Under the Christmas tree I found my first James Galway CD, freshly brought to Germany from the USA by my father as a special gift... And while my classmates in the following years were crazy about the music of Michael Jackson and the Backstreet Boys, I couldn't get enough of the incomparable sound and the unique joy of playing that I could hear on each of Sir James' countless CDs which were following his first Christmas album.  I never dreamed at this time that he would invite me to his festival in Switzerland many years later and he would even award me with the Rising Star Award in 2016. Thank you for accompanying me so intensively and always inspiring me my whole life so far! Getting to know Sir James personally, as a mentor and teacher is one of the most important milestones of my life! Happy Birthday Sir James and thank you for your music! May you continue to inspire all of us for many years to come with your unique art of playing the flute!!!!  Always with admiration and love, Barbara The flute may be one of the most difficult monochromatic instruments to succeed outside of the orchestral setting.  Major composers mostly wrote for the great solo singers, pianists, cellists, and violinists... until now.

Sir James revolutionizes modern solo flute-playing using the flute akin to the projection of a Heldentenor. The uniqueness of his timbres, flawless technique, and impeccable control continues to influence several generations of not just flutists but all musicians. Audiences worldwide love his art and students from countless countries attend his masterclasses.   His artistry reflects the great emotions and depth of character of the music which he interprets through his own unique voice. For trained ears, one need only hear one note to know you are experiencing the life’s breath and mellifluous tonalities of James Galway through his golden flutes.

It is an honor and great privilege to have James Galway consider me his friend. I wish him a wonderful 80th birthday celebration and many more!—Alan Weiss, Artist-in-Residence, William S. Haynes Company I first heard Sir James Galway while I was still a student and he was a member of the Berlin Philharmonic. I was astonished by his impeccable playing, beautiful sound and musicianship! I was so thrilled to meet him shortly afterwards when he came to teach at the Julius Baker Masterclasses. Throughout the years whenever it was possible to hear him play or attend a master class he was giving in New York City I made sure to attend. Every time I heard him play or teach I learned something new that transformed my playing. It has been a thrill in recent years to have the opportunity to spend time with my hero at the Galway Flute Festival, where he continues to be an inspiration to me and to so many others. Thank you Sir James!!! I will never have enough words to thank Sir James Galway for all of his support and mentorship during the last years of my career as a student and my first years as a professional player. I consider myself a very lucky flutist who had the chance to grow listening to his music and, once I was ready, to work with him. It all started in Weggis, 2011. Months before, my former piccolo teacher, Nicola Mazzanti, suggested I apply for the Festival, but I wasn’t sure if I should send a recording of myself to the Galways. And I am glad I did! I remember how my heart jumped when I received the notification that Sir James had chosen me as an active student for his course. Eight years later, I am no longer that scared girl that didn’t know if she was strong enough to become a flutist. I am aware Sir James was a huge influence, for all these past years since I started working with him, my goal was to learn, to improve, and to become a better flutist and human person, because, in the end, music comes directly from the heart. I am grateful to carry the Galway Flute Academy name wherever I go and wherever I play. It’s both a responsibility and a gift. Thanks from the heart, Sir James, I am here today thanks to you. Growing up and playing the flute behind the iron curtain was a much greater challenge than is known in the developed western world. We hardly received any information from the West, at the same time, we lived our everyday lives undisturbed. But in the early nineties, when I became more interested in the flute, I suddenly realized who “The Man With The Golden Flute” was! There is no other person on planet earth who has inspired as many flutists as him. From that moment on, my only goal was to play for this man at least once in my life. When I played the Liebermann Sonata for him in Weggis, my life changed forever. 2019 is a special year for me, 25 years in touch with Sir James and Lady Jeanne, playing 5 times in Weggis at the Galway Flute Festival, particularly at the 30th Anniversary Festival celebrating his 80th Birthday. You can't ask for more! God bless Sir James! And long live the Galways! Words can not tell the value of Galway to me. As someone who spent his childhood listening to the magical sound of Galway, staring at its posters and studying the flute, I had no idea they would touch my life so beautifully when I studied with him at the age of 15. They have never denied interest and support with Jeanne Galway. They shine a light on me in my professional career with the vision and the courage they gave me. They made me feel like they were always with me with their big hearts. Receiving education from him is my one of the biggest chances in my life. I'm very honored to have the chance to be his student and  I am proud to be in Galway Flute Academy Family. My precious mentor always with his valuable knowledge, light of my life with his endless support. Lady Jeanne and Sir James Galway cannot be expressed in my gratitude words. I'm always grateful to you deeply in my heart... Thank you to Sir James, Lady Jeanne, and the Galway Flute Academy and Galway Flute Festival for providing photographs.