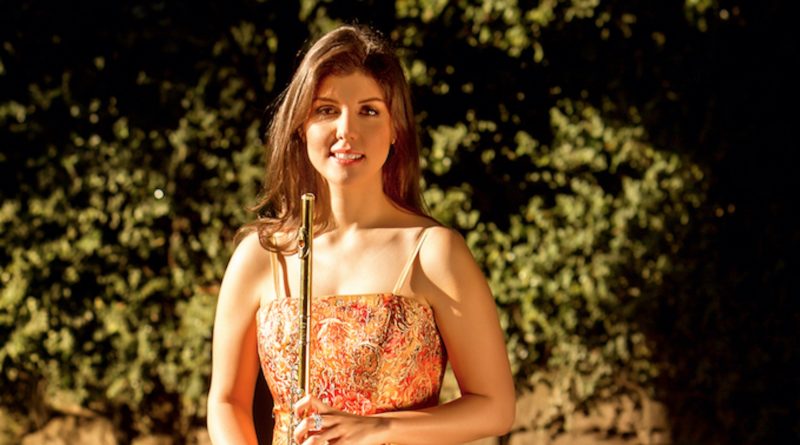 Many moments were really important in my career, but if I have to name just a few, I would say that winning both the first international competition I did and the first orchestral audition as well were two of those. I am speaking about the first prize at the Carl Nielsen competition in Denmark, ten years ago; and my first job, as Assistant Principal Flute in Paris at the French National Orchestra. After that, winning joint top prize at the Geneva Competition and two jobs as Principal flute in Rotterdam and then in Rome were very important moments in my professional career.

Meeting Vicens Prats, principal flute of the Orchestre de Paris, at a Masterclass, when I was a fifteen-year-old student in Portugal, was a pivotal moment that made me believe that I could be a professional flautist.

Starting to study with my main flute professor, Sophie Cherrier, was the moment in which I discovered a new approach to music and to the instrument. That totally changed my perspective in a positive way and influenced me profoundly.

As for the last pivotal moment, I would say that when I got my first job, I felt a new responsibility of playing the best I could not just for myself but also as part of the group. I felt (and still do) that what I do when I play is influenced by others but it also influences them, so, I understood that as an active part of the group, I have to stay respectful to the composer ideas and emotions, and to the main importance of the group rather than myself.

The day of the concert with all its preparation, the emotional fulfillment, the joy of sharing with an audience, the joy of (also) playing for myself, the amount of thoughts generated in the practice and then the freedom of the moment when you are on stage...

I have released three CD’s, the first two with pianist Isolda Crespi Rubio for Numerica and Falaut Labels, where we recorded works from Prokofiev, Poulenc, Debussy, Dutilleux, Bonis, Andersen, among others.

On the last CD, that I recorded with pianist Lorenzo Soulès and the Geneva Chamber Orchestra, for Claves label, we recorded the C Major Vivaldi piccolo Concerto as well as the Nielsen Flute Concerto, chamber works from Schubert and Jolivet, and a contemporary japanese solo piece by Fuminori Tanada.

For now, I am working on some ideas for an eventual next release.

I always try to be a better human being and a better musician. I truly believe that being a good person affects positively my playing. So, for the future, I hope I can evolve each day.

The nature, a kind action when I observe one, my family and my close ones. I would say that love is the most inspirational thing for me regarding everything.

What has been your greatest challenge professionally?

Changing from one orchestra to another, the necessity of learn how a group interacts  musically, the research for the sound that better fits in the group, the kind of articulation, the volume... Every orchestra has its own tradition and habits, and you’ve got the responsibility to always give priority to the group rather than yourself when you are in there, and that’s a big challenge when you’re a new member.

What has been your greatest challenge personally?

My greatest challenge personally has been moving from country to country for professional reasons. It all started ten years ago, when I left Portugal to study in Paris. Then, I lived in Berlin, in Rotterdam, and now in Rome. I absolutely love to travel, but moving from a country to another is something else... it requires time, organization, learning a lot about the new country and always being far from my family, among other things. At the end, it is a spectacular positive challenge, I think in ten years I have learnt a lot.

My main music mentors were my flute teachers, Joaquina Mota, Sophie Cherrier, Vincent Lucas and Benoît Fromanger. I learnt from them first the aspects related to flute playing, but then - and most important - the way to approach music, how to study, to listen, to focus, to always search for the beauty, to always have a musical conscient idea behind any phrasing, the importance of staying fresh but always absolutely in the music, among many other things.

I also felt very inspired by the lessons I had with Sir James Galway. As many flute players, I grew up listening to his recordings. His sound is absolutely unique and he has always been an inspiration for me.

I am also very grateful to flutists Ana Maria Ribeiro, Sophie Perrier, Vicens Prats, Michel Moraguès, and clarinetist Michel Lethiec. With them I had lessons or masterclasses through my years as a student and they really gave me very good advices that inspired me a lot.

My main hobbies are walking in the mountains, traveling and discovering new places, reading, eating chocolate just before the concerts, and... cooking desserts!!!

To begin with, I would say 1) to always try to be the best you can without looking to the others. That’s something I was told when I was very young and which has been guiding me for many years. We should be and play the best we can, but without comparing ourselves to anyone. I feel inspired when I listen to a gifted musician, and that always make me learn. That’s the beauty of music - to inspire and be inspired.

Then, the hard part is 2) to always keep practicing, but without forgetting the most important: it’s supposed to be something that makes us happy. Try to do your best, practice as better and as much you can, but at the end, 3) don’t forget to be grateful and happy for what you do.