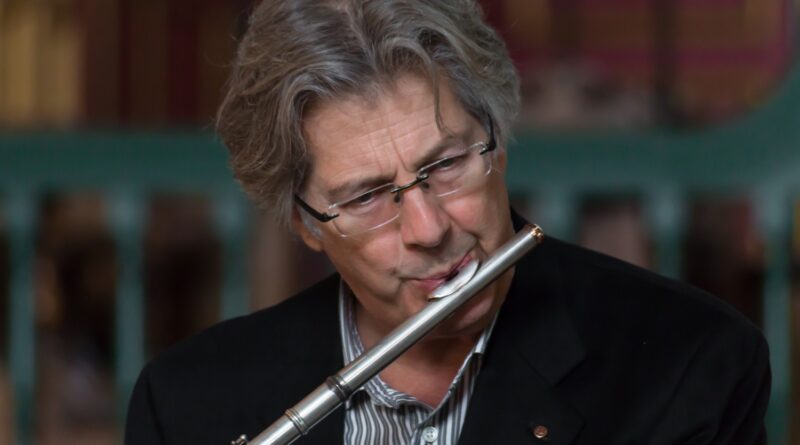 Paul Edmund-Davies established his international reputation as flautist and soloist in the 20 years that he was Principal Flute of the London Symphony Orchestra and then the five years in the same position at the Philharmonia Orchestra.  Paul Edmund-Davies has edited and published more than 25 books of flute music. His ‘The 28 Day Warm up Book for all Flautists…eventually!’ is a best seller and has been translated into Japanese, Spanish and Russian.  In 2015 Paul launched his online flute education resource, Simply Flute. The site provides both free and subscription materials to help flute players and teachers on their respective journeys.

We see so many wonderful publications on your site!  You have so many different arrangements and editions of popular flute works.  How did all of this come about?

At this stage of my journey through life, so many rich and varied things have happened, that if I had been told as a child what was in store for me in the future, my jaw would have dropped in disbelief. When I look back on my life I still have to pinch myself to remember just how fortunate I have been!

Whilst some do make large amounts of money as classical musicians, this is not so common for the majority. However, irrespective of financial success, I believe those involved in music to be amongst the most fortunate people on the planet.

I am now not far from an age, where many around me who aren’t musicians are close to retiring from jobs, which by their own admissions, have not been entirely fulfilling. On the positive side, they have earnt incredibly well over the years, providing themselves and their families with beautiful houses, luxury cars and suitably generous pensions.

Whilst they look forward to breaking the chains of a 9 to 5 office job, they are also more than slightly nervous of what might be in store for them in the coming years (other than slippers warming up nicely next to the fire). Some find themselves staring into a void of inactivity, their imaginations drained by years of boredom coupled with a lack of motivation to prepare for the very different life ahead.

Musicians however, blissfully exist from one moment to the next, with the knowledge that every new day will arrive with fresh adventures and challenges. We don’t retire or even contemplate it, we go on until it is no longer physically possible to express ourselves. Then, we simply fade away.

I started my journey with the flute at the age of nine and as I have become older, I have enjoyed the process of transition from student to professional and professional to teacher.

Living in London, there is no shortage of institutions for advanced musical education and over the years, I have taught at most of them.

In the late 1990s I was teaching at the Royal College of Music and when I asked students to prepare a Bach Sonata for the next lesson, an acute air of fear invariably filled the room.

Because Bach belonged to the Baroque era and at that time music from this period was increasingly being performed on authentic instruments, they were terrified as to how to approach it! How short or long should notes be? What do you do in the absence of dynamic markings? Should these notes be slurred or articulated? The list went on and on. In brief though, they were paralysed with fear.

Whilst I could understand their anxieties to a degree, the lack of both curiosity and enthusiasm  for some of the best and most joyful music ever written for the flute, was nothing short of alarming.

Something had to be done!

A music publisher had approached me a few years prior to this moment, to put together a series of compilations of flute music. Named The Flautist’s Collection, the three volumes printed thus far had sold quite well.

He was also interested in expanding his catalogue of flute music further and when I suggested that we embark on a series taking music from the Baroque period, but editing it to be more accessible and user friendly for modern day flute players, he was genuinely enthusiastic.

I have now produced more than 20 titles through Kevin Mayhew Ltd and all of my Baroque period editions are there, not in any way whatsoever to be compared to the Urtext editions, but merely to provide a more recognisable platform, in order to encourage insecure or anxious flute players to dip their toes into this sparkling pool of amazing music.

As well we all know, music is an organic form and no two performances should ever be the same! However, some morsels of guidance as to how to approach these magnificent pieces with greater confidence from go, can surely be no bad thing? So far, all of the Bach and Handel Sonatas have been completed (with performance and play along CDs), as well as numerous Telemann Sonatas for two flutes and of course the 12 Fantasias.

I am very happy to have had this opportunity to get these editions out through a recognised publisher. However, these days I now publish my own books and find various sources for distribution. As I discovered when making my own CDs, yes there is much to learn, but in the final analysis, it isn’t exactly rocket science!

If anyone reading this article is contemplating putting their work into print for sale, I can highly recommend the self-publishing route. Apart from anything else, you will find it to be a fascinating journey.

You are a true Fluterpreneur!!  How did you acquire these skills?  Might you have some advice for a budding young Fluterpreneur?

Now there is a tongue twister if ever I saw one!

As these two questions are intrinsically linked, I will answer them together as best I can.

In many ways, these are the most complicated questions for me to answer thus far, as I have never considered myself to be a ‘Fluterpreneur’ and am quite flattered that you feel that I can even be placed in that illustrious bracket. It sounds nice from over here!

Many things in life happen, but not just because we have an active plan. The circumstances surrounding us, the people that we meet, the journeys and even the risks that we take, are all part of the Rubic’s Cube of life.

As a student, I never would have thought that one day, I would be the principal flute of the London Symphony Orchestra. My belief was that I got lucky that day and just happened to be in the right place at the right time! At least, to me, that was what it felt like when it happened. I celebrated with a take away burger!

Equally, I would never have imagined that I would one day strike out on my own. I have a propensity for caution, but equally, no time for boredom. It would appear though that over the years, I have been quite capable of unknowingly following my instincts. Sometimes this has worked in my favour, but more often than not, a wrong turning has been made and I have lost out. Whilst this is unfortunate, as we would all like our projects to turn into gold, it hasn’t bothered me one jot. The most important part has been the journey and the discoveries made on the way. Nobody died in the process, so there is plenty to like about failure. After the knocking down, the only way is up.

I am no great philosopher, but if at all possible, life really should be a sequence of journeys and in reality, the time that we have here is so incredibly brief. When I realised whilst writing this article that the concert that I played in with Leonard Bernstein conducting in East Berlin, happened 31 years ago this Christmas, I was close to horrified as to just how quickly time has gone by. I am not so over confident that I will still be around in 31 years from now.

Life therefore is to be grasped with both hands and in the final analysis, knowledge is King. The more that you discover and the more you build your own mountain of enlightenment, the greater the potential to take a journey down a less well trodden path and to not find a dead end.

Perhaps the key word in all of this is ‘curiosity’. If we can be inquisitive about life, rather than simply accepting what happens to us on a day to day basis, our lives should by definition be richer.

Is it also possible that we rely too heavily on others to inspire and motivate us? I now love history and the narrative of how we have evolved as a species over the centuries, and have learnt so much that otherwise would have passed me by. This has been as a result of my own curiosity (and a deep love of all matters Champagne related, but this too will need to wait for another day!).

However, when I was at school my history teachers could not have made the topic more dull and uninteresting. In short, although they were incredibly knowledgeable and well educated, they were incapable as humans of bringing their field to life for others. In all subjects, sadly this is too often the case. If we cannot communicate our passions well, why would anyone be interested to listen to them?

Happiness is crucial in life and I don’t simply mean having fun. If you are involved with something, such as a job, that doesn’t bring you happiness, or actively makes you unhappy, stop doing it.

Try to make your initial rection to new possibilities positive. This doesn’t mean that in the end you have to say yes to everything that occurs in your life, but none of us gets very far if we are constantly closing doors in front of us.

One of the great joys of my early days of touring, before every hotel in the world was built in an identical fashion, was arriving at an old hotel (preferably in Italy) and collecting the heavy brass room key from reception. Between there and arriving at the door of your room, the mind was merrily ticking away, wondering what was waiting for you on the other side. Would it be large or small? Would there be a balcony or patio? Would there be a stunning view? Would it have the most amazing shower? With the heart noticeably pumping faster, the key was turned, the door opened and in you went. Naturally, most of the time disappointment was the first reaction, but once in a blue moon, a gem would turn up, making it almost impossible to leave to go to the concert.

And my final piece of advice…Be nice to people on your way up, because you are going to need them on the way back down again! After all, being nice to people in life, really isn’t a crime.

They say that ‘Curiosity killed the cat!’ Well, it might well have done, but for the time being at least, it is keeping this steadily ageing flute player very much alive and kicking.