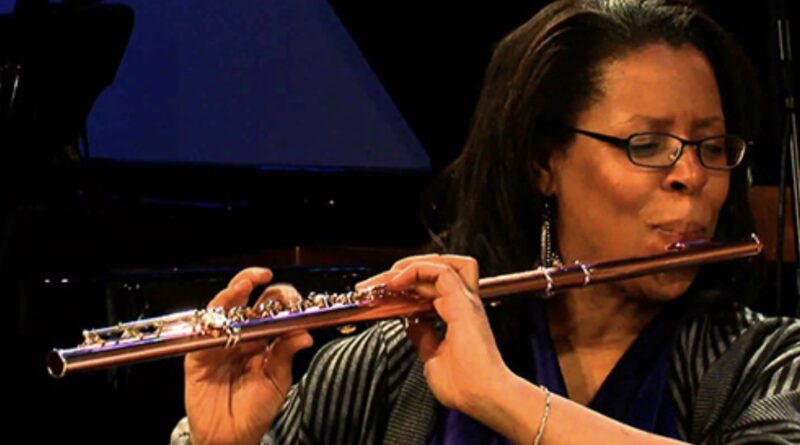 Valerie Coleman is a GRAMMY Nominated flutist and composer and Performance Today’s “2020 Classical Woman of the Year”. Her visionary mind is responsible for the creation of the iconic ensemble Imani Winds, its chamber music festival, and a wealth of repertoire that has become a cornerstone legacy within American chamber music. A native of Louisville, Valerie is an alumna of Concert Artists Guild, CMS Lincoln Center Two fellowship, is listed as “one of the Top 35 Women Composers” by the Washington Post and is the first African-American woman to be commissioned by the Philadelphia Orchestra and the Metropolitan Opera.

Can you give us 5 career highlights?
To be onstage performing with Jazz artist Wayne Shorter was one of the most amazing experiences in my life, as I had the opportunity to witness a giant performing his iconic works; it forever changed the way I performed.  Another big career highlight for me was writing for the National Flute Association's High School Young Artist Competition, which resulted in the creation of the work, Fanmi Imèn. Writing this piece gave the opportunity to send a message of unity as inspired by the words of Maya Angelou in her poem, Human Family. Having historic firsts are highlights that I could not have imagined, but I was recently the first African-American woman to be commissioned by the Philadelphia Orchestra. With my composer colleagues Joel Thompson and Jessie Montgomery, we three are the first African-American composers to be commissioned by the Metropolitan Orchestra.

The first time I picked up the flute in 4th grade, the first time my music was recognized as a valid, viable work by Doriot Dwyer at Boston University Tanglewood Institute, and the creation of Imani Winds.

What do you like best about performing?
I love being the vehicle to which a story can be told and shared, and breathing through the music in a way that it becomes alive. Performing allows music to become our companion.

The thing I like best is the birth of a new work, from the moment within the process that a certainty of direction manifests and the work begins to form personality and write itself, to its launch into the world.

It is an honor to witness and participate in arts engines across the country as they create ingenious ways to survive, and my upcoming schedule includes virtual visits, competition adjudications and commissions. I am extremely excited to connect with our beloved flute community as a guest artist for Greater Portland Flute Society 4/10, Seattle Flute Society 4/11, Austin Flute Society 4/17, San Diego Flute Festival 5/22-23, and Amy Porter's iconic Anatomy of Sound Flute Workshop from June 5-8th. I will be an adjudicator for Fischoff National Chamber Music Competition 4/14-16 and Concert Artist Guild Annual Competition. Upcoming commissions include 2 new flute quartet pieces! One for Anatomy of Sound and the other for the Boston Celebrity Series. Other upcoming commissions include a new work for the Philadelphia Orchestra, Sphinx Virtuosi, and an opera for the Metropolitan Opera New Works Initiative.

What are your goals professionally?
My goals are to cultivate and advance the culture of hybridity within myself, academia, and the music industry. From there, I try to stay open to wherever that leads me, but it involves taking it as far as I can with pedagogy, touring, creating and recording new works. This path is not yet a fully paved and traveled road, but it is so inspirational to see flutists at the forefront of creating and performing, like Allison Loggins-Hull, Nicole Mitchell, and Nathalie Joachim. Their music IS the evolution we have all been waiting for.

My personal goal is to be all that God means for me to be, which has yet to be revealed.

Performing with artists who are able to transcend through music and their own beliefs on and off the stage, introducing students to new paths, and creating works that take on a life of their own.

My greatest challenge has been to champion a path of hybridity regardless of the societal messages within academic and Classical music circles. Hybrid artists face the stigma that the merging of disciplines resorts to not being good enough within either, despite evidence that proves otherwise in some of the greatest composers in Classical history, especially flutist-composers! I firmly believe that hybrid artists have a substantial role in the advancement of music. In learning to walk with humility and grace in the midst of all situations, and making the effort towards supporting each other, we not only survive but transcend.  To that, I am floored and humbled by the support of the flute community to which I owe so very much, and want to take this time to say thank you from the bottom of my heart. I am so very proud to be counted amongst your ranks.

Who were your music mentors?  and what did you learn from them?
Ah! From Doriot Dwyer, I learned a fierce determination, from composer Tania Leon, I am learning all about the legacy of Black composers and the responsibility I have to pass along this legacy to younger generations.

What 3 things would you offer as advice for a young flutist?
1. Celebrate all the tiny moments of discovery as you develop your sound and learn new notes - savor the exploration! It is a priceless moment that you get to only go through once.

2. Each new song you learn is a gift -sing it out and let it shine brightly!..and if you hear a melody in your head, heed it and give it a voice on your flute.

3. Compete with yourself and not with others.