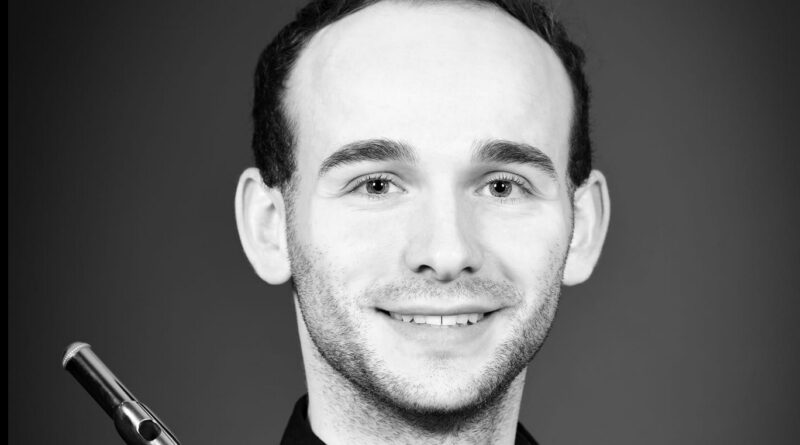 Flutist Dustin White has made it his goal to explore the intersection of Western contemporary art music and non-Western flute traditions. His recently released debut solo album, Ri Ra (Mon Hills Records), features works by Iranian and Lebanese composers that reflect the union between Middle Eastern musical aesthetics and Western contemporary compositional practices. White has thoughtfully curated his album to showcase compelling selections from the past 20 years of flute repertoire.

Parisa Sabet’s Nava Nava (The Song of Nay), inspired by Iranian nay player Maestro Hassan Kassai, opens the album with delicate whistle tones that evolve into a soulful melody on the alto flute. The addition of reverb adds just the right amount of otherworldliness. Nava Nava leads directly into Erfan Attarchi’s Parineh—the Persian word for “ancient.” Attarchi frames the sounds of a Persian flute in a contemporary context, employing multiphonics, percussive effects, and air sounds to manipulate the timbre of the flute. Throughout, White brings out the contrasts between fragility and intensity for a compelling listening experience.

Sami Seif’s three-movement Miniatures from Phoenicia combines Seif’s curiosity about linguistics with his interest in his ancestors, the Phoenicians, who created the first phonetic alphabet. The title of each miniature corresponds to one of the main phonological groups. “Vowels” develops a melody built from a quarter-tone tuning system, colored by pitch bends and the flutist’s voice. Appropriately, the structure of “Plosives” comes from the explosive attacks that initiate each phrase. In “Sibilances and Fricatives,” a dramatic opening immediately recedes to a calmer sound world in which Seif plays with timbral textures via flutter tongue and a variety of air sounds. The use of quarter tones in this movement is striking, and White demonstrates his control of the instrument by shifting seamlessly between air sounds and a rich low register.

Iman Habibi’s Surge pulls in the listener immediately with a rhythmic opening shaped by the percussive sounds of the solo flute, including tongue rams and pizzicatos. The constant evolution of sound keeps the piece moving forward, suddenly coming to a close when White delicately executes the surprisingly fragile ending on a pianissimo C6.

Ata Ghavidel’s Ri Ra I, from which the album derives its title, is inspired by one of Nima Yooshij’s most celebrated poems, in which the poet speaks with someone unknown to the audience. Ghavidel’s melodies leap around the instrument and are juxtaposed against more delicate multiphonics and quarter tones. White inhabits the role of storyteller in animating these many contrasts. I found myself wishing for a more detailed description of the poem to complete my listening experience.

Bringing sonic variety to the album is Wajdi Abou Diab’s The Awiss Dance. Abou Diab writes beautifully for the bass flute, playing to its strengths as both a melodic and percussive instrument. The opening combines short melodies with vocal drone in a Mawaal, a group of improvised phrases common to traditional Arabic performances. The fast-paced rhythmic selections, based on the traditional Arabic rhythm Al Awiss, are riveting. Abou Diab requires the flutist to play numerous techniques in rapid succession, a challenge in coordination and endurance that White tackles with energetic precision.

Finally, in Dialogue du silence, Katia Makdissi-Warren embraces the flute’s melodic side, crafting warm melodies alongside textural percussive techniques. The piece is inspired by an Arabic improvisation form called taqasim (literally, “division of time”) and emphasizes the importance of silence. The lengths of the silences that punctuate the phrases are left to the discretion of the performer, and White captures the spirit of the music in his thoughtful choices about the pacing of the piece.

In its entirety, Ri Ra highlights the versatility of the flute to evoke sounds of the Middle-Eastern instruments, and the narrative of each composer’s relationship to both traditional and contemporary music brings cohesion to the album. The high recording quality combines with excellent performance and repertoire choices to create an album that is worth a listen.