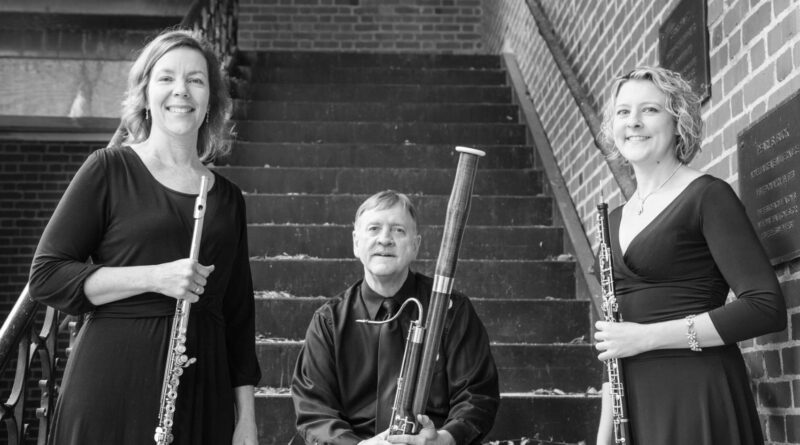 The Athenia Trio, comprised of flutist Alison Brown Sincoff, oboist Michele Fiala, and bassoonist Matthew Morris, is a faculty wind trio at Ohio University in Athens, Ohio. The trio has performed together nationally and internationally since 2009, with a focus on expanding the woodwind trio repertoire and engaging audiences in new ways through multimedia and interactive performances.

The Athenia Trio celebrates the versatility of flute, oboe, and bassoon trio repertoire through a collection of charming works on their recent album Brush Strokes, released by Navona Records in December 2020. While only one piece on the album is entitled with the term “miniatures,” each movement on Brush Strokes might also qualify: the longest comes in at less than four minutes. Even more true to the “miniature” spirit than length is the distinct, focused, and characterful quality apparent in each movement, which provides the trio an opportunity to showcase their dynamic range as individuals and as an ensemble.

The album opener, Four Miniatures for Woodwind Trio by Clyde Thompson, begins with a bright and inviting fanfare. Neoclassical elements are woven throughout the four movements, and the flute, oboe, and bassoon are balanced to show the beautiful clarity of lines and transparency of voices that can be achieved with this combination.

Alyssa Morris’s titular Brush Strokes, a new work commissioned by the Athenia Trio, is inspired by specific techniques or works of four well-known painters: Monet, Seurat, Van Gogh, and Pollock. The Seurat movement cleverly employs staccato textures to reflect the pointillistic technique for which the painter was best known. The final movement responds to Pollock’s style of “action painting” through quick gestures and outbursts tossed around the ensemble, just as Pollock flung and splattered paint onto his canvases. Even with these individual flourishes, voices of the ensemble often come together in shared lines – almost as if a viewer inspecting Pollock’s work up close suddenly stepped back to take in the complete view of the painting.

The Athenia Trio commissioned Robbie McCarthy’s The Blind Men and the Elephant on the ancient parable that illustrates our human tendency to claim absolute truth from our subjective, limited experiences. Each movement begins with a brief narration describing the experience of each blind man encountering an elephant for the first time: the man who touches the elephant’s tusk believes he is holding a spear, while the man who touches the elephant’s tail believes he is holding a rope. The music in each movement deftly responds to the specific encounter it describes, presenting a strong narrative focus and colorful, clearly defined characters. The snake (the elephant’s trunk) of the third movement is particularly effective as it wriggles and writhes throughout the music. One could easily imagine this narrative work translating to an enchanting live experience for audiences young and old.

The final work on the album, Eduardo Grau’s Trio de la Fiesta Mayor, references an annual Spanish festival celebrating the specific patron saint of each town or village. The opening “Preludio” shifts between a feeling of duple and triple meter, allowing the trio to be particularly playful in their interpretation of the music. The “Tamboril” is highly ornamented – quirky carnival music that sounds like a true joy to play. The modal quality and the dance forms of several of the movements reference the historic roots of the fiesta mayor, but the bright and brilliant instrumentation of the trio provides a fresh sound and perspective.

The Athenia Trio has created an appealing and engaging album that welcomes listeners to dive into the varied literature for this colorful trio instrumentation. Wind players and enthusiasts will find much to love in this collection of recordings, not only as listeners, but also as performers seeking new works for winds. The two newly commissioned trios on the album are particularly welcome additions to the repertoire and will hopefully encourage more musicians to continue to seek out and create new chamber music for mixed winds.