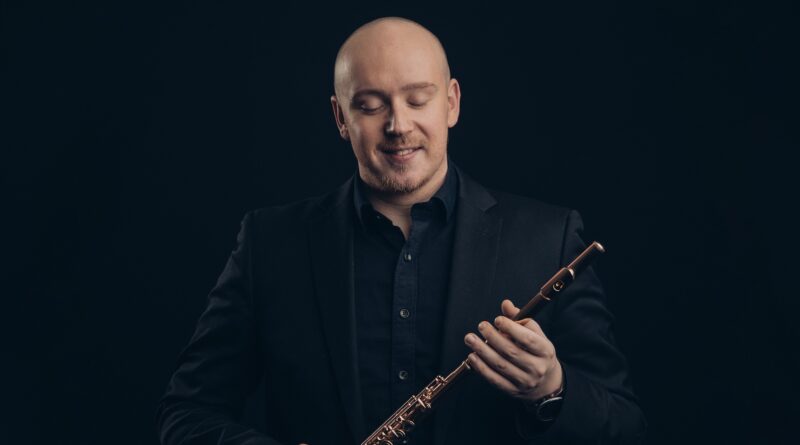 Eirik Hoel Sandvik is a flautist from Tromsø in northern Norway. Eirik has toured extensively in the Barents region of Norway and Russia and has a popular flute blog and Instagram flute account.

From the top of my head and in random order:

1) Performing George Crumb’s Vox Balaenae in Composer’s House in Saint Petersburg, Russia, where composers like Shostakovich had many of their chamber pieces premiered. All the history in those walls. I found it very hard to describe.

2) Russia tours with Tromsø International Film Festival (TIFF) and the silent film The Adventures of Prince Achmed (Lotte Reiniger, 1926). It was an absolutely beautiful experience. I formed a quintet with musicians from Russia, India and Lebanon and composed a wonderful soundtrack which we performed for full theaters in Apatite, Arkhangelsk, Severodvinsk, Petrozavodsk, St. Petersburg and Moscow.

3) Teaching a masterclass at L’École Normale de Musique de Paris. This was one of the greatest honours I can think of, to be asked to teach in Paris -- the axis mundi of the world of flute. And yeah, that happened. I just hope those students got something out of it.

4) Every single time I hear someone I taught from the very beginning doing something beautiful with a flute is both a highlight and my proudest moment.

5) My first time playing with a professional orchestra, Saint-Saëns’ Le Carnaval des Animaux with Tromsø Chamber Orchestra back in 2010. Volière is some debut, isn't it?

1) When I got the beautiful instrument which I play on today!

2) Realizing I wanted to move back to little Tromsø where I’m from. It is absolutely not the center of the world, but the center in MY world.

3) Turning 30 and stoping to care so much about what other people think about me!

My favourite moments are when someone has an "aha!" moment because of something I said. I also love how teaching keeps me accountable in my own praciticing.

To be honest, I think the times on stage are the only times I truly live ‘in the moment’. It can be amazing, and it can be terrifying. Some people do extreme sports. I get my kick from performing.

In June I’m playing the André Jolivet flute concerto with the Arctic Philharmonic. I am really looking forward to this. Over the summer I have some very cool plans with a good friend of mine from St. Petersburg who lives here in Norway. We’re making new music again and preparing projects, and that’s very exciting. Except from what I cannot say, I don't know much about the future right now. We live in strange times, so it’s hard to tell.

I want to stay as healthy as I can, to read more books, to attend French courses. I also want to learn how to knit a sweater. Professionally, I always aim for more chances to play concerts here in Tromsø: The Tromsø people should hear more flute rep!

The people I surround myself with. I’m very fortunate to know intelligent people who are also lovers of life, good food, good wine, good friendships and good laughs.

I grew up in a place where it wasn’t exactly socially accepted for a boy to play the flute. I went through Hell because of that, both inside and outside of the music scene. Let’s just say I was very determined. Many of my male flute playing friends have similar stories. It’s something I think needs to be talked more about!

The teachers with whom I had the immense privilege to study are as follows:

Torkil Bye (Norwegian Academy of Music, Oslo) – taught me to play with flair and sparks

Vidar Austvik (Univeristy of Stavanger, Norway) – honestly, Vidar taught me what is up and down on the flute. He also taught me so much about music. I am forever grateful and in debt.

Aldo Baerten (Koninklijk Conservatorium van Antwerpen, Belgium) – One of the most important things Aldo ever said to me was “Don’t compare yourself to recordings. Just make sure to give the audience a lovely experience”. I think about this every time I go on stage.

Peter Verhoyen (Koninklijk Conservatorium van Antwerpen, Belgium) – If I ever do something nice with my piccolo it’s because of Peter. What more can I say?

Lars Asbjørnsen (University of Tromsø, Norway) – When I came to Lars I was all loose ends. After many years developing on my own I had ended up in a confused place. Stuck. Lars is a true genius. He knows how to put out fires and find solutions to unsolvable problems.

These amazing musicians not only WERE my teachers. In some ways they still ARE my teachers, as I still have them with me in my daily practice.

Treat other flautists as your colleagues, not your competition; be the colleague you want in a colleague.