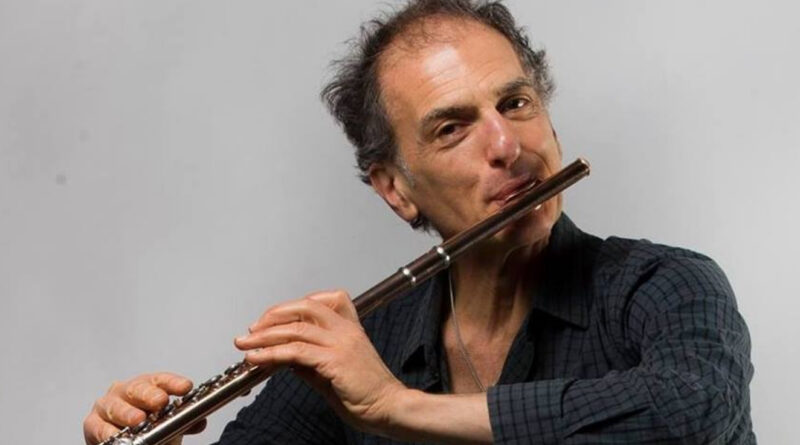 Claudio Barile, born in Buenos Aires, Claudio Barile has developed a long and successful career in South America, Europe, and the United States as a major exponent of the Argentinian artistic musical tradition. As Principal Flute and Soloist of the Buenos Aires Philharmonic since 1984, and a member of the Orchestra since 1974, Mr. Barile has been featured often performing the major solo flute repertoire at the famous Teatro Colon. Solo performances this season included the Flute Concertos by Jacques Ibert, Mozart, and CPE Bach. Mr. Barile has also held orchestral positions with the Buenos Aires Musical Ensemble, Mexico’s Orchestra of the Americas, and The National Symphony of Argentina. While performing with the Berlin Philharmonic, he participated in the recording of the Brahms Serenata 1, Op. 11, in D Major, conducted by Claudio Abbado. His international solo performances as a member of Camerata Bariloche have included concerts in Europe and The United States of America, and an historic performance during the 100th anniversary celebration of New York's Carnegie Hall. Mr. Barile's recording of Alberto Ginastera's "Impressiones de la Puna" with Camerata Bariloche is on the Dorian Label.

Do you teach? What do you like about teaching?

Yes, I teach. For many years people have come to my house and taken their private class. Also for some years I have been at the ISATC (Instituto de Arte del Teatro Colón) and today these classes are given via Zoom.

What I like about teaching is that they indulge in daily exercises. In other words, to think simultaneously as they are playing a work or study in solving problems with the instrument in order to then always give way to music. That is, to teach to realize the “weak points”, identifying them and thus feeling the need to resort to this or that exercise in order to achieve the desired musical objective. That is to say, that in that case this will speak of making the student independent to know how to identify only which exercise will help him to solve this or that problem without the need for anyone to tell him.

In this way, when he plays an exercise (scales, long notes and arpeggios) he will have to think during the performance of the intended work and therefore he will not play such an exercise mechanically and without fantasy and in turn, when he plays the work he will have to know he has where to fill himself or where he will find the remedy to be able to do justice to the work in question.

In other words, the difficulties before the works and their level of execution will grow as a secondary effect. Not by mere repeat and mistake ...

The reward or the congratulatory “pat on the shoulder” will be given by the same music that will not be hampered by technical problems.

Harmony. To be at Peace with myself. To agree with what my body, with a conscience feeling as the best, healthiest and most convenient. That makes me happy and keeps me at peace. I would say it is a way of discarding (so to speak) what I don't like. What was left of all that discarding is what makes me happy at the present. It may not be like today or the same in the future, but that way of "gardening" in this present keeps me in shape.

As I follow that route, I only have what is positive and inspiring.

I struggle not to get intoxicated with constant information, possibilities, "convenient relationships", free time in peace wasted only in pursuit of money. I think that this way of walking, I do not even propose it. I'm used to it.

This is the only thing I do on a daily basis.

What has been your great challenge?

How to tell? It would be to transcend my own difficulties created by myself.

Sure ... maybe before this question I could answer you by memorizing the Penderecki concert? The Pastoral Concert of Joaquín Rodrigo? all Bach sonatas? Concert of Nielsen or Ibert ... Etc …?

Well no. None of it. That is fun and work for me at the same time, even though I had the image of "challenge" at the beginning. That is self-satisfaction, to solve technical problems by tackling the works.

That is to say, I will not speak only on a flute level but on a personal level, since all this will be reflected later in the phrasing or the music that one is capable of transmitting.

Passing self-censorship perhaps inflicted by families or by teachers or colleagues is, and for life, therefore, it is very interesting and a true Challenge. One can begin to feel the opposite and yet be in harmony with oneself without becoming alienated and being with those beings that surround him without having to be going into tirades, in discomfort for having opinions and acting differently.

Accomplishing all of this was a challenge for me.

Making routine changes that at one stage were necessary and today are not is another challenge (they can be your way of life, your way of eating, your work-outs, your readings, etc.).

You change like this, substantially and completely. It is not necessary to change your environment but in such changes we will depend on the endogenous and non-exogenous side of our Being.

Life shows us that what makes us live more fully is the possibility of detachment. Mother Nature wants and needs to renew permanently! We notice the example when inhaling and exhaling the air, that of vital importance of seconds ago we required it in a vital way, because we renew it with new and fresh air, nails, cells ... everything!

This I think is the secret to be in accordance with Nature and thus be ... "fresh" if that is the word.

I- Take into account the beauty of the sound and the articulations in all the forms, slow, cantabile and obviously in the Tempos Vivaces.

That each flute player chooses to play a dirty color as an effect in a given passage, be it in a volitional character and not due to technical deficiency.

II - Always be attentive to how to do justice to the concept of the work, that is, not to falsify phrases or tempos because in the middle of a movement there is a “difficult passage”. Use this passage to evolve. Evaluate the situation and unify the concept of time to follow as well as how to solve the technical possibilities.

This concept has served me for years in order to demand more of myself ... It could be that this has been my Master! Comparing yourself with good singers or instrumentalists because they do not have the same difficulty as us in the same place and it is there that they can inspire us to achieve better attacks and colors. In other words, having our heads open to all of this, thus, we have more awareness of our evolution, the study is more fun and it is more enriching to play. Obviously this will also benefit the depth of interpretation.

III- Leave a place of comfort.

Reading has accompanied me throughout my life and helps me a lot in the daily stage of evolution. Reading is definitely a way to be happy.

Keep the idea of ​​“always keeping the learning capacity alert. Having an open mind and always being a "learner" of something new is beneficial to the brain. You stay thus alert. Even keep this stay for what we believe in and are experts in. That is, not self-regulate as an "expert in something" because that is when the action dies for perfection to go further.

For some twenty or more years there have been dizzying times where everything is within the reach of a “click” and therefore the permanently fragmented readings often undermined the tenacity of the character of the interested in searching (in the best of cases) topics of study. Today, also being that for more than a year we have been in seclusion and living in times of Pandemic, domestic activities languish, are dispersed in several at the same time (multi-tasking) and none are developed. This is not only for the benefit of our strength of character but also of training. Hence, many people are greatly impaired in personal care, body, training, growth.

Concepts or schools are not developed. They do not get to develop that it becomes another way another approach or another school. Nothing settles. They live as spectators and not as participants or creators of their own creation of whatever it may be, whatever it is called flute, journalism, art in general, or nutrition.

With hyper information, or "INFOxication" if you allow me the word, and being locked up, generates a lack of direction worse than misinformation because, it is full of half truths that do not edify us and thus undermine our enthusiasm. Concepts are not assimilated. They dissipate in many and are not triggered in none.

So my suggestion would be to try to BE INFORMED by dosing that information and feeling grateful for being safe and sound. Don't get intoxicated by informational bombardment. Be critical of the information and be consistent in order to do so if you tend to your own training.

Develop what we believe in and that is most effective for us. This new learned technique may have ups and downs in the testing stage, but this does not mean that immediately change course at the first frustration, since nothing is developed and, as I repeat, everything languishes.

To be able to transmit that Wisdom in my performances and to my students.