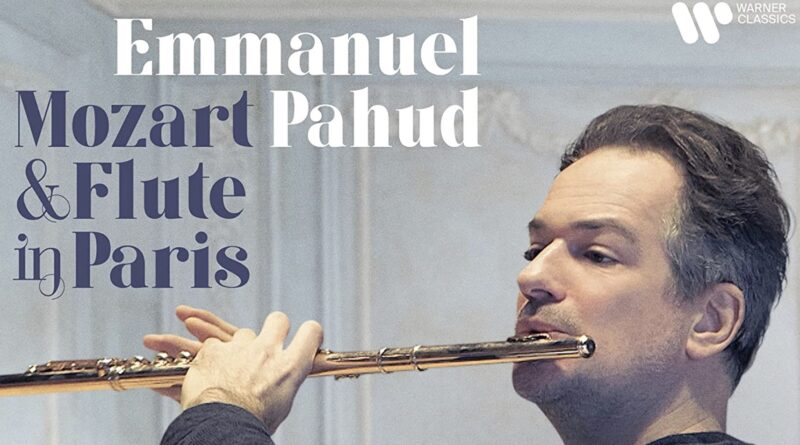 It is no secret that Emmanuel Pahud can play the flute. Pahud has remained a beloved performer at the top of the field for decades, and his most recent album, Mozart & Flute in Paris (Warner Classics, July 2021), is a strong affirmation for his staying power.

At first glance, Mozart & Flute in Paris presents an odd combination of repertoire. Dig a little deeper, however, and you will find that this double album of music for flute and orchestra showcases a roster of works all connected to Paris through some combination of their composers, contexts, or performance histories, spanning from the 1770s until today. The lineage of the modern flute is so inextricably tied to France, and Paris specifically, that no single (or even double!) album could speak to the entire history of that rich tradition. That said, this selection of works presents a beautifully curated collection that showcases not only Pahud’s excellent artistry, but also the brilliant work of a variety of musical collaborators.

The album is laid out roughly in reverse chronological order, beginning with a contemporary concerto, followed by a number of favorite French recital pieces from the late 19th to mid-20th centuries, and ending with two Mozartean concertantes. While there is much to love on this album, the highlights are the bookends: Philippe Hersant’s 2014 Dreamtime and Mozart’s 1778 Concerto in C Major for Flute and Harp.

Dreamtime is immediately captivating, striking that perfect balance between the familiar and the unfamiliar by blending references to – and reverence for – French music of a century ago and new approaches that stretch the listener’s ears in exciting directions. The ties to Ravel feel especially strong here; the very opening notes performed by the Orchestre de chambre de Paris are reminiscent of Ravel’s Daphnis et Chloe. Nods to Debussy’s La Mer and Stravinsky’s Paris-premiered ballets also make notable appearances. The music is not only beautifully crafted, but it also intelligently illustrates Hersant’s engagement with the history of the flute in French orchestral repertoire.

The interplay between soloist and ensemble throughout Dreamtime creates the sense that the flutist is acting as the listener’s guide on some kind of mystical journey. From the opening fanfare gestures, to the bombastic singing and playing toward the work’s end, to the ethereal textures and sultry lyricism in between, there is magic in this music. Pahud’s virtuosic performance, at times bold, lithe, and quixotic, heightens that sense of mysticism and adventure. This is a fantastic contribution to our contemporary flute concerto repertoire.

At the other end of the timeline, Pahud’s and Annaleen Lenaerts’s performance of Mozart’s Flute and Harp Concerto is the epitome of elegance. Written for a father-daughter flute and harp duo in the late 1770s during Mozart’s time in Paris, this particular duo concerto has maintained more freshness than its solo counterparts due in some part to its rarer programming, but perhaps in larger part to its own particular charms and sparkling instrumentation. The outer movements are performed with brilliance and crystalline clarity, creating the sense of being inside the world’s most beautiful music box. The second movement is a particular gem. Pahud and Lenaerts complement each other beautifully, interweaving their graceful, floating lines with such tenderness and finesse that at times this reviewer found herself literally holding her breath. There is certainly magic in this music, too.

Listeners will also enjoy the opportunity to explore Mozart’s lesser-known Sinfonia Concertante for Four Winds (which has its own interesting history worth exploring), as well as revisiting a number of French favorites written for flute and orchestra or arranged for that combination from their original flute and piano instrumentation. Of particular note is the orchestral transcription of Poulenc’s ever-popular sonata. The orchestration not only successfully transforms this recital piece into a convincing concerto-style work, but also, by capitalizing on the colors and textures that the orchestra provides, it brings out nuances in the music that invite listeners to engage with this familiar piece in a new way.

Mozart & Flute in Paris is an appealing combination of the old and the new, in terms of repertoire, orchestration, and approach. With this music, Pahud continues to demonstrate his virtuosity not only as a flutist, but also as a chameleon performer who is at home in many different time periods and styles. We all look forward to hearing whatever musical idea next sparks his imagination.