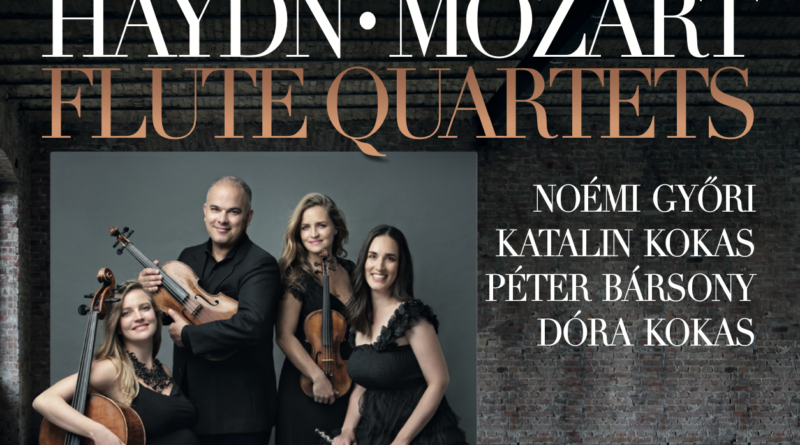 Noémi Győri’s most recent album, Haydn and Mozart: Flute Quartets, was released in May 2021 on the Hungaroton label. Győri, a Hungarian flutist whose past recordings have included her own arrangements of a variety of repertoire, collaborates here with string players Katalin Kokas, Péter Bársony, and Dóra Kokas to share two of Mozart’s beloved flute quartets and her arrangements of two of Haydn’s celebrated Opus 76 string quartets.

Listening to Noémi Győri’s latest album is like stepping into a welcome sunbeam on an otherwise gloomy day. Whereas many commercial recordings fail to capture that special something found in live performance, this particular album is brimming with the type of energy and spontaneity encountered live in the concert hall. Győri and collaborators Katalin Kokas, Péter Bársony, and Dóra Kokas bring a fantastic sense of imagination and playfulness to a set of beloved quartets by Haydn and Mozart, and their interpretations breathe new life into this historic repertoire.

Among the album’s offerings, flutists will be most familiar with Mozart’s flute quartet in D Major. The centuries-long rumor that Mozart disliked the flute is always dispelled, in this reviewer’s opinion, by the brilliance of this quartet, and Győri’s ensemble provides a sparkling and fresh interpretation. The first movement, taken at a spritely tempo, feels effortless and even effervescent. Győri takes exciting risks in her performance, creating huge dynamic shifts and employing rubato in surprising and delightful ways. Flutists know that the second movement of this quartet can be a minefield: with such sparse pizzicato accompaniment in the strings, the solo flute line feels extremely exposed. Győri’s take is refreshingly simple and tender. Her focus on line and phrasing, her delicate use of vibrato, and her exquisite control, especially at the tapered ends of notes, gives the music a suspended, otherworldly quality reminiscent of Gluck’s Dance of the Blessed Spirits (which was written not long before Mozart’s quartets). There is nothing overwrought here, just the music as it should be, and it provides a beautiful and intimate moment between the gregarious outer movements. The final movement is bursting with livewire energy, as if the players are egging each other on to go just a hair faster, add just a bit more sparkle. This performance of Mozart’s quartet feels authoritative but also spontaneous, just as the best live performances do. It is a guide for how we, as performers, have the ability to make even well-worn repertoire come alive through intentional interpretative choices.

Paired with two delightful Mozart flute quartets are Győri’s arrangements of two string quartets from Haydn’s famed Opus 76 collection, the last complete set of quartets that Haydn composed. Although purists may be surprised to hear a flutist playing the role of the first violin here, Haydn likely would not have been: while Haydn has long been regarded as the grandfather of the string quartet, developing styles and techniques through the nearly 70 he composed, his lifetime was also not far removed from the previous era’s approach to more flexible instrumentation in trio sonatas and other Baroque chamber music.

Even the staunchest string quartet purists will have to agree that these recordings sound fantastic. Győri does a wonderful job of playing chameleon, blending beautifully with her string colleagues and finding special moments to emerge from the texture to illuminate a solo line. An especially interesting choice here is her use of vibrato, which is far removed from the omnipresent vibrato that we have come to expect in much modern flute playing. Győri’s range and choice deployment of vibrato allow us to focus on her phrasing, her interpretation of the style, and her blend with the ensemble. Her playing presents a very effective argument for this kind of intentional choice and encourages us, as performers, to think about the range of tools we have to best share our own musical interpretations in performance.

Both Haydn quartets presented on this album are beautifully played and expertly arranged, full of character, expression, virtuosity, and palpable ensemble rapport. The most beautiful has to be the Largo cantabile e mesto from the D Major quartet (Op. 76, No. 5), an expansive movement full of pastoral lyricism and particularly sensitive playing from all members of the ensemble. The last movement of this quartet, a Presto, is a joyous romp for all players, and you can hear how much fun the quartet has riffing off each other in this rollicking finale.

There is much that stands out about this album, but most impressive is Győri’s service to the music itself. She prioritizes interpretation, expression, and character over the concept of playing with one consistent bel canto type of sound. Not that her sound is not beautiful, because it indeed is beautiful, highly polished, and appropriately elegant. But she is not afraid to embrace timbral variety and take risks in service of the character she wants to draw out of the music. Particularly notable are her intentional use of vibrato, her impressive dynamic contrast, and her range of articulation, which she flexibly employs to either blend with or emerge from the string textures. It is exciting to hear a flutist sound like a musician first, a musician who, yes, has mastered her instrument, but who moreover has an intentional, and most importantly, convincing interpretation of the work she is putting forth.