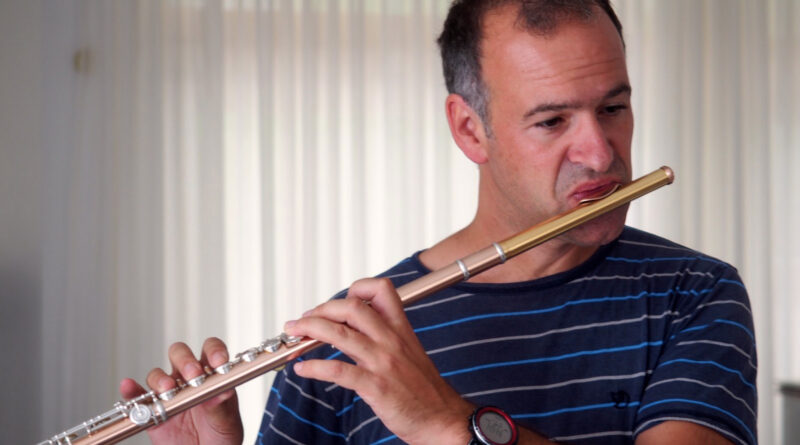 Kersten McCall was born in Freiburg, Germany, and received his first flute lesson at the age of nine. He has been a student of Felix Renggli, Renate Greiss and Aurèle Nicolet and won prizes at several international competitions such as ARD Munich, Prague Spring and Kobe (1st prize). Kersten has been principal flutist with the Radio Orchestra Saarbruecken between 1997 and 2006 and has been appointed principal flutist of the Royal Concertgebouw Orchestra Amsterdam in 2005.

How has the Pandemic affected your career?

Luckily not too much, if you think financially. The Concertgebouw Orchestra has kept us busy and continued paying our salary the whole time. Compared to what apparently happened to some orchestras in the US or the UK we were very lucky. But still, there’s more than just the money. Think of the daily routine, the practicing, the performance flow, it’s all gone now. But it’s not only a bad thing. Until now we have very much relied on our orchestra jobs and now we have been forced to find new ways of being creative, or better: to finally BE creative. Look, being a classical musician basically means playing music of dead, white, european men, covering a period of roughly 170 years of music history. Not that I’m not appreciating those masterpieces, of course I do, but it’s like dining in a three-star-restaurant every single day with only french quisine. There’s simply more out there, and most important: there’s music of now, of our time, our life, about us. Music that makes you wonder or doubt, leaves you breathless, clueless, disturbed, shocked, scared or delighted. Not just pampered. In literature, painting, film, acting, even in dance we expect all this. Why not in music? What is it that makes people walk into a museum of modern art more easily than into a concert with contemporary or unknown music? And why do even most musicians share this attitude?

I always had a rather radical opinion about being a musician: Not being involved at all into any creative process of a piece or a show means not being a creative person and therefore, according to my definition of the word, a musician yes, but not necessarily an ARTIST. You see, that’s what the pandemic did to me: questioning my own profession the way it is now. Are you sure you still want to continue this interview?

First of all I started writing music. I know, for being the son of a composer this seems rather obvious and it’s a shame I didn’t start much earlier. I have been writing lots of arrangements the last years for various instruments and genres but this is a different sport. It’s great fun and I recommend this to every musician. You simply have to ditch the idea that every piece has to be a masterpiece. It can also just be a snapshot, a moment of now, written for the instruments available, fully or partly improvised or maybe even for one specific performance only. Like streetfood compared to the french quisine. At the moment I‘m taking small steps, writing basically for flute or flute ensemble, trying to explore the possibilities of extended techniques such as multiphonics, whistletones or percussive sounds to be integrated without just sounding like „effects“ but as musical necessities.

I also started with traverso. This was actually the second thing I did during the first lockdown. The first thing was to start practicing „Unity Capsule“ by Brian Ferneyhough. But I gave up after a week. Life is too short and the weather was too nice …

Well, first of all I assume that the orchestra will continue, with or without audience. Besides that I have several chamber music and solo projects coming up, some of them with my own pieces, here in the Netherlands but also in France, Hungary, Taiwan, Germany, Canary Islands, Finland and the US. If things go as planned…

I really hope to deepen my writing skills and to become more „routined“ with that. I want this to become a stronger and more constant part of my life.

I‘m inspired by small things like numbers, words, gestures, unusual connections of things and any limitation a work is based on. The more limited the better. I therefore love Beethoven, Feldman, Paul Cezanne, Richard Serra, Franz Kafka. All masters in creating a maximum of beauty out of a minimum of ingredients. Poetry, which I love in general, might be a quintessence of this.

But to let inspiration be more than just admiration and to let it lead you into a creative process it needs two more things: phantasy and the FLOW. That is a condition one achives by focussing only on one specific action or thought. Most people have huge difficulties in ‚finding‘ it, especially these days with this constant distraction from chatting platforms and social media. I can find the flow in practicing, writing and activities like hiking, climbing or construction work. It’s not the activity itself but the condition of FLOW that is extremely inspiring and satisfying. Time is standing still, the outside world is gone, you are deeply connected with yourself and your brain is flooded with loads of new ideas and sheer happiness.

There have been many, and many more to come. After each mountain you climb there’s a next waiting (unless you prefer to hide in the valley).The secret is not to be intimidated by a project. My students often ask me how to practice „Cassandra’s Dream Song“ by Brian Ferneyhough and my answer is always: one line per day. Or maybe even less, who cares? No mountain can be climbed in one step. You have to do one step at a time without looking up, the speed doesn’t matter. That’s the flow!

Personally my greatest challenge ever was to do my trial period in the Concertgebouw Orchestra while still playing in the Radio Orchestra of Saarbruecken in Germany while still building a house there while having two small children. Too many mountains at once, but thanks to Christine, my wife, everything turned out well.

Talking about teamwork: I am extremely proud of having grown a great team with my pianist Kamelia Miladinova during the last years. We worked hard especially on our rubato skills and the blind trust this requires, finding new repertoire and giving the known one a fresh reading. Nothing seems impossible now. Further I’m immensely proud of having learned „Loops III“ by Philippe Hurel this summer together with my former student Teresa Costa. It’s a beast of a piece, highly virtuous with lots of quartertones that ask for complete different fingerings. We have just now performed it live for the first time and I can tell you: it’s pure flow!

The fact that I’m constantly trying to figure out new music or programs that attract and challenge the audience. It’s refreshing and rewarding for both sides. It feels a bit like the awakening of Neo in The Matrix. I also hope to inspire many especially young musicians to do the same and to convince audiences, halls, producers, agents to not be scared and to trust the choice and the work of the musicians, who are the artists!

I picked up traverso again, hoping to improve my skills in unpleasant keys and those awkward fork fingerings that come with them.

Planning, writing and arranging for some upcoming recitals. In a few days I will receive an alto flute Eva Kingma is building for me. It has some nice features like open holes, F# foot and F#up (to close the gap in the quartertone scale). Can’t wait to play and to write for this instrument. Lots of possibilities to be discovered.

Not warming up before bouldering.

Reducing the impact of humans on nature and to repair the damage we caused so far.

The things I know now I can share with my son who is 19. But for myself? Sorry, can’t think of any. But isn’t that what it’s about? That you’re constantly learning? Ask me in 25 years about the things I wish I knew when I was 48. It’s going to be just the same.

Something I had to learn during the last years is how to deal with personal loss. Nothing and nobody can prepare you for this. I was lucky not to know about it when I was 19.