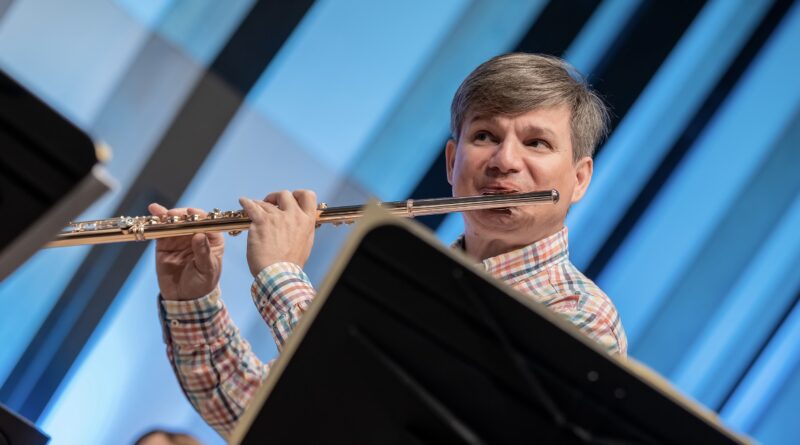 Szabolcs Szilágyi was born to a family of artists. His father was an actor and his mother is a cultural manager, who works as fine art gallery director. He graduated from the Liszt Ferenc Academy in Budapest, where he was a student of the late Tihamér Elek. He then went to London to continue postgraduate studies at the Royal College of Music with Susan Milan. Meanwhile, invited by the maestro, he attended Sir James Galway’s international seminar in Weggis, Switzerland, on several occasions. Szabolcs Szilágyi has been a member of Concerto Budapest – formerly Hungarian Symphony Orchestra – since 1995. He premiered in Hungary the works of such composers as Lowell Liebermann, Aaron Jay Kernis, Mike Mower and David Heath. Since 2018 he has recorded exclusively for Hungarian record label Hunnia Records. Mr. Szilágyi is the founder and artistic director of the Budapest Flute Academy. Since 2021 he is teaching flute at the Szeged University Béla Bartók Faculty of Arts.

How has the pandemic affected your career?

A lot of ups and downs. My orchestra stopped for some time but then we started streaming concerts, which I have mixed feelings about (live is better). I also had to cancel the Budapest Flute Academy, which was very disappointing. But strangely in some ways it was good timing because I became a Haynes Artist just before the pandemic and with that opportunity I changed instruments. https://www.wmshaynes.com/szabolcs-szilgyi  I got a new Haynes 19k gold flute!  The Pandemic gave me time with the instrument, to play it and learn about it, and so it was a difficult situation, but also a new beginning for me.

With the orchestra (Concerto Budapest, formerly the Hungarian Symphony Orchestra)

we started to record all the Beethoven symphonies. www.concertobudapest.hu   With no audience’s we began to notice more details in the music and to delve deeper.  I was still teaching, but online of course so I had to work with the students in a new way.  My students practiced more, they had less to do, but I wasn’t able to hear them as well as in person.

The 2022 Budapest Flute Academy, a festival of concerts with master classes.  I’m recording my next album, the last piece will be recorded in May.  The orchestra has a UK tour coming up, and in September I will be attending the Slovenian Flute Festival. I’m also writing a book, an essay collection on 2 centuries of Hungarian Flutists, which will be out in 2022.

Tell us a little about why you are writing the book.

The Russians invaded in 1956 and the Iron Curtain cut Europe in half. I was born in 1972, in the Communist era. We had no French music, no etudes, no wind culture, no French tradition. We were missing a lot of elements in our studies.  I’ve asked flutists and flute makers to write essays about Hungarian flute life including this period,  and I am the editor of the book.

Professionally- to concentrate on my playing and practice as much as I can so I can help my students. And to learn pieces I’ve had no time for!

Personally- I want to bring people together with music from all parts of the world. I’d like to spend more time with my family and my wife, being a father. My son is 20 years old and in his first year at University, I’m still holding his hand but we are in a new chapter.

Discovering new things about flute and flute playing, changes in the music world and in the orchestra. Playing Hungarian music and digging into the roots of how to play these pieces, figuring out why a composer wrote a particular piece, understanding the history of the music, which I feel is my responsibility as a Hungarian musician.

Also, being with my family, keeping the family together is most inspiring to me.

Professionally- Making a career abroad. The Iron Curtain was gone but financial resources weren’t available, attending the Galway Festival changed that. It’s a great community of flutists who really care about what each of us is doing.

The political situation, very frightening. We are gifted as musicians to bring music to the people and we can help.

The Budapest Flute Academy, the new album, the orchestra and the new book!!

In my flute class, the students are not playing scales. They just want to play faster and louder, the details are missing. They actually have to understand the world, which is going much faster than ever before, so the scales help them to break their rushing habits!

To end the war in Ukraine.

When I was 19 Socialism had just collapsed and if I had known what would happen in the next 30 years since the collapse I would have left for western Europe.

Tell us about the Budapest Flute Academy.

After attending the Galway Festival in 2012, my whole life changed! I wanted to bring world class flutists to Hungary so I created the Academy. I wanted Hungarian flutists to hear these flutists live, not only on You Tube, so I created a series of events, especially since it’s very expensive for the students to travel abroad.  We’ve just had the fifth Academy!! Attending this year are Kersten McCall, Juergen Franz with pianist Kamelia Miladinova and guest flutist, Teresa Costa. For the first time the Academy is having a concert of the best flute students of Hungarian vocational schools and universities. We love the idea of the young students performing on the same stage as the masters! Each guest flutist performs on a recital and will also teach masterclasses over the 2 days of Academy.