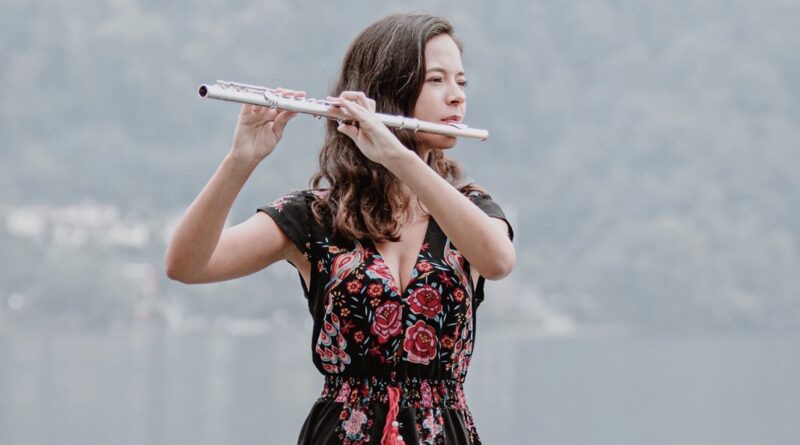 Classically-trained flutist for 16 years with a Bachelor’s Degree from Nice Conservatory, France and a Master’s Degree from Lugano Conservatory, Switzerland. She was awarded 3 times in International Flute Competitions held in Europe and currently, she continues her music studies as a full-tuition scholar at Berklee College of Music with a double-major in; “Contemporary Writing & Production” and “Jazz Performance” and works in the same time as the; "Session Flutist" of Film Scoring Recording Orchestra of Berklee College of Music.

During my live performances, I sense that music has the power to take control of the spiritual world and the mood of a person. As musicians, we are able to make people travel through lands of emotions and it is an honor for me to have that magical power!

What are your 5 career highlights?

I made my very first arrangement, in the second year of my music studies, when I was 12. The song was Michael Jackson’s Smooth Criminal arranged for 8 flutes, and it was performed in 3 different cities in Turkey.

In 2020, I was accepted to “Berklee College of Music” in Boston, USA with a full-tuition scholarship (Professional Diploma in a double-major of;  'Jazz Performance' and 'Contemporary Writing and Production') where I currently study.

I received 3 prizes in International Flute and Chamber Music Competitions in Europe.

I was covered in 6 different media channels.

In 2022, I was hired as a 'Session Flutist' for the 'Film Scoring Recording Orchestra' by the Berklee College of Music.

My first essential moment occurred when I begged my family for piano lessons before I started secondary school. Later on, I was accepted to the Ankara State Conservatory as a flutist, I loved it very much as well and never gave up on it!

The second vital moment happened through my studies abroad in Europe, where Western Classical Music was born. Throughout my studies, I found success in Europe’s many classical music competitions. Although I do not fully like the idea of the music contests, they have greatly helped me to refine my level of playing and expand my vision of what is going on in the world.

The third decisive moment happened from my decision to start going to the Jam Sessions in Nice, France. I discovered there are tons of other styles of music one can play and be passionate about! Later on, I started taking Jazz Improvisation classes at Lugano Conservatory in Switzerland. Finally, I discovered and auditioned for Berklee College of Music from where my life was completely changed.

Extremely delicious things might be coming up very very soon and I am not going to ruin the surprise, no!

From now until September, I will have 1 more month of education, final exams, and performances at Berklee. Then 4 months of a summer break where I plan to spend time between Boston, Europe and Turkey. It would be completely filled with music, an internship in a music company in Boston, composing, jamming with musicians and creating lots of fun new video shoots for my page!

The development of a person, personal growth, and spiritual maturity are the things that I put a lot of effort on. From my eyes, this comes first, before everything, because it affects all a person’s relationships, with herself, her loved ones and colleagues, and with music. With anything in this universe! Professionally, I wish to compose my original music, perform it with a team of musicians who are as passionate as I am, and to touch the hearts of audiences everywhere in this world!

On top of the stress, disappointment and difficulties that every person experiences at a certain dose in daily life. The greatest challenge of my life has been being far away from my family and loved ones who are in Turkey and rarely being able to see them. This becomes the only reason to come so close to quitting everything and going back home!

Who were your music mentors and what did you learn from them?

In the field of Classical Music, there are three names that have made the biggest impact on my fundamentals of flute technique; Cem Onerturk in Turkey, Sibel Pensel in France and Felix Rengli in Switzerland.

In the field of Jazz, I learned the technique of Jazz Flute improvisation from; Sarpay Ozcagatay, and the artists who enlightened my vision and helped me set my soul free; Kenny Werner and Tiger Okoshi at Berklee, in Boston, USA.

Can you give us quirky, secret, fun hobbies or passions?

Let me share with you my biggest passion after making music and dancing. It's; ULTIMATE FRISBEE! If you have never heard of it before, I invite you to watch a match urgently at this link!

I have been playing this mixed-gender, competitive but most fun team sport for 8 years now. First started playing it in the team of Bilkent University; "Goats' in Ankara, Turkey. Then transferred to a club team named "Frostbite Ultimate", with whom we got second place in the Championship of Turkey twice! Later on, by my music studies having me move to France, I continued playing in the "Ultimate Frisbee Team of Antibes" and participated in several tournaments in France. During my Master's Studies in Switzerland, I found the closest team in Como, Italy, whose name was "Frasba dal Lac", a women's team with whom we got third place in the Milano Ultimate Frisbee Championship! Finally, while doing my Professional Diploma At Berklee College of Music this year; I discovered and got into the Ultimate Frisbee Team of Berklee and we participated in a tournament at  M.I.T. in Boston, USA last September!

1) Practicing slowly is the fastest way to learn any piece!

2) Nothing will ever change until you stop and take a conscious decision to fix the problems!

3) Do not ever forget these two things; by making music you are working magic on people and lastly, you play the greatest instrument in the entire world!