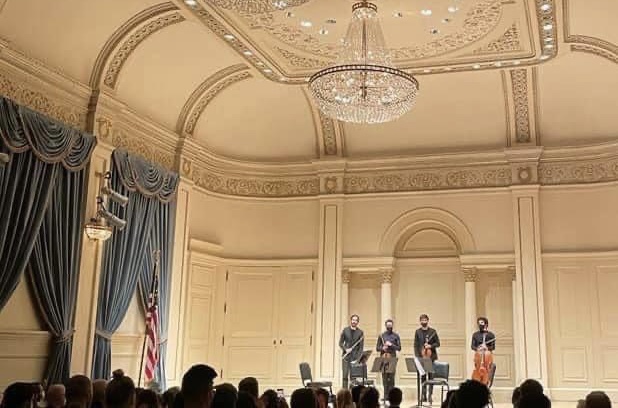 Francisco Barbosa is the Principal Flutist of the Madrid Festival Orchestra, the main guest Principal Flutist at Orchestra XXI in Portugal, and a member of the Klaue Woodwind Quintet. Born in Braga, Portugal, in 1990, he began his musical studies with José Matos after entering the Conservatory of his hometown in 2000. In 2005, he continued his studies at the Academy of Music in Guimarães.

Barbosa graduated from the Escuela Superior de Música Reina Sofia in Madrid with distinction, where he studied with Jacques Zoon and Salvador Martínez. Since receiving his diploma, Francisco frequently performs and teaches at international festivals across Europe, the United States, and South America. Barbosa is the author of the series of flute exercise books, A New Approach to the Art of Flute Playing.

Flutist Francisco Barbosa performed his Carnegie Hall debut on May 17, 2022, at Weill Recital Hall, featuring a highly virtuosic program including the famous W.A. Mozart Quartets, an arrangement of Dvořák's "American Quartet," and the World Premiere for solo flute by Spanish composer Pablo Díaz. Barbosa was joined by colleagues André Gaio Pereira on violin, Francisco Lourenco on viola, and Gonçalo Lélis on cello.

The ensemble demonstrated exceptional warmth and vitality on stage in their flute and strings program of featured works by Mozart and Dvorak. There was an intimacy at Weill Recital Hall at Carnegie Hall that connected the audience and chamber players. It was clear that everyone was thrilled to hear such exceptional live music and delighted in the extraordinary abilities the musicians brought to the stage from Portugal.

Their performances of the Mozart Flute Quartets in C and D major demonstrated a refined sensibility, with beautiful melodic passages from the flute, particularly in the famous Andante of the D Major Quartet. The Dvorak arrangement provided a fiery juxtaposition, with playful lyrical folk passages passed back and forth amongst each instrumentalist with passion and sensitivity for the unique chamber setting.

Barbosa's world premiere of "Nix" op. 14 for Solo Flute by Pablo Diaz demonstrated his impeccable technique and virtuosity. The piece was an exceptionally challenging work, utilizing the flute's ability to perform swift bird-like passages while weaving in and out of different registers and extended techniques. Barbosa handled the composition with a ferocious delight, showing a great connection to the work and his composer friend, Diaz.

The evening concluded with a traditional Portugese fado "é uma casa Portuguesa, com certeza." Barbosa shared that the translation of this title is difficult, but the closes would be "it is a Portuguese home." He also shared that the lyrics discuss traditional Portuguese items found in a Portuguese home like bread, red wine, decorations, etc. The artists shared that this song had significant meaning to conclude their Carnegie Hall debut, bringing the tradition and origins of their shared home country. It is a joyful style of fado, which is rare as most fado our more sorrowful, and ultimately an excellent way to celebrate the end of a successful and beautiful concert.