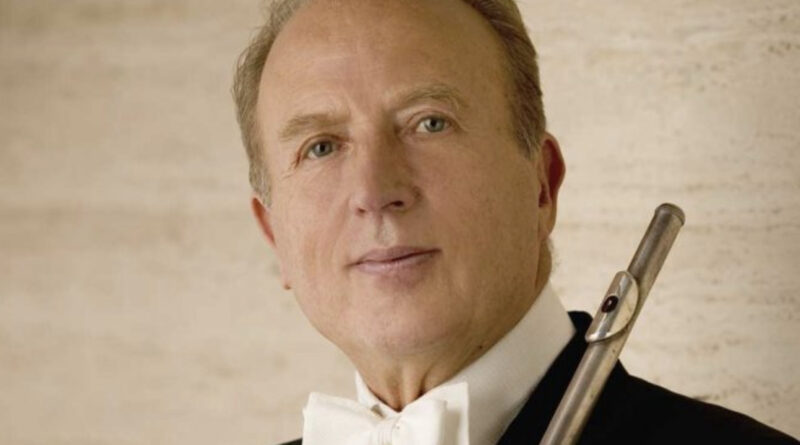 Facebook and Instagram exploded with tributes to this exemplary icon of the flute world who had touched so many.

Bennet started working at the age of 22 for the (now called) BBC Philharmonic, followed by principal flute positions playing with the English Chamber Orchestra, Academy of St. Martin-in-the-Fields. His legacy extends over 100 recordings as a soloist.

William Bennett raised the profile of the flute to that of an instrument capable of a wide range of tonal colours, dynamics, and expression, giving it the depth, dignity, and grandeur of the voice or a string instrument. He studied in London with Geoffrey Gilbert, and in France with Jean-Pierre Rampal and Marcel Moyse. The Masterclasses of Marcel Moyse in Switzerland in the late 70's provided extra stimulus and inspiration so that William Bennett's burgeoning career developed as an International soloist and recording artist. He had been Professor of Flute in the Freiburg Hochschule of Music in Germany, and he taught at the Royal Academy of Music in London and presented Masterclasses all over the world.

In January 1995, H.M. The Queen presented William Bennet with a Most Excellent Order of the British Empire (O.B.E.) for his distinguished Services to Music.

From Wibb's Facebook page:
Dear Friend,
We will be holding a memorial service to celebrate Wibb's life (Celebrating Wibb! ) at the National Musicians' Church - also known as the Holy Sepulchre London - on Holborn Viaduct, London EC1A 2DQ on 17 September 2022, at 3 p.m., followed by a reception until 6 p.m.
Please wear colourful clothes and - if you have one - please bring your flute!
At the end of the programme we will play Wibb's arrangement of "Mon coeur s'ouvre à ta voix” from Saint-Saëns' Samson et Dalila for two flutes or two voices. Wibb's arrangement is attached to this email; you can hear a similar version here - https://www.youtube.com/watch?v=hHiySQuS_ws, from minute 3.04. The first and second parts will be divided according to the side of the church on which you choose to sit.
We hope that you will come and join us and are very much looking forward to seeing you there.
If you are unable to attend in person, we can send a video streaming link.
With love,
Michie, Vanora, Sophie, Timothy, Luke, Joe, Naomi I was so sad to hear of the passing of Wibb. What a life he lived. Wibb inspired me in ways he may have never known, that reach far beyond music…

When I moved to London with all my youthful ambition, I got to know him when he popped into the flute shop, all flutes plus, where I worked. He lived life to the beat of his own drum and I never met anybody like him before. Just being in his company was liberating and inspiring - now something I recognise as the sign of a true master.

One day after spending time with him I silently said to myself “I wish I had the courage to be as fully myself as Wibb is in this world”. That thought grew over the years from a seed into something that sprouted into my spiritual path.

Over the years I would visit all his masterclasses in the RAM and learned so much from him. I often quote him and his ideas in my teaching to students who never had the privilege of meeting him.

He was a fantastic musician but there was much more to him than this. The light he shone was magnetic, his spirit itself was transformative to be in. He helped all of us to find our own light and shine that brightly.

Thank you Wibb for inspiring us all, we will miss you!!

RIP William Wibb Bennett. From Boswil in 1965 at Marcel Moyse's class to The Budapest Competition when we drew pictures together of the contestants as we judged....the sound of your wonderful playing.....a long friendship which I'll always treasure.....you taught me a lot about being a teacher and leader...Thank You.

Wibb, I am still trying to process your having left this earthly realm. But wherever you are, I’m certain that you’re making sure the harmonics are in tune. The angels will have a lot to learn from you! Since hearing the news, the memories just keep flooding back.
When I first heard a recording of yours (Handel Sonatas) and knew that I needed to study with you.

Arriving in Freiburg to study with you, at my first lesson, while critiquing my audition you said matter-of-factly that my harmonics were already in tune, but that my elephants were the wrong way round. I had no idea what you were talking about and had never experienced your teaching before… ah, the confusion… So much went right over my head during that time, but bit by bit I began to understand. Even after we left Freiburg, your teachings kept echoing through my head, as they do still to this day. Some I didn’t quite understand until years later. And even now I have many “aha” moments along with the wonderful memories.

In Freiburg, when you told me, “Don’t be a mouse!” and each time I saw you after the Freiburg studies were long over, you’d assess and say, “You’re doing much better, but you’re still a bit of a mouse.” And finally, at some point, “Ah, you’re doing very well now, no longer a mouse at all!”

When I won the audition and began the job at the Indianapolis Symphony, it got back to me that some flute player with a chip on his shoulder had commented to someone, “Oh, she only got that job because Raymond Leppard is the music director and he liked that she sounded like Wibb.” One of the best compliments I ever received, and I still try to live up to.

Years later, I decided to play for you again, and ended up at your Wildacres masterclass playing the first movement of the Franck Sonata with the wonderful Clifford Benson. More magical “aha” moments.

And then there were your Indianapolis visits. Six of them in all, the last one in January 2018. Playing concerts with Kelleen. The duos. The dinners. The flutes. The lunches. The headjoints. The Laphraoig. The chicken shit. (Yes I finally did learn how to place it!) The breakfasts with spirulina-laced granola and flute parts all over the table. Our chats out in the garden, and your insistence that George “leave the squirrels alone.”

The recital in Bloomington where somehow programs didn’t get printed, so you announced the pieces from the stage, and began with “The Frankfurter Sonata by C.P.E. Bach.” Our corner of the recital hall was having conniptions until we realized that there was still a hush over the rest of the room.

That one masterclass of yours where I was supposed to be the time-keeper, but you just kept on teaching, didn’t matter how much I gesticulated or watch-pointed. So, from a box seat, I decided to start a strip-tease, since nothing else seemed to get your attention…until you finally said it was time for lunch. And later you insisted you hadn’t noticed my efforts, although the entire audience was tittering…. OK, I had it coming.

The time you, Kate, and I were sitting around my dining room table, and you started to play with difference tones. Telling us to listen and we’d be able to hear not only the first difference tone, but also many more in the harmonics above. As you went through the list of which notes you heard, we listened in amazement. Maybe someday I’ll be able to hear them… in another realm, perhaps.

That time you decided to practice out of doors and settled on the spot by the oak tree in our front yard.

And then, the time I brought you to the airport and dropped you off—you were to go right to the ticket agent’s desk, and I was to park the car and then come inside. As I walked into the building, I heard the beautiful flute sounds echoing in the giant entryway. I followed my ears and quickly found you, playing for the delighted ticket agents, who had asked you what you had in your carry-on. Little did they know! As I came up to the desk, I pointed to you and told them, “He’s famous.” (Your proud response, “So is she.”)

Our visit to London, spending time with you and Michie, and Michie’s beautiful lunch. Then afternoon tea in the garden, and meeting the foxes.

Thank you, Wibb. So grateful for you, your joy, your music, your teaching, and all that surrounds it. And thank you, Michie, for being such a supportive, patient, and loving part of it all. We are grateful for this flute family you have created. We are all so very lucky to have known you, Wibb. We will do our best to carry it all onward.