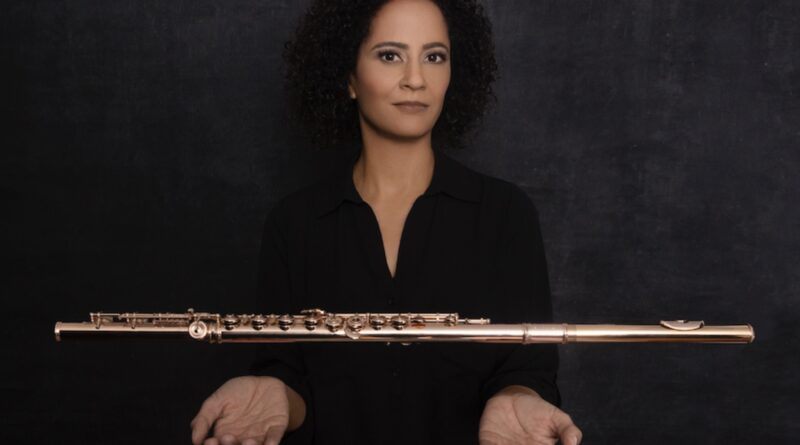 Jennifer Grim performed with such renowned ensembles as the Chamber Music Society of Lincoln Center, St. Luke's Chamber Ensemble, and Boston Chamber Music Society. She was the flutist of the award-winning Zéphyros Winds and the New York Chamber Soloists for over twenty years. Currently, Ms. Grim is an Associate Professor at the Frost School of Music at the University of Miami and previously served on the University of Nevada, Las Vegas faculty. Recently appointed Artistic Administrator of the Frost School at Festival Napa Valley, Jennifer is President of the Board of Directors of Chamber Music America and was the 2021 Program Chair for the National Flute Association Annual Convention.

Here is an older performance of Allison Loggins-Hull's Homeland:

I've always wanted to record an album but never had the opportunity because of a lack of funding. Finally, in 2019 after beginning my new position at the Frost School of Music, I received a grant that allowed me to fulfill this dream project.

While some apparent threads connect several of the works on the album, I chose these specific pieces for two reasons: 1) the style and nature of the compositions align with my musical preferences, and 2) they are all excellent works.

I met David Sanford in 2008 when I performed his chamber music on tour with the ensemble Speculum Musicae. I immediately felt a kinship with his music, which references jazz and avant-garde modernism. My wind quintet, Zéphyros Winds, commissioned a work from him in 2017, a successful piece we toured with for several years. When I finally saw the opportunity to record my album, I immediately contacted him with a proposal to write a composition. I was both thrilled and intimidated when I saw the score. It is both breathtakingly beautiful and raucously virtuosic!
With Tania Léon's piece, "Alma," I love the intimacy of the work and how unearthly beautiful it is. Alvin Singleton's solo piece, Argoru III, is a tour de force. At only four minutes in length, the piece grabs you from the first note and carries you through quick gestures, runs, shouts, and exhalations.

Of all of Valerie Coleman's works for flute, the one that stays with me the most is Wish Sonatine. It is a beautiful and haunting retelling of the Middle Passage, where Africans were sent to the New World to become enslaved. This work is full of raw emotion and power.

I also love Allison's piece, Homeland, which has become a staple in flute literature. That and Julia Wolfe's piece bring an essence of urban modernism to the album. These pieces bring me back to New York. I lived in New York City for seven years, right after graduating from school. These years were so influential to me as an artist.

Where did you get your Inspiration?

While I have always been interested in promoting works of Black composers, my role as an advocate began after serving on the Cultural Outreach Committee (now called the Diversity & Inclusion Committee) of the National Flute Association in 2014. Our committee's role was to program annual concerts of underrepresented composers at the National Flute Association Convention.

Another source of inspiration was being a part of the premiere of Julia Wolfe's ensemble piece, "Oxygen." We had initially planned it for the 2020 NFA convention in Dallas, but as the pandemic wore on, it was postponed and rescheduled until 2022. Meanwhile, several flutists who were a part of the initial commission recorded the work in New York and produced a video of the piece. I had a chance to work with Julia Wolfe and the incredible flutists who were a part of the project and realized this piece's potential beyond the ensemble. The work can exist as an ensemble piece, but it could also work in a solo, multitracked version along the lines of Steve Reich's Vermont Counterpoint. With Julia Wolfe's blessing, I recorded the piece's separate flute, piccolo, alto, and bass flute parts.

Julia Wolfe's piece was by far the most challenging piece to record. At over 15 minutes, it is not only the lengthiest work on the album but also took over three times as long to record as the other pieces. The piece has twelve parts, with six of the parts doubling on piccolo, one doubling on alto, and one doubling on bass flute. So, I had to record over 3 hours of music to cover all the parts. We layered each track on top of one another, so figuring out how to balance each line took a lot of care from my producer and recording engineer!