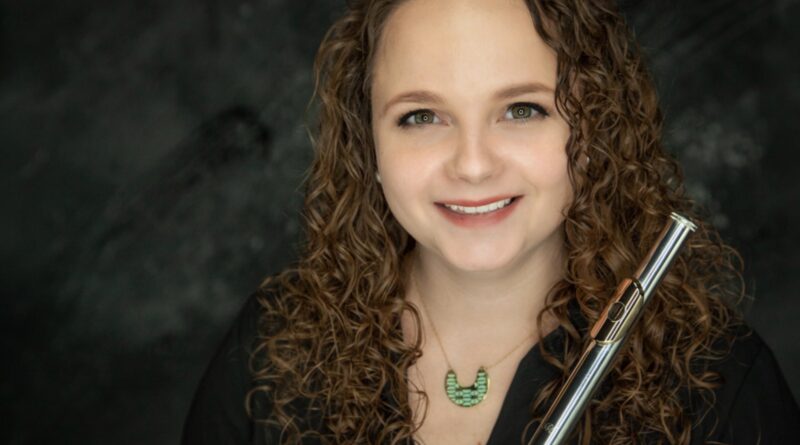 Rose Bishop is Instructor of Flute at St. Ambrose University, Coe College, Cornell College, and Kirkwood College. She serves as Principal Flute of the Southeast Iowa and Quincy Symphonies, Second Flute/Piccolo with the Ottumwa, and has performed with Orchestra Iowa, the Dubuque and Battle Creek Symphonies, among others.  Bishop is the Flute Faculty and Founder of the Eastern Iowa Flute Workshop, is a member of the National Flute Association’s Career and Artistic Development Committee, and co-author of A Flutist’s Guide to the Voxman Etudes.

Diversions Rose Bishop's debut album of solo flute repertoire that she either commissioned during the beginning of the Covid-19 pandemic or performed as part of her residency with the Southeast Iowa Symphony Orchestra in October 2021. This album features compositions by all female composers and includes works by Amber Beams, Nicole Chamberlain, Linda Robbins Coleman, and Lisa Neher. Diversions were released on September 2nd, 2022, through Odd Pop Records.

Diversions for one soloist, 3 flutes, and orchestra

Bandcamp Link to listen to tracks:

This project all began with the Southeast Iowa Symphony Orchestra commissioning Iowa composer Linda Robbins Coleman to write a new flute concerto, Diversions for one soloist and alto flute, flute and piccolo and orchestra, for me as the 2020 Artist in Residence. I was extremely honored and thrilled to be a part of this project, and with getting to work closely with Linda as she wrote the piece was incredible. We were scheduled to give the world premiere in April of 2020, but then the world shut down. (I got the final copy of the concerto the day our season was canceled).

After some time of grieving, I decided to focus more on solo repertoire as I didn’t expect to perform in a large group for some time. I commissioned a couple of the works by composer Lisa Neher that are featured on the album, and at the end of 2020, Lisa and I recorded an EP of these works with a premiere performance titled Of Winds and Waves.

As 2021 progressed and the vaccines began rolling out, we hesitantly programmed Coleman’s Concerto on the October concert and began planning my two-week residency. I was scheduled to perform at 30 schools throughout southeast Iowa and give three solo recitals. I had decided early on that I wanted to perform music by living female composers, as that was the theme of the 2019-20 season to celebrate the 100th anniversary of women’s right to vote. I also decided to feature music that used my own instruments: piccolo, flute, alto flute, bass flute, and contrabass flute.

Where did you get your inspiration?

The residency was a huge success, and I premiered Linda’s concerto in 3 cities in 24 hours: Ottumwa, Burlington, and Mount Pleasant, Iowa. Linda was thrilled and encouraged me to record my residency pieces for my solo debut album, which took about six months to finish. I titled my album Diversions after the name of Linda’s concerto because none of this would have happened without her love and support. I am immensely grateful to everyone who helped turn this dream into a reality and especially grateful to the composers who worked closely with me to record their works.

Once I began the recording process, I began reaching out to different labels to learn more about the process, costs, etc. I decided to release my album through Odd Pop Records, a collective of composers and performers who digitally distribute and promote new music and composer-driven recordings. I recorded all of the tracks with classical music recording engineer Peter Nothnagle. The artwork used as my album cover was a wedding gift by surrealistic artist Drew Mounce.

Album available at www.rosebishopflute.com, and on Bandcamp, Spotify, and Apple Music.