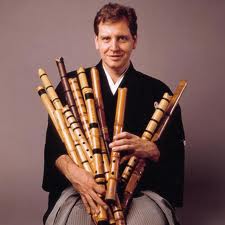 Fluterscooter: You had mentioned how the shakuhachi originated as a Zen Buddhist
practice.
James: Yes, traditional shakuhachi practice was created by Buddhist monks, and the
earliest written reference was mid 13th century. The monks used shakuhachi as an
extension of meditating (breathing meditation, in and out, and listening to sound to
achieve enlightment). Meditation came first, then they decided to use it through the
instrument. Some still practice as form of Buddhist practice (no performance and no
teaching).

Fluterscooter: Articulation: how is it different than in western flute?
James: In shakuhachi playing, articulation is not done with tonguing, but done with the
fingers. The reason we don’t tongue is because of the “breath practice.” As we’re
pllaying sound when we exhale, we don’t wanna interrupt the sound. So that’s the way
finger articulations, known as “Atari (a finger hit),” were developed. It also creates the
poppy, distinguishable, shakuhachi, sound, In Zen music, it’s very particular about what
fingers you use to articulate.

Fluterscooter: When was the first shakuahachi music written down?
James: We don’t really know! In the 19th century, it began to be written down around
when the Meiji era began. Playing shakuhachi was actually outlawed for awhile. By the
end of the Edo period (1865-8), shakuhachi playing was considered old-fashioned, and
the government wanted music to be written differently. They even wanted scales to be
more western sounding. Chamber music from the Meiji period had quite a different
sound. Players could only play in secret and not on the street like they had been before.,
and it was only relegated to samurai status.

Fluterscooter: So how did it get unbanned?
James: Good question! The Fuke sect guild of monks would only teach the shakuhachi
craft if you were samurai class and joined the priesthood. However, during the course of
the Edo period, the merchant class became quite wealthy and wanted to play music like
the wealthy class had been. Koto and shamisen became popular then, and merchants
wanted to play with them. Monks secretly taught merchants shakuhachi. The merchant
class wanted to learn popular koto music, not zen music., so shakuhachi became a
musical instrument rather than Buddhist practice. It was then reclassified by the
government to as a musical instrument, so music was now allowed to be played again.

Fluterscooter: There are 2 different types of schools of shakuhachi schools. What’s
the difference?
James: The Kinko school plays the older Zen music as well as 3 piece chamber music
(known as Sankyoku). The Tozan school is based on more contemporary music and
commissioned pieces. It is also written for larger shakuhachi ensembles like flute choirs,
and the notation is significantly different. About half the shakuhachi players play Kinko,
the other half Tozan. I play from the Kinko school.

Fluterscooter: How does chamber music (Sankyoku) work? What chamber music
has been written for shakuhachi?
James: Chamber music was elite music for the elite, much like early classical music.
The instrumentation is shakuhachi, koto, and shamisen. It is focused around the strings,
the koto and shamisen (an instrument of the geisha and popular in kabuki theater).
Singers would write songs with shamisen accompaniment. Then they added koto,
imitating eachother’s melody using specific characteristics of the instrument. Shakuhachi
came in and imitated the same melody, but in shakuhachi style. It’s a layered approach to
the same melody varied by characteristics of the same instrument (also known as
heterophony). All music was learned by ear, as most string players were blind.
Hundreds of pieces of this repertoire are now written down. There is never any harmony,
much like most Asian music. It is all the same line but with variations based on the
instrument.

Fluterscooter: Lastly, how is the shakuhachi used in 20th century music?
James: The shakuhachi is actually being written for a lot these days as a solo
instrument or in ensembles with either Japanese or western instruments. Most
composers, me being one, use all the ranges of the instrument and add their own
techniques, much like contemporary flute writing!