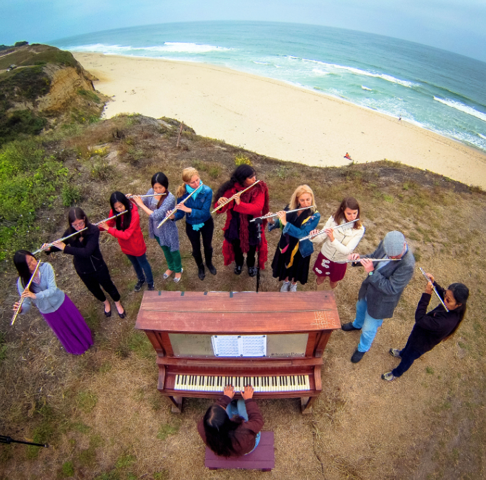 I was born on the ocean. I live on the ocean. I work on the ocean. It’s no surprise that The Flutes by the Sea Masterclass would take place near the ocean as well. The ocean provides an inspiring backdrop for music making. Creative people need the soothing, refreshing and rejuvenating aspects of the sea.

Attending the event who will be showcasing their merchandise as well as performing and leading workshops. They include the following (in alphabetical order):

Janelle Barrera, President of the LA Flute Guild, will be conducting the Flutes by the Sea Flute Choir which will rehearse everyday at noon. Janelle will also be performing on the Thursday night concert, June 12.

Fluterscooter, Co-Founder/Editor of The Flute View Magazine, will be showcasing her elegant Fluterscooter Flute Bags. She will be performing on Wednesday and Thursday nights during The Flute View Trio Debut Concert. Fluterscooter will also be teaching and giving the lecture she presented at The Juilliard School, Building Your Brand Business of Music Lecture.

Viviana Guzman, Founder of the San Francisco Flute Society, Co-Founder/Editor of The Flute View Magazine, will perform as a soloist with the Magic Flutes Orchestra at the opening concert on Sunday night at 7pm as well as for The Flute View Trio Debut Concert on Wednesday and Thursday nights June 11 and 12 at 7pm.

Tracy Harris, Founder of the Wynfall Flute Choir and Wynfall Music Studios will perform on our final Gala Concert on Thursday, June 12.

Other guest performers include Audrey Boyle, Anita Chandavarkar, Ai Goldsmith,
and Abigail Sten who will perform on Wednesday June 11 at 7pm.

Among our Distinguished Flute Choir Directors, we will be hearing each of the following
SF Bay Area Flute Choirs at the commencement of every 7pm concert:

Every morning I will conduct a Meditation for Performers Workshop where I will cover basic techniques for overcoming performance anxiety. After this, we will begin with the Flutes by the Sea Flute Choir rehearsal with Janelle Barrera followed by the Masterclass from 2pm to 3pm where I will listen to classical flute repertoire and also conduct the following Workshops: “Just Intonation”, Intro to Improvisation for Performers, Intro to Beatbox Flute.  From 3pm to 4pm Barbara Siesel and Fluterscooter will guide the students with their unique teaching and guidance. The 4pm to 5pm hour each day will feature a different workshop / lecture with various topics from Acting for Musicians with Keith Torgan, Inprovising for Classical Musicians with Jane Lenoir, How to Start Your YouTube Channel with Joanne Tse.

Every night there will be a Concert 7pm which is offered for FREE to San Francisco
Flute Society Members.

We look forward to seeing you at this years Flutes by the Sea Masterclass.