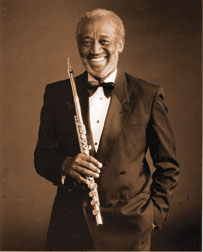 I was saddened to hear about the recent passing of my colleague and friend Harold Jones. (1934-2015)   Harold came to NYC from Chicago on a scholarship to The Juilliard School in 1955 remaining in NY and becoming an active member of the music community as a performer, teacher, conductor and artistic director. He taught at the Manhattan School of Music, Westchester Conservatory, Brooklyn College (among others) and made his Town Hall debut in 1966, going on to solo with many orchestras including the American Symphony, the Brooklyn Philharmonia and the Symphony of the New World. He was also active in the NY Flute Club where he was president from 1976-1979.

Harold was always an inclusive, open artist with much kindness for young players. I was once a young player that he was kind to!  In 1974 I was a member of the NY All-City High School Orchestra.  All-City, founded in 1936, was a HS band and orchestra that was open to public school students from all five boroughs of the city. It was competitive, and in 1974 I was a member of the orchestra, which played two concerts, one at Carnegie Hall and one at Avery Fisher Hall. The orchestra that year had the honor of combining with the NY Philharmonic for several concerts; it was a great opportunity for this girl from Queens (me). We played several pieces on our concert and two of them were BIG flute pieces!! Debussy Prélude à l'Après-midi d'un faune and Mussorgsky’s, Night on Bald Mountain. Each section of the orchestra was coached by members of the NY Phil, or by NY Phil subs. Harold Jones (who was subbing in the NY Phil) was our section coach and he worked with us to help us learn and perform these repertoire pieces. It was great to work with him- he was an inspirational teacher and coach and very supportive, back when this music was brand new to us! I got to know him as a professional many years later when I subbed for him at Manhattan School of Music pre-college- he always tried to be helpful and supportive to other players.

Harold was a founding member of the Symphony of the New World. (www.en.wikipedia.org/wiki/symphonyofthenewworld) (the following is quoted from Wikipedia)

Symphony of the New World was the first racially integrated orchestra in the United States. Here’s the mission statement of the orchestra founded in 1965 just after the Civil Rights Act of 1964 was passed:

Although the orchestra disbanded in 1978 it played many concerts throughout the city with distinguished conductors and soloists, and created many opportunities for African American musicians. Here’s a quote from Harold about the experience for him:

"It built hope where there was very little". "It showed that, as black people, we had paid our dues and we could do it as well as anyone else. It was such a moment in life that I’m overwhelmed with it. I just wish it could have lasted, the inspiration that this could be done [remains] in all of us.”

20 years ago Harold founded the Antara Ensemble, (www.antaraensemble.com/aboutthefounder.html), which he conducted, performed and programmed. The group was formed to bring quality classical music at affordable prices to the culturally diverse neighborhoods of New York.  The group performs repertoire spanning centuries and includes works by American, African-American, European and Third World composers.

You can hear Harold Jones on several solo albums.  He recorded the Vivaldi flute concerti for the Library of Recorded Masterpieces and has four solo albums, including three on Antara Records: "From Bach to Bazzini", "Afternoon Fantasies", "Let Us Break Bread Together" and "This Little Light of Mine."

We will all miss Harold Jones and send our condolences to his family. Thank you Harold for your beautiful playing, for your openness and generosity, and your commitment to creating equality and beauty.