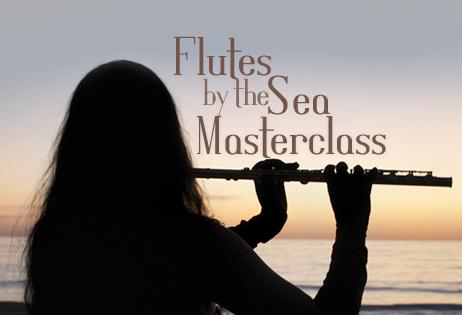 Flutes by the Sea 2016 California & Bali

The ocean provides a wonderfully inspiring and relaxing backdrop for any creative spirit; we arose from the sea and it resonates within us still. I have always been attracted to the sea, and feel I am a sea creature who cannot be separated from my home for too long; it calls to me. This is why I created Flutes by the Sea Masterclasses in my home town of Half Moon Bay, CA. I wanted to attract fellow flute lovers and show them the power the energizing waves can exert over their creativity. Through the years, Flutes by the Sea Masterclass star teachers have included Carol Wincenc (Juilliard School), Jill Felber (UC Santa Barbara), Andrea “Fluterscooter" Fisher, Alice K. Dade (University of Missouri) and Barbara Siesel.

Balinese Beauty
This year was expanded to include a seminar in Bali, Indonesia with Jane Rutter, Fluterscooter and myself rendezvousing with our students at that tranquil island in the west of the Pacific. Flutes by the Sea Bali started off with a session of swimming with the dolphins and coral reef snorkeling before the first note was played in flute class. Every day there was a different activity, from bathing at the breathtaking Munduk Waterfall; visiting the Batur, Bratan and Agung Volcanos; feeding the monkeys at the top of the mountain; to feeding the tropical fish at the bottom of the ocean; petting snakes, iguanas, and rabbits; and visiting the tropical deer who live on Menjangan “Deer” Island. We also visiting Buddhist and Hindu Temples and saw numerous timeless and serene rice paddies. In the afternoon flute classes we covered topics from vibrato, tuning, building technique to phrasing, tapering and memorization. After our week long stay in our oceanfront hotel in Lovina, we moved to the artistic and now famous (due to the movie Eat, Pray, Love) town of Ubud. Here, Australian flute sensation Jane Rutter joined us and offered daily afternoon masterclasses focusing on the special phrasing and warm-up techniques that she learned from her French Conservatoire masters, Jean-Pierre Rampal and Alain Marion. The class finished with a special performance that we all took part in at the Jodie O’Shea Orphanage in Denpasar. The children are appreciative of music and quite lively, with the inner beauty that seems to be imbued in the Balinese and which is the real reason Bali is such a paradise on earth.

Half Moon Bay Harmony--Flutes By The Sea July, 2016
Last year, our FBTS whale watching expedition in Half Moon Bay / Monterey Bay was so successful that we have decided to make a repeat the journey this year for those who would like to get up close and personal with our cetacean friends, or who would simply like to hone their fluting skills in a spiritually rich setting.

We are very excited to have the following joining us this year:

The classes run from July 7 to 9, 2016 in the always beautiful Half Moon Bay, California, just a half hour from always offbeat San Francisco.  See FlutesbytheSea.com for full details and early-mermaid / merman discounts and full details of the events and purchase tickets here.