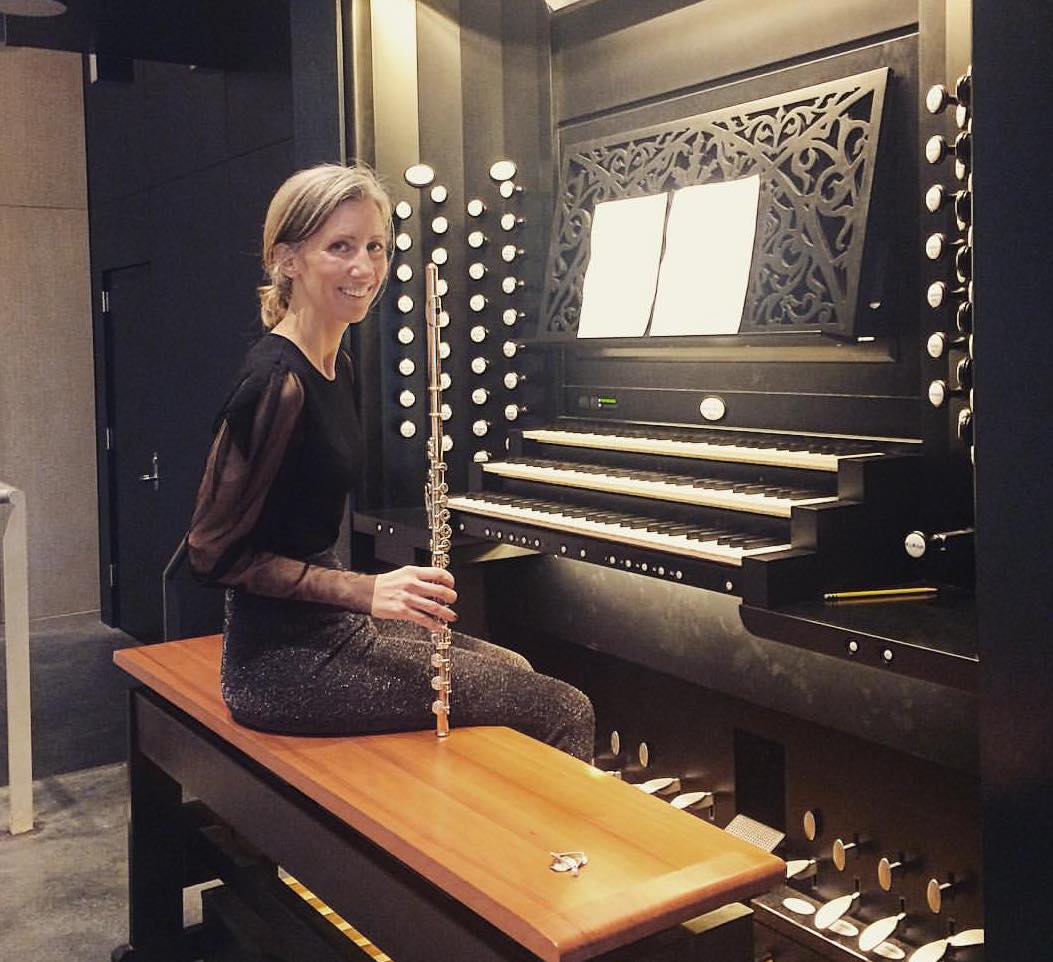 At this year’s Iowa Flute Festival, I took on a challenge given to me by flute professor and festival chair Nicole Esposito, to play flute and organ simultaneously! This is something I had tried many years ago at Flutes by the Sea, but I never had the chance to perform it. Since the University of Iowa had just gotten an amazing new organ in their new recital hall, this was the perfect opportunity for me to present this unique feat (pun intended). We even commissioned composer Joseph Hallman to write a piece specifically for this combination of flute and organ pedals, premiering at the concert. I also performed J.S. Bach’s e minor Sonata with the continuo part played on my feet.

I am not an organist nor would I ever call myself one. I am a classically trained pianist, but I taught myself organ after playing church gigs where I was required to play organ. I was always quite intimidated by the pedals, but I faked it quite well at the various church gigs I had. Most of the time, I never actually played the pedals, because if one note is wrong, it can sound pretty bad. I haven’t had an organ gig for quite a few years, so I knew putting this together would take some work.

Little did I know that the most difficult part would be finding a church that would let me practice. I spent at least a week walking into random churches asking to speak to their music director, explaining that I needed to practice flute and organ somewhere, only to be given odd looks by the church staff. Emails and phone calls to churches that never got returned, I was getting a little nervous as the concert was one month away. Luckily, a friend of a friend taught flute to a church music director’s daughter, and they agreed to let me practice a few times, 4 times to be exact.

I have been asked, how did I even start practicing something like this? The answer is, just like the flute! I practiced both instruments individually, with scales and intervals that I made up for the organ pedals, similar to our Taffanel and Gaubert, just to get familiar with the pedals and get the feet moving. Then I played the scales and intervals with flute and organ together, so I could get a feel for the coordination. Then, just lots of very slow practice with a metronome. Sounds easy, right? Not quite. I realized I needed to memorize the foot positions, otherwise, I was prone to playing the pedal parts on my flute because I had to think so fast.  Many organists have been commenting on my bare feet.  I am well aware that it is improper technique, but it gave me feet better traction on the pedals, so that is why I decided to play bare feet!  Plus, I just like playing barefoot in general these days.  This is definitely a novelty act, and I am already planning the next repertoire and performance.