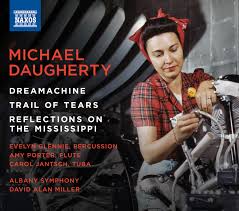 This ambitious album featuring the works of Michael Daugherty with flutist, Amy Porter, percussionist, Dame Evelyn Glennie and tuba player, Carol Jantsch, with the Albany Symphony and conducted by David Alan Miller, is said to be meant to explore “the relationships between machines, humanity and nature.”

The album starts off with Amy Porter using her signature velvet sound, on the first track, “Trail of Tears.” Porter’s flute does seem to cry mournfully at certain points in the first movement, “where the wind blew free,” in defiance or defeat in contrast to the dramatic thundering of percussion by the symphony, but also on occasion to float or tiptoe among the other instruments as if seeking a way out, appropriate to the title, and joining in triumph with them before striking out again alone.  Interludes of simple, soothing solo flute, played with a sultry tone, give way to more urgent and insistent passages, then alternating with bursts of doom-sounding from the horns and strings; the flute seeming to join with the symphony only to fall back to opposition.  Porter wails and soars with her impeccable sonority and brilliance.

The second movement of the piece, “incantation,” is given a spiritual and emotional life evocative of a Native American incantation, at times sorrowful or mysterious, at times joyous. Porter creates these images deftly with her evocative playing and exquisite sound.

The final movement, “sun dance” features rapid-fire playing from Porter matched to the racing tempo, and again, veers off with the piece in different emotional directions, slowing down only to come roaring back full speed.  Amy Porter’s outstanding musicianship weaves a luminous trail of power, magnificence and flair.

Porter delivers a commanding showcase of her talents in bringing "Trail of Fears" to life.  As to the works for tuba and percussion, we leave you to explore them as a great bonus when you check out this breathtaking album.