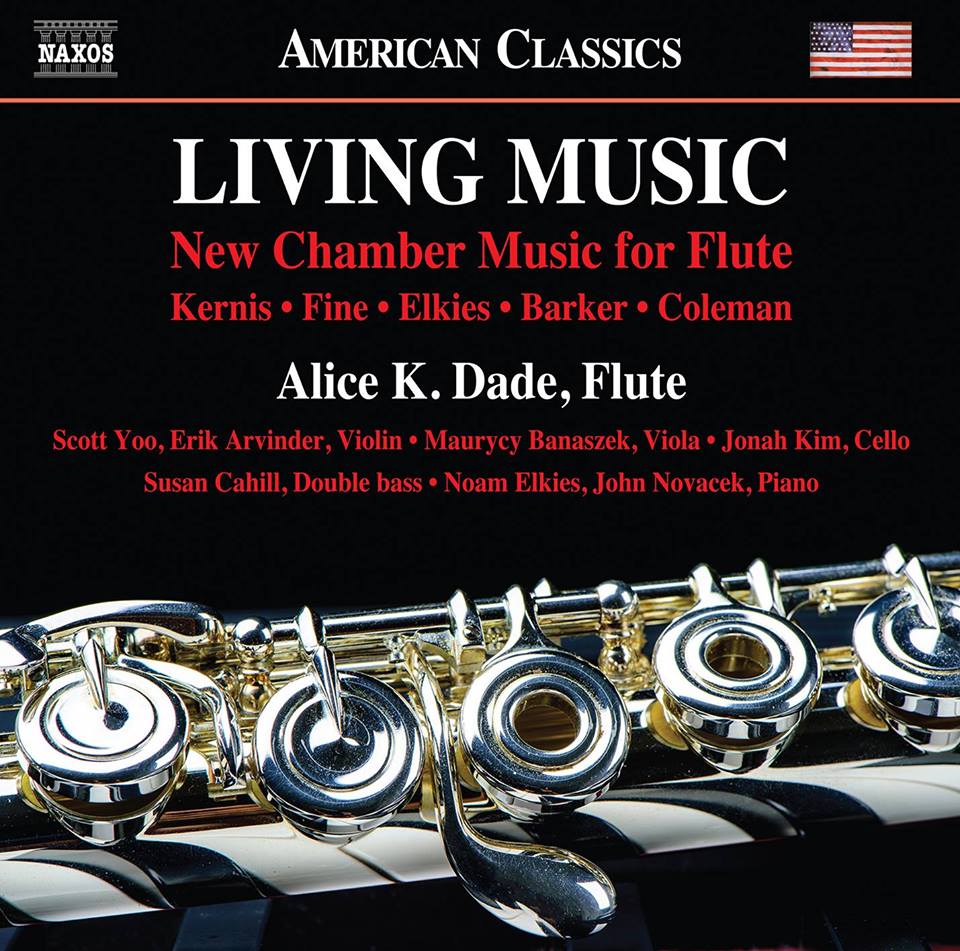 Alice K. Dade is the Assistant Professor of Flute at the University of Missouri, and is on the Artist Faculty of Flutes by the Sea, MOZAIC Festival and the PRIZM International Chamber Festival.

This is Alice K. Dade's first solo album, and it is a bold move into contemporary classical chamber music.  The selection of new works is diverse, united by Dade’s precise and animated playing.  Recorded at Skywalker Studios, the nuances of the pieces can be heard as she delicately brings out the pastoral feeling generated through the uplifting sounds of “Air”, String Quartet Version, by Aaron Kernis and “Skipping Stones” by Michael Fine.  Dade’s flute soars elegantly, with impeccable intonation and her liquid, brilliant sound.  She is accompanied by a first-class cast which includes violinists Scott Yoo and Erik Arvinder; violist Maurycy Banaszek, cellist Jonah Kim, and double bassist Susan Cahill.

The E Sonata for flute and keyboard in E minor Op. 40 by Noam Elkies, is reminiscent of Bach’s E Minor Sonata for flute and piano.  It begins with a contemplative movement featuring some unexpected high register flourishes, rising and falling as the accompanying piano, with the composer at the keyboard,  he seems to keep the mood in the earthly realm, evocative of the title “Eheu,” or “alas,” possibly as in “Alas, the fleeting years slip by” a quotation from Horace. But you don’t need to know that to feel the sense of urgency communicated by the almost burning interjections by Dade, played with decisive authority.  The second, two-minute nineteen second movement of the sonata,  “Mediation” brings the mood back up for Air for a moment before changing course halfway through via some abrupt “thoughts” that are symbolized by a short, interjections from Dade, then solo piano briefly seeming to tumble back to Earth.  The final movement, “Evoe!” is jazzy and fun, with a piano underlay and playful, dancing flute playing. Dade and Elkies play with expressive grace and power.

Jennifer Margaret Barker’s impressive, 'Na Tri Peathraichean’ means 'The Three Sisters... of Glencoe,' in Scottish Gaelic, and each piece is meant to evoke one of the three mountains in the title.  Dade captures perfectly the feeling of wild mountain places,  her runs and escalating lines, performed with precision and passion as if they were waterfalls or running stags.  Pianist, John Novacek, compliments Dade beautifully throughout the work.   The second moment, commences with Dade mirroring a flowing river.  Piano and flute sinuously entwine, providing a vivid landscape of colors and textures.  The third movement begins with the majestic introduction by Novacek.  Dade and Novacek are both regal and sensitive, beautifully capturing Baker’s richly evocative music.

Dan Coleman’s “Pavanes and Symmetries,” was arranged for flute and piano by Benjamin Loeb.  This piece allows Dade and Novacek to weave a their innate sensibilities with warm lyricism,  and to showcase their immaculate virtuosity.

In all, this is a great collection of diverse pieces united by Alice K. Dade’s confident performances.  She presents an splendid cornucopia sampling of American composers, and is accompanied by a deluxe  roster of impressive musicians.