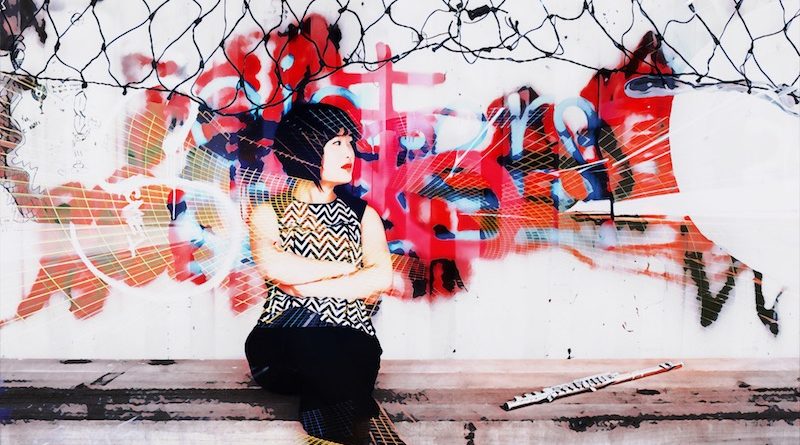 Melody Chua is not your typical flutist. Pursuing two master’s degrees in flute performance and transdisciplinary art at the Zürich University of the Arts, the 24-year-old Chicago native holds two bachelor’s degrees, one in flute performance (with Dr. Jonathan Keeble) and the other in music technology, both from University of Illinois at Urbana-Champaign.  Melody has gone where most musicians are afraid to go: the world of technology.

From childhood, Melody always had dual interests in music and technology.  A self-described computer nerd, video games, math, and computers were always of interest.  In high school, she studied with contemporary music specialist Shanna Gutiérrez and attended many new music concerts.  She also started working with composers while at university, particularly Benjamin D. Whiting, who holds a doctorate in composition and now collaborates with her full-time in developing the Chaosflöte software and running Null-State, a non-profit music technology organization.  Rather than be a flutist who only plays composers’ music, Melody wished to be equally as active on the artistic and production front.  Upon taking music programming classes at her university and from Whiting, she began working with Whiting as an artist, developer, and fellow composer.

While some flutists use pedals to process sounds (Melissa Keeling and Sarah Jane Hargis are great examples), Melody’s process is somewhat different.  She codes the sounds herself in a program called “Supercollider”(a software with similar capabilities as Max) and then maps the sounds to a customized wireless controller that attaches onto the flute. The program allows you to not only design the sound you want, but also map it to whatever you want and to any controller you are using.  She not only makes her own sounds but also her own hardware, and this is how she has created her sensor-augmented flute, which she has named the “Chaosflöte.”

While I assumed Melody created her own sounds by recording them with her flute, I was quite surprised and impressed that she codes them. The Supercollider software has useful libraries to help create unique, customized sounds, which Melody defines in blocks of code. She takes the sound signals of the flute, transforms them with the code, and then outputs the hybrid electronic flute sound through speakers. In a similar fashion, Melody also programs and designs her own performance visuals, which interact with the sensors on her instrument. She uses a combination of Max/Jitter and Adobe After Effects.

Melody plays a Burkart flute with her sensors on it.  Her sensor equipment consists of a custom keyswitch board with embedded motion sensor to do direct triggering of electronics (in place of a pedal board), and an airflow sensor where you can breathe into or out of to trigger electronics. All sensors are wireless so the flute communicates with the computer without cables.  The sensor-augmented flute’s current prototype, part of Melody’s master’s project, took about a year and a half to create.

Although each composition is different, Melody’s usual first step is visual: imagining a narrative, storyline, and theatrics behind the piece; creating a world and environments to traverse through; and then creating the sounds based on what the environment would sound like.  The flute actually does not come in until the later stages of the process, and she considers her pieces a part of the new term “comprovisation” (meaning: both composed as well as improvised). Nothing is absolutely fixed as far as her playing; it can spontaneously change based on the environment.  There is more of a structure to inform the player ofwhat to do,rather than a fixed score of notation.

While I was a student at Juilliard, I loved having full-time access to the Music Technology lab and all the equipment in it.  However, once I left school, I realized:

1. A Music Technology lab doesn’t exist in the real world.

2. Getting your own equipment is REALLY expensive.

Melody may be a student, but she often has to use her own equipment when traveling, so we talked about working solutions when taking this on the road.  First, you need a venue with PA system (set of stereo speakers, mics) and projection equipment (this can get tricky as some venues don’t have a large enough screen or a projector that isn’t powerful enough).  Melody’s master’s recital needed 3 screens, so recreating that atmosphere is not always possible; depending on the composition, one can lose the magic if smaller and/or fewer screens are used.  One option is to make sure your composition can downscale to a smaller screen and place more focus on the sounds rather than visuals. Melody’s dream performance spaces are at gaming conventions or planetariums.

Abstract art and the works of Salvador Dali and Picasso (his later works) inspire Melody’s visions behind her pieces.  An amateur painter, she is a fan of the Surrealist and Futurist art movements, and those aesthetics come to life in her works.

As technology evolves at such a fast speed, I asked Melody where she sees the Chaosflöte project in 2 years from now.  The first possible path she describesis to expand the immersion of the performance (collaborating with game designers), and where the piece can be seen as a game not only for the performer but also for the audience. She is taking a course on integrating virtual reality with music composition this fall, and she hopes to one day adapt the Chaosflöte to this format.  Her second vision, which is very much the opposite, is to create a reduction of the setup, to make the technology more portable, and not have to depend on the venue’s own set up or lugging around lots of equipment.

Also a Fulbright scholar, Melody studies with Matthias Ziegler in Zürich and has attended Grolloo with Eva Kingma.  Her high school flute teacher was Shanna Gutiérrez, who suggested she study with Ziegler.  He is also her project advisor and helps to guide her in balancing the technical vs. artistic aspects of the performance. Staging and improvisation are also areas they work on together.  She sees her studies in transdisciplinary art as an opportunity to collaborate and blend music andartdisciplines with the use of technology.

Melody’s outlook is: “As long as you’re willing to learn and take risks, the sky is the limit.”

Find Melody performing at the La Côte Flute Festival in Switzerland next month!