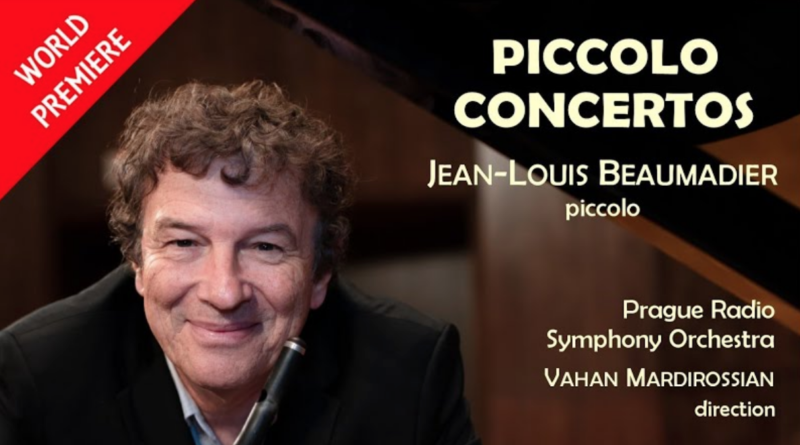 Piccolo virtuoso Jean-Louis Beaumadier has released his tour-de-force album of piccolo concertos with the Prague Radio Symphony Orchestra, Vahan Mardirossian, conductor.  This is the first ever album devoted entirely to piccolo concertos, and it is an important step in the continuing recognition and transformation of the piccolo.

Most of the works are by contemporary and 20th century composers, but included is a surprise, a concerto, ‘Molto Perpetuo’ by Carl Joachim Anderson (1847-1909). Flutist Kyle Dzapo found the score of the piece, with just a few orchestration suggestions, and Beaumadier invited composer Veronique Poltz to create the excellent orchestrations, brilliantly played by Beaumadier, whew!! Her concertino ‘Kilumac’ opus 36, (2018) is also included on the album.

The other works on the program are Florentine Mulsant’s Concerto for Piccolo and Orchestra, Lowell Liebermanns, beautiful and thrilling Concerto opus 50, Touch of the Sky by Regis Campo, an evocative, colorful work inspired by looking through the window of an airplane, and the last completed work by the important French composer Jean-Michel Damase (1928-2013). This concerto was written for and dedicated to Jean-Louis who premiered it posthumously. It’s a lyrical and humorous piece, representative of Damase’s unique style, and I hope it becomes a staple of our repertoire for piccolo.

Throughout the album Beaumadier performs to perfection, always with complete understanding of the composers intent and adding his own interpretation, joy and virtuosity. A wonderful album to explore the range and possibilities of the piccolo.