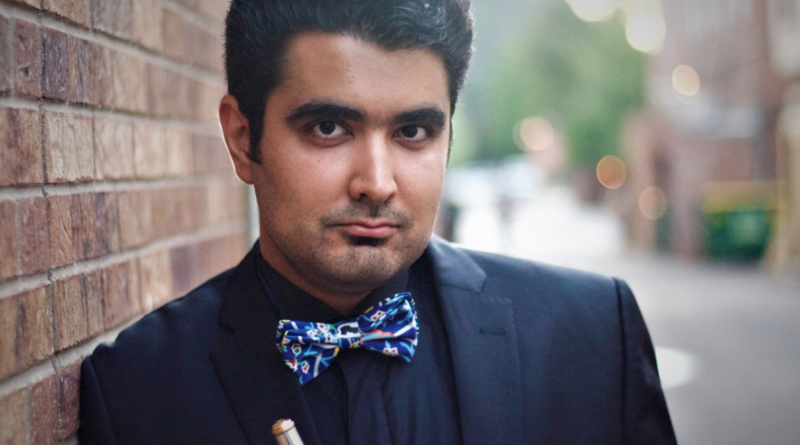 In February 2019, I received an email from Aspen Contemporary Ensemble’s Artistic Director, Tim Weiss, asking me to prepare a concerto to perform with ACE in the coming summer season. I was returning for the third time as ACE’s flute fellow, and hearing that I will be playing a concerto with this wonderful group and its amazing audience was immensely thrilling.

Earlier that year, Tim had mentioned the possibility of a concerto and we had preliminary talked about Joan Tower or Elliot Carter, but the email said I will be playing a piece that I was not familiar with at all. Ruah for flute and orchestra by Judith Shatin. I Immediately began reading about Judith Shatin’s life and work. Reading through Judith’s website (www.judithshatin.com), articles about her work and her interviews online got me excited because I realized this is a fantastic opportunity to give life to a lesser-played piece by a remarkable composer.

At the time, I was not aware that Judith was also adding a percussion part and therefore the edition I would be playing in Aspen is a brand-new revision with new engraving and new parts. Ruah was composed for and dedicated to flutist Reneé Siebert. She premiered and recorded the concerto with the Prism Chamber Orchestra in March 1987 and premiered the flute/piano version at the National Flute Association annual convention in 1994.

I was waiting to receive the score for a few weeks. Meanwhile, I was listening to the piece’s only available performance online. The chamber orchestra version of Ruah is recorded on Piping the Earth, a CD of Judith Shatin’s orchestral music, #8727 Capstone Records, re-released by Ravello in digital download or CD format on Parma Records. You can easily find it on Spotify. It is a dazzling performance by the piece’s dedicatee, Reneé Siebert.

Ruah means “spirit, breath” in Hebrew and refers to the part of the soul that mediates between the body and the spirit. Being familiar with Persian mysticism, I came across a similar idea in my culture and was able to connect very deeply with the piece.

At the same time, because of the composer’s background in flute, the piece was truly well-written for the instrument. Although Ruah is an extremely virtuosic piece, all the passages and technical elements are perfectly practical. This makes practicing Ruah an enjoyable challenge.

After arriving in Aspen, I had a short period of two weeks to deeply prepare the piece before the festival started and I knew I would be busy with weekly concerts. I had the chance to play the concerto for Nadine Asin, Mark Sparks and Demarre McGill and use their depth of flute knowledge to polish my interpretation. Finally, I met Judith five days before the concert. She kindly agreed to meet with me and generously came to the rehearsals.

Going through the piece with the composer, and, with a composer who is familiar with the instrument you are playing, can be a daunting experience. However, I was so relieved when I realized how open and welcoming Judith was with me and her own piece. Note by note, line by line I played, and she gave me feedback. In some cases, she gave me very specific advice even on note length, attacks and other technical matters that I hadn’t heard very often working with composers.

Finally, the main issue came up that has always made me think very critically when playing a piece by a contemporary composer. As flute players, we all have unwritten rules about note lengths, vibrato, sound and color and this gets more specific depending on the musical culture in which you have learned the instrument. But from a composer’s point of view, these issues don’t exist and realizing how they think about the “sound” in addition to “playing flute” can be a very helpful eye opener.

As flute players, we barely play short notes. We barely leave vibrato completely off for an entire section or dare to distort the sound in order to show contrast. Most of the time, we have been told that the ultimate way of playing is to be loyal to a sweet “flute” sound. However, all the mentioned options were on the table in my meeting with the composer. Judith almost changed every single attack to a shorter and firmer one, revised my choice of articulation on many occasions and gave me a green light to absolutely omit the vibrato at points, even in the most lyrical portions of the piece. Considering her background as a flutist, it was fascinating to see how much her compositional pallet of colors might differ from what we traditionally have in mind. Over the next days, we went through the piece with the ensemble and she changed many small details on the go. I felt very grateful to have the composer in every single rehearsal and be at the concert.

Ruah is cast in three movements and each is divided into multiple sections. Overall, Ruah has six cadenzas (including a cadenza in the form of a flute and clarinet duet) which makes the piece challenging since the soloist is playing multiple small solo pieces, integrated with the rest. The first cadenza - the longest one - opens the piece. Following the piece’s spiritual idea, flute player goes back and forth between singing and playing in the first movement. This effect creates a mystical aura.

The second movement opens with very wide intervals in the strings section and after several instrumental solos, a gripping flute melody enters on top of the string drone. I was immediately captured by this melody to the point that for months, I used it as tone warm up since it had many challenging intervals.

The third movement has two cadenzas connected by a fast-slow section. After a short introduction, the first cadenza “wild” is immediately introduced. It features a trill using alternating trill keys, creating a unique and compelling timbre, and octave slurs and tremolos augment the effect. Following the cadenza, the orchestra returns in a fast tempo, before echoing a slower tempo from the previous movement, leading to the final cadenza and whirling close. This final cadenza also uses trills at its core, creating a dramatic effect. These trills quickly shift octaves and are combined with other extended techniques such as harmonics and timbral trills.

The recent performance of Ruah can be accessed both through the author’s SoundCloud and website.

Coursing Through the Still Green

When the Moon of Wildflowers is Full

Reach Through the Sky

Dr. Mehrdad Gholami holds degrees from Tehran University and TCU School of music. He is a performer and educator based in DFW and his recent performances include his concerto debut with Aspen Contemporary Ensemble. www.MehrdadGholami.com