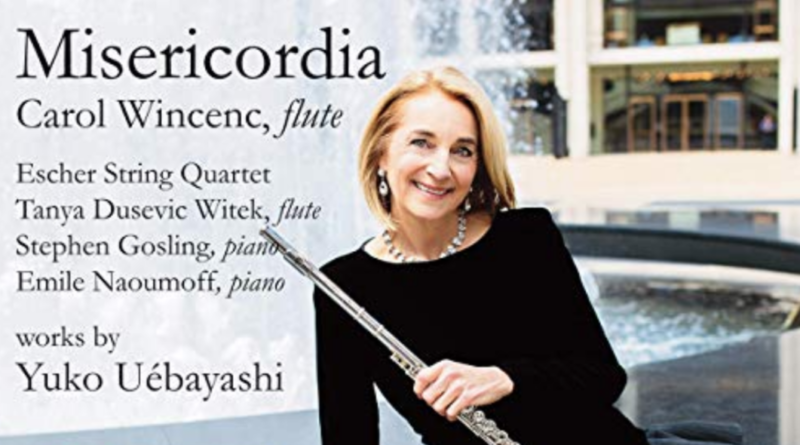 Internationally renowned flutist Carol Winsenc joins forces with the Escher String Quartet, Tanya Dusevic Witek also on flute, and pianists Stephen Gosling and Emile Naoumoff to present this dynamic recording of the compositions of Yuko Uébayashi. The opening piece, Misericordia pour flûte et quatuor à cordes was composed for Carol Wincenc. Hailed ""Queen of the Flute"" (New York Magazine) at the outset of her, now, brilliant 48 year career, flutist Carol Wincenc was First Prize Winner of the (sole) Walter W. Naumburg Solo Flute Competition, as well as the Lifetime Achievement Award recipient from the National Flute Association, the National Society of Arts and Letters Gold Medal for Lifetime Achievement in Music, and Distinguished Alumni Awards from Manhattan School of Music and the Brevard Music Center. During the past two seasons she performed, recorded and gave masterclasses as an exclusive Burkart Flutes Artist in Beijing, Shenyang, Seoul, Warsaw, Prague, Venice, Nice, and Thessoloniki.

Carol Wincenc has a new CD! It’s called Misericordia and features works by the composer Yuko Uebayashi for flute and string quartet, Flute duo and Flute and Piano.

Written for Carol the opening piece and titular work is Misericordia for flute and string quartet (2013), played by the excellent Escher String Quartet, the piece is comprised of 10 short movements, beautifully played by Carol and the quartet. Uebayashi wrote the piece in 2013 to honor and reflect on Wincenc’s joyful and loving personality. They spent time together in Paris, here’s what Uebayashi says about Carol and this lovely piece:  “once when I was traveling in Italy, I happened to come across a work of art. The title of the work was ‘Madonna della Misericordia’ The Madonna’s arms were spread wide open, enfolding the many people following her in a protective embrace. In my mind’s eye, Carol and the painting joined together, and the music and angels just came to me!” The images of the Madonna in the painting and the image of Wincenc from the composer’s view, were very similar. What was particularly striking to Uébayashi was the correlation of the painting to Wincenc: also surrounded by many musicians, her friends, her students, her family, and how she loves them. This painting led Uébayashi to title her new composition Misericordia for Flute and String Quartet. (1)

Misericordia consists of ten movements with the following titles:  The First Month “Awakening,” The Second Month “Bursting with Life,” The Third Month “Carol’s Lullaby,” The Fourth Month “Scherzo –The Little Mischief,” The Fifth Month “Wandering Through the Universe,” The Sixth Month “Waltz of the Roses and Bees,” The Seventh Month “Lights of the Passing Barges,” The Eighth Month “Feast of the Forest Animals,” The Ninth Month “Turning to the Light,” The Tenth Month “Celebration”

The piece is truly is joyous, humorous, passionate and beautifully crafted by the composer, a true reflection of Carol’s essence!

The other works on the album include Au-Dela du Temps for 2 flutes and piano with flutist Tanya Dusevic Witik and pianist Stephen Gosling and Town Lights with Tanya and pianist Emile Naomoff.  All played with beauty and understanding of this composer’s music.

This is a wonderful album played with love and commitment, with Carol’s beautiful sound, technique in musical understanding. We hope you take the time to listen!!