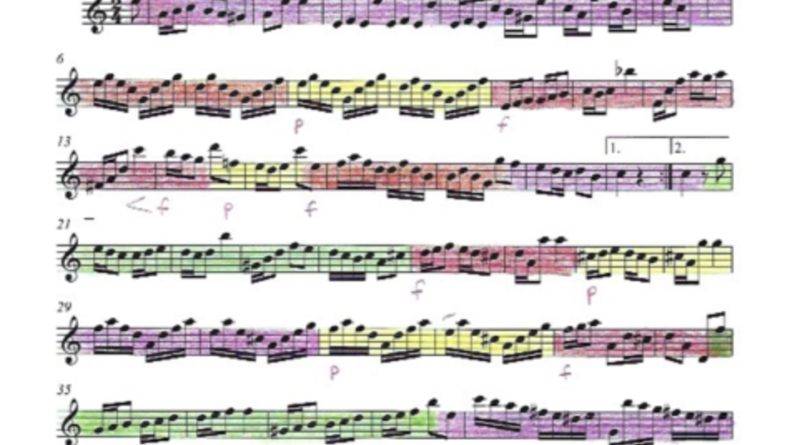 A great performance often calls for a healthy combination of moment-to-moment inspiration and strategic score preparation. We make hundreds of musical and non-musical choices during a performance. Some of these choices are already suggested to us by the composer, but others can be added to a score with a bit of creative interpretation from the performer. Incorporating color within a score can easily denote changes in tone color, articulation, dynamics, tempo changes, style, and even outline the principal notes in phrases using a Shenkerian-type of background/foreground analysis. Talk about a good road map for a successful performance!

The term “tone color” holds different meanings for each of us.  For some, tone color simply refers to sounds that range in quality and context. For others, tone color calls to mind mental images inspired by the music, or various descriptive words such as “flowing,” “edgy” or “bold.”  Tone colors may also be associated with different colors of the rainbow, each color representing a particular type of sound that moves in and out of other color spectrums and the music progresses.  Trevor Wye, in his Practice Book for the Flute, Volume I, Tone, refers to a yellow or hollow sound by stating, “The Aquarium. This needs a hollow, “pure” tone which will be called a “yellow” tone.  Think of deep, dark green water and silent fish swimming gracefully about.”

I have developed the following color scheme to notate tone color in a score. I must stress that these colors are based on my own interpretations but can also be used as a template to create your own. I encourage others to create their own color schemes reflecting changes in tone, dynamics, and musical styles. Dare to be different when designing your own tone color rainbow!

Red – The color red is associated with a very large sound, voluminous vibrato, and typically used with fortissimo (ff) dynamics. This color is reserved for climactic moments or when there is a very bold theme that must be brought out of the texture.

Orange – Orange is used when building up to climactic moments in the score. Orange does not necessarily represent the most important themes but those that are still substantial within the context of the music. The sound is still large in quality, however vibrato speed is a bit slower than passages in red. The dynamic level for this color is generally forte (f).

Green – Green is a full yet pleasant sound.  Not as intense as orange or red, but used in opening statements of a theme or when the music is more controlled. This color may also be used in slower cantabile phrases at the height of the primary theme.  Green is used for music generally in the mezzo forte (mf) dynamic range.

Blue – Blue is used in slower movements where a beautiful, simple theme weaves in and out of the music. Slower but pronounced vibrato is accompanied by a pure, simple sound still containing a clear tonal center, but not driving toward a climax.  Blue is often used in conjunction with slight variations of purple, indicating the high point of a relatively calm phrase. Blue is reserved for mezzo-piano (mp) dynamic passages.

Yellow – Yellow is a quiet and mysterious sound. Used when the music is a mere whisper, passages were written in yellow require very little to no vibrato.  The music is very still with no forward direction.  Dynamics range in the piano (p) to pianissimo (pp) levels.

Once a color scheme is defined, the next step is to incorporate the color plan in the score. This can be accomplished in two ways, 1. Coloring within the score itself, or 2. Drawing a color spectrum above the staff. Using the first method, simply color in the staff with colors assigned to each measure.  In the following example taken from the 3rd movement of Partita in A minor for Solo Flute by J.S. Bach, a color scheme is shown weaving throughout the manuscript.  This provides as a tone color “blueprint” for the performer:

The second way to incorporate a tone color plan is to draw a color spectrum above the music. This will allow other marks to be added in the staff without disturbing the tone color blueprint. In the following example, taken from the Flute I part from Rachmoninoff’s Piano Concerto No. II, a tone color spectrum is placed above the staff at the top of the page. As the music builds in dynamic and intensity, the colors shift from blue to purple to orange and red:

Color may also be used as a practice tool to indicate changes in dynamics, tempo, and articulation. Connecting colors to changes in the music helps performers anticipate technical and musical shifts long before they happen. For example, a large green circle can prepare the brain, the air, and subsequently the fingers to go faster or be louder, even if it is located just within the eye’s periphery. In the following example, color is used to highlight upcoming changes in dynamics, articulation, tempo changes, and cues:

In this example, taken from the Flute I part from M.J. Glinka’s Russlan and Ludmilla Overture, all dynamics (including crescendos and decrescendos) are highlighted in green, cues are highlighted in purple, accents in yellow, articulation in orange, and tempo changes in blue. For the visual learner, using color to achieve musical variety taps on visual strengths to build a musical blueprint based on thoughtful interpretative and subjective decisions.

Color may also be used to outline the most significant notes in each phrase using a Shenkerian style-analysis. This type of analysis draws the performer’s attention to where additional emphasis can be placed on specific notes during a performance, either by using more vibrato or holding pitches slightly longer than the surrounding notes. In the following example, taken from the Carmen Fantasie by Francios Borne, the most important notes of the opening passage are circled in red. These notes will receive some added sparkle with faster vibrato (particularly in measures 17-24) or by holding the note slightly longer for interpretive emphasis (particularly in measures 25 onward):