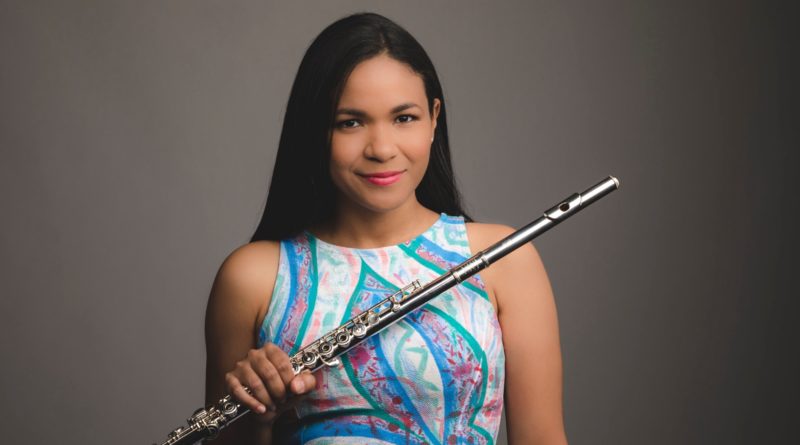 Ana Paola Rincones is a Colombian and Venezuelan flutist formed in El Sistema- Venezuela and Haynes’ Ambassador Clinician. Ana Paola is based in Los Angeles, maintains a private flute studio, and is co-founder of Global Arts, a music program for underfunded communities and professional development workshops for educators.

This is a wonderfully diverse journey into the colorful music of Venezuela. The first track is the lively "Calalú" and features trumpet player, Gerald “Chipi” Chacón.  Jorge Torres is the composer and arranger.  With hints of jazz and vivid rhythms.  The flute and trumpet compliment each other beautifully.

The second track, "La Negra Atilia" features Jhoabeat and was composed by Pablo Camacaro.  This piece starts with an ethereal flute solo and then Jhoabeat lays a wonderful bed of beats perfectly juxtaposing the lyrical flute.

"Contraraña" is by Edward Ramirez and the arrangement is for flute, acoustic guitar and percussion.  An idiosyncratic meandering melody provides a delightful framework for this acoustic set.

"Mi Patio" is by and features guitarist, Aquiles Báez.  The tune starts with a sublime guitar introduction for the sultry Alto Flute played by Ana Paola Rincones.  This is a sensual duo reminiscent of a balmy oceanfront evening in Venezuela.

The lively "Joropadas" by Gustavo Figarella is festive and clever, written for flute and guitar/cuatro.  A sort of Venezuelan Choro, otherwise known as a Joropo, this piece is likely to become a flutists' favorite to perform.  This piece is masterfully interpreted by Ana Paola Rincones.

The next track is called "Merengueto" by Edward Ramirez, arranged by Jorge Torres.  This piece has more of a typical jazz feel.  The flute soars  above the jazzy chord changes, alternating solos with the cuatro, the Venezuelan guitar.

Un Día Diferente is by Pablo Camacaro is a gorgeous and melancholic tune, grippingly played by Ana Paola Rincones.

The Hibiee-Jibiees by Marco Granado, arranged by Gustavo Figarella features Raimundo Pineda on the flute along with Ana Paola Rincones.  This exquisite piece is magnificently arranged for two flutes and guitar.  Bravi to all the musicians involved in executing this track as it is a ravishing example of the energetic and engaging Venezuelan music and rhythms.

"Notas a Paola" is an inspiring new CD by flutist Ana Paola Rincones.  Her imaginative programing and innovative choice of arrangements make this a fascinating sequence to listen to.  She is a fountain of creativity coupled with truly enchanting playing.  Ana Paola Rincones is a Flute Rising Star, and a brilliant Cultural Ambassador of Venezuela.