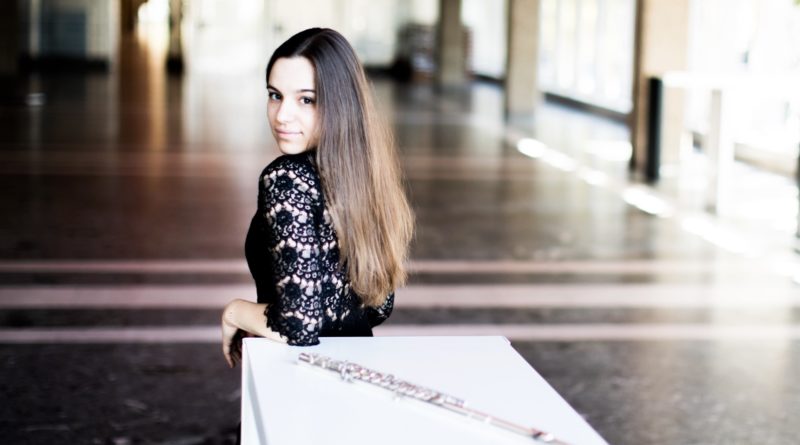 French flautist, Joséphine Olech, enjoys a busy career as a soloist, chamber player, and orchestral musician. She was appointed Principal Flute of the Rotterdam Philharmonic Orchestra in 2017 where she regularly plays with the world’s greatest musicians. A graduate of the Paris Conservatory, Joséphine is the First Prize winner of the Carl Nielsen International Competition (2019). Her debut CD, "Reconnect", will be released this fall, followed by a concerto CD.

I haven't had a very long career yet, and it's hard to look back in this way but on the top of my head here are some strong moments :

What do you love most about teaching?  Masterclasses?

I love that moment when you can see in the eyes of the student that what you just said actually helped them. When I give masterclasses, the students are often almost my age. In the beginning it made me a little uncomfortable, and I often thought, "I'm just a few years older than him/her, why would he/she give any credit to what I have to say?" But I soon realized that it was in fact also an advantage.  The challenges they are facing - like auditions, competitions - are  the ones I was facing very recently, and they are still fresh in my mind, so in fact I have quite a lot to say about them. Of course, I hope to become a better teacher with time and experience. I have huge respect for teachers like Sophie Cherrier, who after so many years and so much teaching background, seems to be discovering new ways of teaching every day.

I like the kind of concentration which can only be achieved on stage and with adrenaline. When you are "in the zone", and it feels like nothing is more important than what is happening on stage. It can be scary sometimes, but also so thrilling! I have to say, I think I'm a bit addicted to adrenaline. I always get nervous during a concert. It doesn't always feel comfortable on the spot, even horrible sometimes. But then you end up fighting for each note, and I think it brings something even more special to the music. And when it's finished, you just want to go back on stage and start again! Some of my favorite concerts are the ones for which I was the most nervous.

I also love it when you play a piece several times, like on tour, and your colleagues or the conductor surprise you with something different every time. I am the kind of player who likes eye contact during an orchestra concert, and I often smile at my colleagues when their eyes meet mine and when I can feel they are having as much fun as I am.

I recorded two CD's this summer, which will be out soon:

In between those two sessions, I also recorded two duets with clarinet Martin Adamek's album, Carter's "Esprit Rude, Esprit doux" and Villa-Lobos "Choro n.2". This album will be out in December.

Playing in my orchestra following the new Covid protocol (distance in between musicians, shorter concerts), waiting for my CD's to come out, and playing a few chamber music concerts and solo concerts on the side. I am very happy that concerts are starting again, and I hope the situation will slowly get back to normal.

I would like to develop an even more eco-friendly life style, to travel (in an eco-friendly way), to discover new things, new music, meet new people, speak dutch better, learn German, learn how to drive a car (I still don't know how to!), and eventually keep learning things...

What are your goals professionally?

Of course I would like to continue developing as an orchestra musician.  There are so many symphonies I haven't played yet, and I still feel like I am learning every day. But I would also like to extend my horizons to different styles, mostly for my own cultural knowledge. I recently bought a traverso and I am enjoying discovering it a lot! By the way, I have so much respect for people who can play in tune with that thing!! I also started to learn a bit of Irish flute during the lockdown, and I have a project involving jazz coming up. I don't necessarily need to be doing these things on stage for now, but I am discovering a lot about classical music when I play these other styles.

I get a lot of inspiration from other arts, like cinema, theater, literature, paintings... Musically, I also get very inspired by non classical music genres, like jazz, pop or traditional music... It changes regularly, but lately I have been very much into Irish music, as I just mentioned. I think there is something very true and very touching, immediate about these styles of music that we sometimes tend to forget when we play classical music from the score.

On a more personal level, I also find Nature very inspiring. This is something that has been growing on me, actually. I remember going on walks in beautiful places with my parents as a kid.  They almost had to force me to go and I did not realize what was so incredible about Nature! Only since a few years do I feel really deeply moved by beautiful landscapes. I have NO IDEA why it took so long to have this effect, but I'm glad it finally did!

Preparing for the Nielsen competition while playing in the orchestra almost full time was of course a big challenge.

But my biggest challenge was probably something else, coming back to the work after being literally destroyed by a rude conductor during a rehearsal. He was completely out of line, and the management of my orchestra eventually had to tell him that the way he spoke to me was unacceptable. I also got the full support of all my colleagues. But even so, what he said truly hurt, and it took a lot of professionalism to come back to play the concerts with him the rest of the week, and even for the other projects that followed for a few weeks afterwards. In the end, I am glad I found the strength to come back and to play well, and I am sure if something like that ever happens again, I will be stronger.

Sophie Cherrier and Nathalie Rozat, my teachers from the age of 9 until the end of my studies, taught me most of what I know about the flute. They are both very kind and clever teachers. They taught me love of the flute, of music and of sound.

As I mentioned before, The Amsterdam Royal Concertgebouw section taught me basically all I know about playing in an orchestra, and introduced me to ways of playing which were different than the french playing I was used to.