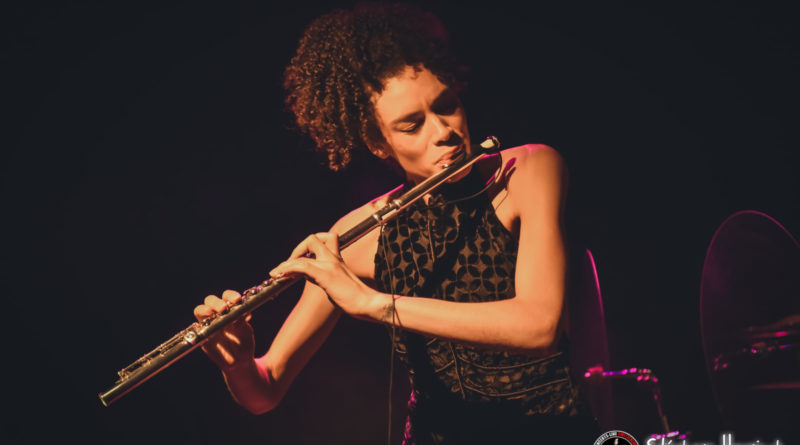 Rachel started music at just 3 years old; falling in love with the flute and entering the conservatoire at 6 years old. She studied with flute master players such as Pascale Feuvrier, Chrystel Delaval (soloist of the national orchestra of Lille) and Frédéric Chatoux (soloist of the orchestra of the Opera of Paris), and received her Master's degree at the Sorbonne.

Whilst studying the flute, Rachel also attended vocal academy with Gisèle Fixe and Vania Boneva (soprano of the Opera of Paris). Occasionally a backing vocalist for artists like Ed Sheeran and Jain, Rachel has performed on many TV sets, but also prestigious venues such as 'Arena of Nîmes' and 'Top of Paris'.

She guests on numerous studio recordings, and in 2016 she wrote and performed in her first children's musical.

At the beginning of 2017, Rachel launched her electro-pop project RoSaWay, releasing her first EP with the drummer Stéphane Avellaneda.

Why did you start playing the flute?

I love this anecdote. My mother wanted me to choose an instrument because she made me study music when I was 3. At the age of 5 or maybe a bit older, it was time to pick an instrument. But I had no idea of what I wanted to play. My mother bought me a lot of CD’s of classical music, she took me to a lot of concerts and recitals, but nothing, and one day, she took me to the cinema to watch Bambi and in the subway I just heard the sound of the flute (of course I didn’t know at this time it was a flute). So I asked to go to see the musician. I was so charmed by this sonority. When I saw this man playing the flute I just said, “That’s my instrument! I’ll play the flute!”

Oh RoSaWay... It’s the project of my life. It started with my boyfriend SteF 4 years ago. We shared the stage a few times (he’s a drummer) with different bands and we always had this connection on stage. So we did a video five years ago. It was just a little something more for fun but one of our friends asked us, “Will you record an album?” It was definitely not the idea and at this time my boyfriend was touring with Ana Popovic (blues guitar player) all over the world and had absolutely no time to start his own project.

But one day, it was 4 years ago, this idea came to me like a piece of evidence. I woke up and said, “We should have a band together, just the two of us and see.”

That’s when and how it started. It was a process because Stephan (my bf) was still touring with Ana a lot. But one day, he said, “Let’s do it for real now.” So he left Ana’s gigs to be 100% involved in our RoSaWay project. So, we released our very first song in May 2017 and started playing live in September 2017. Since then we have played more than 100 shows in France, USA, Belgium, Italy. We released our second EP “Dreamer” (Oct. 9th) on the two American labels Infinity Gritty and Ropeadope records.

How do you compare the US "music scene" to the music scene in France?

Well, it’s very different, first, in terms of venues. The clubs don’t work the same way. You won’t find clubs with 6 totally different bands playing the same night in France. There are more rules and specific evenings depending on the type of music.

Like SteF used to say he remembers went he first moved to New Orleans that was this concert series in Louis Armstrong Park, 6 bands going from jazz to hard rock! The same audience would stay and dance to each band’s music. Cause when the music is good, the music is good, no matter what kind it is.

Second, I feel like clubs in the States are more open to “new artists”! Even if you’re unknown you’ll get your chance to perform and say what you have a say.

The same thing for the audience, people are not afraid of going out to discover new music.

How would you describe touring with RoSaWay?

Touring with your own project is a unique experience. I never had this feeling before. It’s hard to describe the feeling you have when you’re on stage playing your own music, singing your own words, exposing yourself: mind, soul, and body (if I can say).

That being said, it’s also a lot of pressure, so I give my respect to all the band leaders!!!

I have to say, the fact that we are a duo makes things easier. I’m totally aware of that.

Do you feel that your degrees in music have served you well?

Yes of course. I had the chance to learn music and flute with amazing French soloists. It was so inspiring to meet these incredible musicians who shared with me their experiences. I feel really lucky.

They also teach me how to be my own teacher. That’s maybe why I still practicing my instrument and still learning new things like looping etc…

You have a large Instagram following. When did you start using Instagram? Have you found it helpful in establishing your career?

I started using Instagram 6 years ago. In the beginning, it was more for fun. I was in a weird state of mind: just ended my degrees, I had no real job as a musician, and felt mostly depressed and useless… After a few months I virtually meet many flutists from all over the world. It appears that the flute community was not that big and really supportive like a family. Some people out there asked me to share more about my journey than to post short videos etc… That’s how and when my Instagram became professional almost like a portfolio.

I posted an alto flute video that became “viral” with 120K views and things started to happen for me. I’ve been contacted by 3 productions for tours… I was the first one really surprised, to be honest!

Then When I started my band RoSaWay, Instagram was the best way to promote it. The community was really supportive and helped me spread the word. We had the opportunity and the chances to play many times in the States and I think it would not have been possible without the Instagram connections. It’s always so good to meet in person people you are talking to for years then meeting them after a show!

It’s a great tool for sure. It definitely helped with sponsoring as well as playing at NAMM SHOW for example. We played there for Audix, Headrush, and Beaumont. Such a treat!!!

Are people surprised to see you play flute in a pop band?

That’s not an easy question … I’m not really sure.

I guess some musicians don't understand why I quit classical music to play pop music. I guess many people thought it was a shame cause I was a decent classical musician. Then after two years, when we started playing in different countries and mostly after our runs in the US, people started to think that was an interesting move and approach of the flute.

For the audience, it’s different I think. A lot of people think it is unique and kind of exotic.

What are your goals for RoSaWay?

We want to be on stage! That’s our goal. We are currently working with a great team getting ready to go on the road and create more music. So going back on stage is our main goal.

What are your goals as a flutist?

I would like to prove that being a flutist is really cool and you can succeed with your own non-classical project. So many people told me they were only one direction to take. I would love to prove we can do differently.

Life in general, my family, my friends, people I meet, and other musicians of course. I listen to all kinds of music.