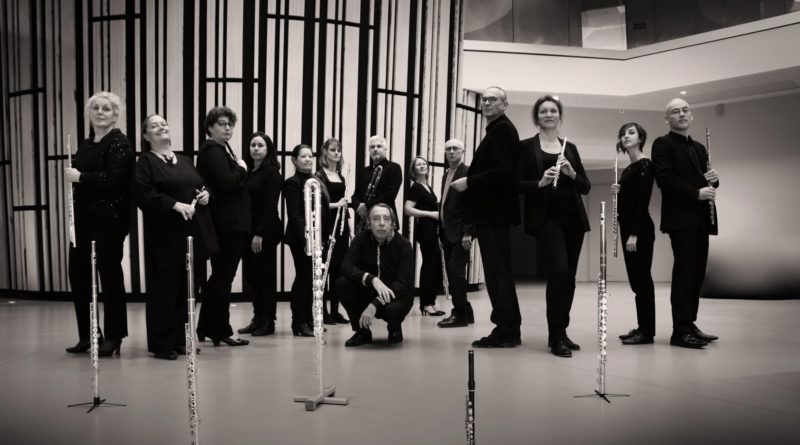 Will Hoogakker (*1957, The Netherlands) started at the age of fifteen with flute and piano lessons. In addition, he started composing self-taught. In 1985, Will Hoogakker was admitted to the conservatory of Amsterdam on the recommendation of Ton de Leeuw. He studied three  years composition; first with Robert Heppener, then also in Rotterdam with Klaas de Vries and in Maastricht  with Henri Delnooz. After this period he studied with Daan Manneke for two years. In that period works by Hoogakker were published for the first time at Donemus (Publishing House of Contemporary Classical Music).

Question: Wow that’s my friend Will!  I must write and congratulate him.

Will:  I hardly know what is happening these days. It is all so intense and overwhelming and beautiful. Suddenly so much attention for my music. I can’t think straight. I didn't even realize how important this ensemble and this project are, and how happy the publisher is with the collaboration. The concert and this project are seen as an important and rare event in the music world. I can hardly believe it’s true that my world premieres are performed in this concert and that I played a big role in the development of the project. I’ve received e-mails, messages, congratulations, a request to compose new pieces, my partner is very proud of me. In December there will be another concert by this ensemble playing my music in Paris and the music publisher Donemus would like to see this concert available at stages in The Netherlands as well.

I’m so overwhelmed; I never expected this and I have to learn how to deal with this appreciation!

Question:  When I first knew you, you were just trying to get into the Conservatory. How did it all begin?

Will: I was about 15 when it started. My sisters reluctantly played recorder at school. When they were not home I taught myself to play the recorder, In a few weeks I had learned everything in the five recorder lesson books they had and I wanted to continue. I wanted to play more and then I started improvising on the recorder.  When I turned 16 my parents were thinking of buying me a moped – boys like mopeds, right? But I though, that’s really expensive and for the same money, they could buy me a flute. So I got my first flute and I started at music school. It was a new world for me full of discoveries and after a year I also had piano lessons. After 2 or 3 years of lessons I needed a better flute. My mother took a job picking apples in order to get the money to pay for that flute.  Years later I found that it was a very special instrument that was mostly sterling silver rather than plated and a previous owner had modified the pads so that they worked much better.  I don't play the flute any more, but I would never part with it. That flute helped me through many difficult years and gave me direction in my music. It brought me a lot of luck and gave me structure and discipline from practising every day. I owe that instrument (and my mother) a lot.

In 1980 I did an entrance exam for flute at the Conservatory in the Haque. Flautist Frans Vester was the examiner. He compared the music world with the construction world; a bricklayer has to be able to build something exactly as the architect intended and the same is the case with music. Frans Vester asked me if I had thought of becoming an architect in music myself. He felt that creativity and the urge in me that I could not properly convey at the time. He introduced me to Louis Andriessen whose pupil Huub de Vriend accepted me for private lessons in music theory and composition. I worked for several years as a music copyist to get some income and eventually In 1985 I got a scholarship to study composition at the Conservatory for 3 years, of which one year with Robert Heppener in Amsterdam.

I think I was never satisfied with music lessons, either in flute or piano. I always wanted to explore more than what was written on the page. The music is always calling for more. A friend compared me with the Pied Piper but said that instead of drawing the rats and the children away from the town by playing the music, I was drawn to follow the music myself and it’s a journey that never ends. That mountain is always moving ahead of me and I keep on the road. It is a huge challenge and sometimes there is some wonderful result like this Dutch project.

Question: How did that project came about?

Will: In the spring of 2019, I sent my composition “Music for nine flutes” (Donemus,1991) to Resonances XXI, a flute ensemble in France. My composition was received enthusiastically and they offered to make a video recording of my composition and hold a concert in Paris.  And so an inspiring interaction with the ensemble began.

Then we decided to build a Dutch project to make a concert program with compositions for flute ensembles by contemporary Dutch composers.

I searched for Dutch compositions in the catalogue of the publisher Donemus and found a number of suitable works. I also wrote to a number of composers asking if they had anything available for a flute ensemble. I sent all the compositions to the orchestra for assessment so that their committee could make a choice for the planned Dutch project.

In December 2019 conductor Olivier Guion travelled to Amsterdam. He was very enthusiastic about my composition and wanted to talk with me about it. I also put the ensemble and conductor in touch with Donemus and introduced the conductor to various Dutch composers.

I made a second composition for nine flutes, a retrograde version of my original composition. Both pieces can be performed separately as independent works, but can also be combined as a cycle belonging together. This second composition was also chosen by the orchestra for performance in the Dutch project.

I admire the orchestra's careful and collaborative relationship with the composers involved. For example, recordings of the rehearsals were sent to the composers to listen to at home so that this allowed for a good consultation between composers and conductor about many details of the performances and interpretation in spite of the distance between them.

And after the concert I received an enthusiastic message from the Vice-President of Resonances XXI where she ends:“Thank you again for your confidence about this Dutch project, it's the beginning of a great adventure! Best regards, Delphine GOLDSTEIN”

Saturday's great success was wonderful for me; it just couldn't be better. And at the same time it starts to itch in me again I feel that I want to work again, there is always a longing and searching for music in my heart and in my head. It never ends, it is always there.

Several people have said to me that it was so sad that I was not able to go to Paris for the concert, but I have said if I can’t go to the music then I will have to bring the music to me.