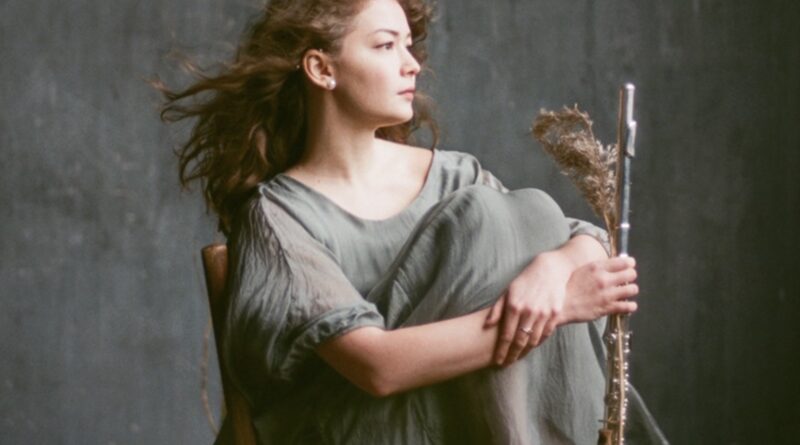 On Being Russian and Studying in Spain

Ekaterina Kornishina was born in Moscow into a family of scientists and athletes, started taking music lessons at the age of four.  And since the age of eleven, Ekaterina has regularly participated in international music festivals in France, Norway, Germany, Israel, Russia, Greece, Austria and Italy.

When I was 5 years old I studied singing and already performed at the Bolshoi Theatre of Russia in such operas as «Turandot» by Giacomo Puccini, «Adriana Lecouvreur» by Francesco Cilea, «La forza del destino» by Giuseppe Verdi, «La Molinara» by Giovanni Paisiello.

When I was 15, I made my debut at the Musikverein Vienna performing Mozart's flute concerto at the Brahms Hall.

At the age of eighteen after graduating from the Central Music School, Vladimir Spivakov offered me the position of solo flutist at the National Philharmonic Orchestra of Russia and bestowed a gift: a flute by the brand Altus.

In 2018, I entered the class of Jacques Zoon in Madrid at the Queen Sofia School of Music.

At the end of spring 2020 I released a CD with my own arrangements for flute and piano of works by Rachmaninov on famous Russian music label “Melody”, and few month after it I got my second degree as a consultative psychologist after defending my diploma on "Influence of mass culture on the unconscious regulation of human behavior".

What made you decide to study in Spain after growing up in Russia?  How was this?  How did you learn the language?

When I was 18, I entered the State Moscow Conservatory of Tchaikovsky and at the same time became a solo flutist of the National Philharmonic Orchestra of Russia. After several years of work, I realized that I wanted more and that it was not the end of my path. After graduating from the Moscow Tchaikovsky Conservatory, I really wanted to study with European professors, because I felt that I lacked the skill to fully express myself as a musician. Since the age of 16, I have traveled to all kinds of master classes and studied with such maestros as Emmanuel Pahud, Felix Renggli, François Laurent, Vicens Prat, Vincent Luca, Shigenori Kudo, Davide Formisano, Kersten McCall, Andrea Lieberknecht, Philippe Bernold, Wenzel Fuchs and Sophie Cherrier. I love them all so much, but different life circumstances prevented me from going to study with some of them in an institutional level. The only person with who I wanted to study and I have never met was Jacques Zoon. Going to his class was the limit of my dreams, but I could not afford to study in Geneva, because it is very expensive and since my 18th I’m not supported financially by my parents. So I didn't even think about it… I found out quite by chance that Jacques also teaches at the Queen Sofia School of Music in Madrid, where at the end I won a study and living scholarships. I was so lucky to get into his class, because before he had no students from Russia. Studying in Madrid at such a school, in a stunning city with always good weather and wine is the best thing that ever happened to me.

I also adore Spanish and very proud to speak it, because it is one of the most spoken languages in the world.

When I’m in a right mindset, when I don't think about technical problems, when I manage to immerse myself completely in music and become a musician but not a pupil, everything turns out as a solved puzzle. It puts me into a kind of meditation, where I can be myself and speak from the heart, where I turn off my intellect and let my body speak with its own language. For me it is the most difficult and the main thing that I love when I perform.

A year ago, I recorded a CD on the famous Russian label "Melody" with Rachmaninov's music for flute and piano. I arranged Vocal Romances and Two Violin Pieces.

My career as a musician began with singing, so I really like to "sing" vocal works on the flute.

The idea of the CD was born in Spain because I miss Russia and its nature very much. As you know, Rachmaninoff also lived in another country and missed Russia, so many of his works are very cinematic and imbued with a sense of Russian nature. That is why there are like pictures from the exhibition - Spring Waters, Lilacs, In My Garden at Night, The Dream, In the Silence of the Secret Night, Hungarian Dance, Vocalise, Italian Polka.

Unfortunately, the presentation of the CD had to be postponed to the summer of 2021 for known reasons, although it can already be heard on all digital platforms. If everything turns out as I planned in the future, the official presentation will be held in three cities - Paris, Moscow and Madrid.

Very few concerts, but the schedule is quite tight, as I teach online and I give consultations about stage fright, tense breathing, artistic crises, memorizing difficulties etc.

To be honest, they are changing all the time. At this moment I am overly concerned about the mental health of professional musicians.  I really want professional orchestras and music education institutions in Russia (and in the world) to have a full-time psychologists who know the industry from within and specializes in the difficulties of our profession!

Mental health is as important as physical health.

I am most inspired by the most ordinary human joys. Like a smell of mandarins and a fire when it’s a cold day…

To give up my position in the orchestra and move to another country. Why did you decide to get a degree in Psychology as well?

It seems to me that I have gone (and still going) through almost all kinds of typical problems of musicians by this time;  from fear of the stage and moving to another country, to the absolute change of my ambush after 15 years of playing the flute, and depression about it.

I was going through all these trials very painfully because there was no specialist with me who would help me to cope with it many times faster. It so happened that some of my close friends are doctors and psychologists. I asked for their advice many times, but they helped me more in my private life than in my professional one (even though it is related to each other). The world of classical music is incredibly special and ordinary specialists do not know all the subtleties and features of how our mind and body develop during our professional training.

Athletes have sports psychologists, don't they? They are present at every appearance of an athlete in public, they prepare them for competitions. And us, the artists? We do everything ourselves and often it is not successful. Some people, of course, do well, but it is always a loss of a lot of nerves and ends sometimes very sadly. It is not just about classical musicians, but artists of any direction.

At some point I was so passionate about this topic that I decided to get the basic knowledge of psychology and to adapt it to my experience. The diploma was a bonus, but it was not my goal.

I believe that the main part of building a good career of musician is to trust yourself and your interests, to build your own path and not be guided by how other musicians build their careers. Simply put, you need to know very well who you are and be yourself.

Many people need help of specialist to understand this nowadays.

There is no need to be afraid of it, it does not mean that we are sick.

It only reduces our precious time with problems and gives the rest to a joy.

How do you plan to combine your two degrees?

I already started integrating it with myself and my flute students. I offered them an extra hour where we would discuss all the important things that we do not have time to talk about in class.

To say that I was amazed by the result was not to say anything. It feels like often there is a certain gap between students and professors that prevents students from being themselves. As soon as you listen to their fears and thoughts, they already want to study more, they start looking for what they need by themselves with my help, but not the opposite way. Now for me and for them every lesson is a total joy, because there is no gap between us and we are partners who trust each other in finding new things. For me there is nothing worse than a blind hierarchy in relation to pupils.

In the end, I want musicians not to hesitate to ask for help about their problems. I really want to help them with my knowledge about the musical business and psychological techniques.

My first professor Yuri Dolzhikov (Denis Buryakov also studied with him in Russia).

When I was 16 years old I had a long conversation with Emmanuel Pahud, which I will remember for a very long time. Therefore, I can also call him my mentor. It was a conversation about music and musical business. He told me to work styles and suggested which professors of Europe I should play for.

That conversation led me to Jacques Zoon, who is, of course, now my real mentor not only in music, but also in life.

To read in Spanish

Love the music you play with all your heart!

Listen to more experienced people, but do not take their opinion as unchangeable right. Remember that you have the right to your opinion.

For your opinion to be valuable:  think and try to find yourself!