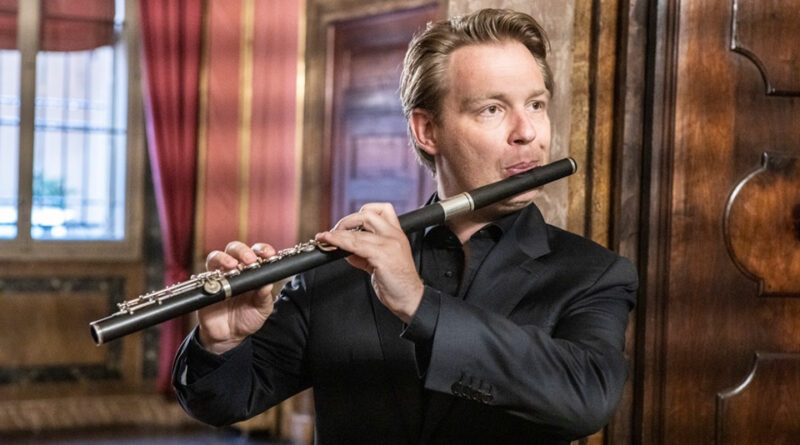 Herman van Kogelenberg, Principal Flute of the Munich Philharmonic, is a dutch flute player based in Amsterdam, the Netherlands. Whilst studying, Herman was appointed Principal Flute with the Orchestre Philharmonique de Liège in 1999.  He resigned from the orchestra to join the Royal Concertgebouw Orchestra Amsterdam from 2003 until 2010. An invitation by the Rotterdam Philharmonic Orchestra and their musical director Yannick Nézet-Séguin to become their principal flute led to Rotterdam in 2010, and in September 2013 he was appointed principal flutist of the Münchner Philharmoniker under Lorin Maazel. With the Münchner Philharmoniker he appeared as a soloist in 2016 and 2018. Since 2017 he is also solo flutist of Orchestra Mozart, founded by Claudio Abbado.

A bit more than 20 years ago (22 actually, ouch...) I was in the Conservatory and like all the students I needed to upgrade my instrument to a professional one.  At the time I was playing a regular silver student flute which basically worked fine. I tried lots and lots of flutes but never really had a ‘click’ with an instrument. Until one day I got to try a handmade Mehnert flute. Mehnert is a small German factory with mainly custom build flutes. Not only wood, but also gold and silver.

Here I did have a real wow moment and I definitely wanted one :)

With my teacher I went to Mehnert to try and order one and when there, basically he told me he wouldn’t do it, because he was running out of the old wood his grandfather,who was a flute manufacturer as well, already stocked. He gave me some silver and gold flutes to try (nice instruments by the way) and funnily enough, after half an hour he came back into the room and told me he would actually do it.

Some months later I got my brand new wooden flute and I was sooooo happy with it!

It took me a little while to get used to it but it felt like it had so much more of a rich sound pallet to discover that I never even thought, "where is my silver flute?"

About half year later or so I did my first audition on this instrument and got my first job, soloflute in the Liège Philharmonic in 1999.  Liège is a the French speaking part of Belgium, and, certainly at that time, the orchestra was also very ‘French’. A greater opportunity to learn all the repertoire was simply not possible.

Some years later I switched to the Amsterdam Concertgebouw Orchestra and I came in touch with Sankyo flutes. Their wooden flutes enchanted me even more, because of the heaviness of the wood. I was playing only wooden flutes and noticed, that many flute builders make very light / thin instruments.  Probably ideal for when you take your wooden flute out a couple of times a year for some beautiful Bach or Mozart or so, but for me personally, not ideal for all year round playing. I needed something ‘more’ and bought my first Sankyo in 2006.

I stayed in the Concertgebouw a bit more than 7 years and was then invited by the Rotterdam Philharmonic and went there, always on wood.

Again 3 years later I won the Munich Philharmonic principal flute position, again on wood, and most probably I’ll stick with it now :)

Of course, sometimes there were people that said ‘ahh wood, are you sure?’ But fortunately until now that was always before  they heard me play on it :))

It’s so enriching to have the opportunity to playing in orchestras from a typically French sounding ensemble, to the very German, Munich Philharmonic. Of course one adapts his sound, and for me the versatility of the wood proves that it is very much possible to do so.

In Liège I had the possibility to learn a lot of repertoire and after that, my Concertgebouw years gave me such an immense access to the world's greatest conductors, soloists and tours (yes, touring was very ubiquitous pre-COVID haha) which was truly amazing. I had the same experience in Rotterdam, and nowadays in Munich. Of course, one can learn so so much from all these great soloists.  Among my favorites? Bernard Haitink, with whom I worked a lot for example, or Dudamel, Kavakos, Trifonov, Jansen... so many.. and such and incredible opportunity to be able to work with all of them!

Parallel to the orchestra I founded together with some friends, a chamber music group, the Farkas Quintet Amsterdam, which actually still exists :)) We gave lots of concerts in Holland and Europe and released a series of CDs with wind repertoire.

Obviously at the moment nobody is awaiting for chamber music concerts, so everything is ‘on hold’.

We can only hope that soon the world will be safe again to give concerts, but clearly I guess that’ll take some time...

So how do my next 6 months look like? I don’t know... I’ll be in Munich recording concerts that can be watched via the orchestra's website;  I will also be in South America for a festival (online of course), teaching in the USA and Asia (well... also online) and throughout Europe (ehm.... online). And then? We’ll see. Let’s hope that when the pandemic is over, the hunger for classical music will only be stronger than ever and that we’ll be able to go out safely again.

What do I like best about performing?  The moment in the concert when the hall is packed, the conductor is amazing, and you have a solo that makes everybody hold his/ her breath, this is every time, such a great experience for everybody, we can only look forward to live those treasured moments again.

Teaching is something I enjoy doing as well.  I used to be professor in The Hague and Rotterdam, but obviously when I went to Munich that became a little difficult to combine.  However I still do actually live in Amsterdam :))

I find it very enriching to meet all these young people wanting to get better and better.  I enjoy finding inspiration in these moments! Except for my live classes, I am also engaged in a lot of online teaching (way before COVID ) and I must say, that gives people from, say, Taiwan or Brazil,  also the opportunity of following regular classes without the need to be there ‘in person’. With a good internet connection, and a good microphone it is definitely worth it!

Speaking for myself, I did not have a very large range of professors. I started with Willem Tonnaer with whom I stayed until the conservatory. I did my bachelor degree with Abbie de Quant, and my master's with Emily Beynon. I don’t know, but for me it worked out very well. All three of them they gave me space to develop my own ideas about sound, phrasing, etc, and really helped me with that. I had such great teachers who didn’t want me to be a copy of someone but instead, offered me space to develop my own musical personality.

After a day filled with all of this music, I like to be at home (again, not too bad in these times), and I enjoy cooking, nice wines, and Japanese whiskeys!