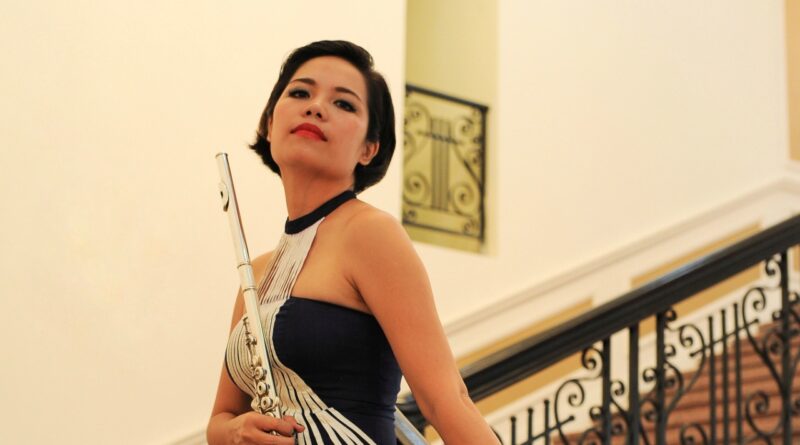 International flutist Huong Thu Le obtained her Bachelor of Music from the Royal Danish Academy of Music in Copenhagen, Master of Music from the Vietnam National Academy of Music, and accomplished her Doctor of Musical Arts degree from the University of North Texas. A former principal flutist of the Hanoi Philharmonic Orchestra and flute faculty member of the Winds Department in the Vietnam National Academy of Music, Dr. Huong Thu Le aims for a variety of performances and colorful expressions from classical to contemporary music. She emphasizes and promotes the integration of cultural elements in each musical work. 1st Prize winner of American Protégé Woodwinds and Brass Competition, Huong Le had her debut in Carnegie Hall, New York in 2019, and she has performed intensively as a soloist, chamber musician, and orchestral member in hundreds of concerts in Vietnam, Japan, France, Germany, the United States, England, Denmark, and Sweden.

Some years ago, I played a French romantic sonata in my DMA recital at my professors’ suggestion. After the performance, several audience members mentioned that they had never heard the piece before, and they thought it conveyed a distinctive language, as well as being a challenging work of music. They expressed listening to it was like observing a painting, which combined Picasso’s figures and Monet’s use of color, or it felt like you start driving a Chevrolet from Texas and end up your journey in New York with a Tesla. For the love of studying and playing the work myself, as an admirer of French music for many years, it is an utmost aim that I introduce the piece to a greater audience, since the work is neglected as standard flute repertoire and little has been written about it.

All of the aspects mentioned above are the premise of why I come to my dissertation topic, which is Gabriel Pierné’s Sonata in D Minor, op. 36: a study of the work’s compositional language and context, focusing on the composer’s transcription for flute.” The purpose of this research is to introduce and spread awareness to other flutists and flute professors of the existence of Pierné’s Sonata in D Minor, Op. 36, and to enhance its place in the flute repertoire. This is a summary of what my research is about: “There are very few significant sonatas for flute and piano written between 1880 and 1918, a period of unusually rich stylistic diversity. Gabriel Pierné composed his Sonata in D Minor, Op. 36 for piano and violin in 1900, and later transcribed it for flute and piano. Unfortunately the work has not been embraced to a significant extent by either violinists or flutists.

The wealth of violin sonatas from this period might explain it not becoming part of the canon for violinists, but this is not the case for the flute repertoire, where it seems that it should hold a place of genuine importance. Since little has been written about Pierné as a composer or about this piece in either of its versions, this project is intended to promote an understanding of the work in its historical and theoretical context and to advocate for more frequent performances. This document will also suggest an alternate version of several particular passages so it can better represent the characteristics of today’s flute and its modern techniques. This research will help other flutists and flute professors to introduce and spread an awareness of its existence and ideally helping to establish its place in the flute repertoire. From a historical standpoint, this dissertation will also offer a case study of "Gabriel Pierné’s place, both stylistically and institutionally, in the history of French music in fin-de-siècle. Both of these goals fill important gaps in the existing research literature.”

I highly recommend the compiled music score Œuvres françaises pour flûte et piano du XIXe et XXe siècle (French music for flute and piano of the 19th and 20th centuries), which is selected by French flutist Bruno Jouard. It not only includes the most recent edition (2016) of Pierné’s Sonata that contains no change from the earliest editions but also a compilation of several virtuosic sonatas for flute and piano by French composers of the nineteenth and twentieth centuries. Jouard noted in his introduction of the edition that “this anthology attempts to meet this need by collecting the finest pieces of French music for flute and piano from the Durand-Salabert-Eschig catalogue: to reveal, recommend, complete (thanks to the presence of some pieces which are perhaps less well known) or recollect the knowledge and skill of flautists.” I hope this article can help if you are looking for a piece with beautiful French aesthetics from the romantic period to put in your program cycle. I am sure you will find it very interesting and challenging during the practicing and performing process. Enjoy the work!

If you would like to know more about the composition, don't hesitate to contact me via the following channels. Thank you!