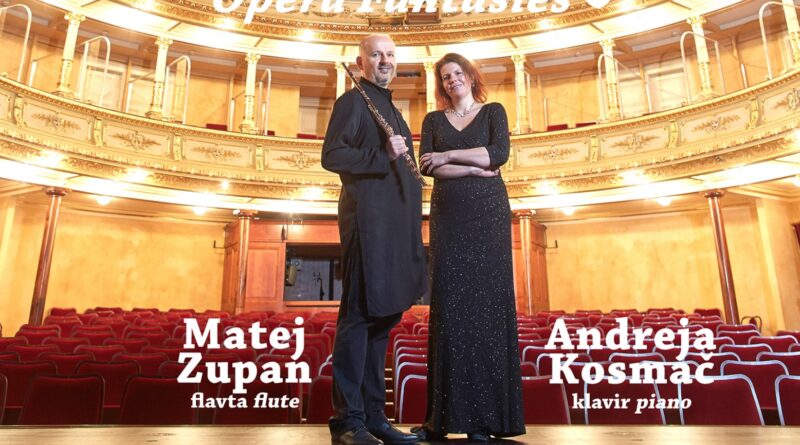 Matej Zupan is a flute Professor at the Academy of Music at University of Ljubljana. From 1996 to 2008 he was the principal flutist of the Slovenian National Radio Symphony Orchestra. As a soloist and member of various chamber ensembles he performed in Europe, North and South America and Asia. He recorded for Slovene Radio and TV, RAI and ÖRF. So far he recorded six solo CDs and six CDs with two ensembles: Woodwind Quintet Ariart and Contemporary Music Ensemble MD7. He led seminars for Flute in Slovenia, Croatia, England, Austria, Italy, Serbia, Greece, Luxembourg, Brazil and the USA. He was a member of jury at different national and international competitions in Slovenia, Italy, Hungary, Romania, Serbia and the USA.

At a time when opera was the most sought-after musical event, its glamor was not available to a large part of the music-going public. With the rise of instrumental virtuosity, however, new ways of disseminating opera melodies emerged. Many 19th century virtuosos wrote such compositions – which were also known as fantasies or potpourries – in which they combined the attractive melodies of popular operas with first-rate virtuosity. The featured repertoire brings romantic salon music performed by flutist Matej Zupan and pianist Andreja Kosmač.

Matej Zupan’s latest CD release is a remarkable recording of Opera Fantasies with pianist, Andreja Kosmac. The album includes favorite virtuosic pieces from the flute repertoire. The CD opens with the Fantasy Rinaldo by W. Popp. Zupan's superb musicality shines through with his shimmeringly  gentle and elegant sound. Kosmac expertly accompanies on the piano making this track a musical feast for the ears. What a treat!

As the works selected for the album are highlights from the great flute virtuoso pieces, the album will surely provide plenty of long-standing listening that is both inspiring and motivating. The Zupan Kosmac Duo offer a magnificent album of delightfully captivating works for flute and piano pooled from the world's finest operas. Each work is brilliantly performed showcasing the Zupan Kosmac Duo in a most impressive light.

The album is available on all platforms Apple Music, YouTube, Spotify, Deezer, and more.