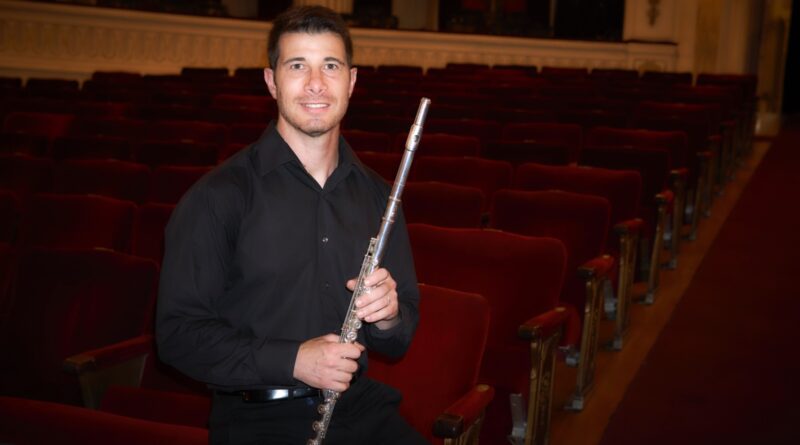 Spanish flutist, Carlos Enguix currently lives in Chile. He is the solo flutist of the Orquesta Filarmónica de Santiago. He combines his activities as soloist with the orchestra with his duties as flute professor at the Conservatorio de la Universidad Mayor.

The are always important moments that mark a career or a path where one wants to go. Some of them for me have been the following:

Winning the competition in Xátiva. It was my first competition and I studied really hard for it. I did not enter to win, but to pass to the finals to be able to perform the works I had prepared. I felt very comfortable on the stage and that was the moment I decided to dedicate my life to music.

Joven Orquesta Nacional de España (JONDE) National Youth Orchestra of Spain: In 2000, I went to the auditions in Madrid to try out for this orchestra. I was feeling confident and I have fond memories of that audition. I did not expect to see my name on the list of selected musicians. I was going to have the opportunity to play and study with a great orchestra, get to know great professors and to tour all over Europe playing fantastic pieces with fellow students who played at an incredible level.

Studies in Rome: I had not finished my studies, but my teacher, Carolina Lluch, to whom I owe so much, recommended that I study outside Spain. I was able to start studying with the great teacher, Raymond Guiot, and it was with him that I studied two years, and where I obtained a unanimous first place in my final exam.

Studies in Cologne, Germany: I wasn’t sure how to continue with my graduate studies, I felt uneasy as to how to continue. Luckily, in one of the rehearsals with JONDE I met the incredible professor, Robert Winn who I held with great esteem. It was after this that I auditioned to study at the Hochschule für Musik und Tanz Köln where I studied for six years and obtained my Master’s in Music.

Move to Chile:  I was invited to come to Chile to word with la Orquesta Filarmónica as solo piccolo. I accepted immediately without even thinking about it as at that moment, I found myself working in as a freelance musician in Spain, but there was nothing stable about this. Nine years have passed since this moment. How time flies!!

First of all, having won a place in JONDE was crucial for me to have gotten to know professors and to play great works within an symphonic orchestra. Another point was to have been able to listen to my great teacher Carolina Lluch. Up until now, every time I return to Spain, I play for her as she always has good advice and suggestions. Lastly, having met and been able to study with Robert Winn marked me profoundly.  At first it was hard, but in time I started understanding his methods and as a result, I always have him very present with every note I play as well as when I teach my students.

I’m in love with seeing my students progress, obviously each one in his or her own time, but it is very satisfying to see the technical and musical maturation progress week to week. It is more than teaching and how the student evolves as teaching individual classes creates a special relationship as teacher and student create a special bond. I love seeing how students who I taught 5 and 6 years ago are playing at such a great level.

I love seeing how the audience enjoys the music because it certainly is a two-way street. In those moments that the audience follows the music and doesn’t breathe until the musician does is unforgettable.  I also love the camaraderie that is formed with the musical colleagues within an orchestra, that which just a look or a small gesture, we know what is being communicated.

Now with the orchestra we are working online with masterclasses and talks since the pandemic does not allow us to make music in person. The classes are also being held in this format. We are hoping that it passes quickly and that we can return to performing since a musician lives off the stage. In the short term I am going to record the Mozart concert for flute and harp with the Santiago Philharmonic Orchestra (my orchestra), and I am also scheduled to record the concerto for flute and orchestra in E minor by S. Mercadante with the Camerata orchestra of the Andrés Bello University also from Santiago. I hope that the virus and the quarantines allow it because I have an incredible desire to perform these.

How did you end up in Chile?

I came to Chile on recommendation. I met my teacher Robert Winn on a trip he made to Spain and he told me, while we ate ham and drank good wine, that they were looking for a piccolo in Chile and that he wrote to my piccolo teacher in Köln who was Thaddeus Watson since he had more information. He put me in contact with the head of administration of the Santiago Philharmonic and they offered me a one-year contract with the possibility of remaining with an indefinite contract if I passed that year of trial. At that time I was in Rome with a Spanish orchestra led by the Chilean maestro Maximiano Valdés, who had been the head of the Philharmonic orchestra for many years. I took the opportunity to ask him and ask for his advice and he encouraged me a lot to change of scene and dare to cross the ocean. I passed the test year and became part of the orchestra staff in which I am still very happy, although now as a soloist flute since in 2016 the position was vacant and I won the audition. The worst thing about this is that I had to pass two years of testing, one as a piccolo and another as a solo flute.

Personal goals do not go beyond living quietly and in harmony, without discussions or conflicts with anyone. I think a lot of energy is lost when you get on badly with people. I prefer to use this energy in being happy, doing sports and doing my best on stage and in classes.

Professionally, I was ambitious when I was younger and my dream was to play in an orchestra as a solo flute, which I have now achieved, but I still love to continue learning. I graduated years ago, but when I have the opportunity to attend a class, I do it to learn from everyone. Now with the arrival of the virtual modality (although it is not the most suitable for sound quality) you can be anywhere in the world and have a class with great teachers at the click of a button.

What inspires you most in life?

Recordings of orchestras performing great symphonies inspire me a lot.  They make my skin crawl and make me very motivated to study. A funny thing happens to me when I don't feel my sound very solid or high. As soon as I listen to some James Galway recording and I quickly feel an injection that makes my sound change and improve instantly. Something that motivates me a lot is trying to imagine the moment of performing on stage and putting myself in the concert situation.

I think my biggest challenge was going to Germany to study. Although it is true that it is very close to Spain, it was a very different language and it was very difficult to have all the conservatory subjects in German, which I also did not speak when I got there. I knew it was going to be tough and it really was in the beginning. Once there, the big challenge was to get a good articulation playing the flute hahahahahaha !!

I attended courses and masterclasses with great teachers, but the ones that affected me the most were the three I mentioned above.

Carolina Lluch from a very young age with whom I learned basic aspects of the flute. She has always been very good to me, although demanding as well and the best of all is that she has always believed in my possibilities.

Then it was Raymond Guiot who was a beast for technique, with flexibility exercises and millions of scales and arpeggios that do us flute players so well. Monsieur Guiot was very rigorous and I learned to distribute my study routine and to solve difficulties in technical passages with many study formulas.

And finally Robert Winn from whom I learned that the flute could be played with the volume of a trombone and its sound controlled. I don't think I've ever heard such a perfect and controlled articulation. He taught me to have an attitude on stage and to know how to fight and fight for goals. He was very demanding but I also think he was the best thing I did in my life. I keep all of them in mind every time I have the flute in my hands.

Can you give us quirky, secret, fun, (don’t think too much about this) hobbies or passions?

I was always a very sporty person and before arriving in Santiago I was running a Half Marathon (21k) but it is difficult to run in such a big city with so much pollution so I signed up for the gym and now I do bodybuilding. With the arrival of the pandemic, the gyms have closed so I have bought equipment to be able to train at home and I enjoy it a lot. I won't be a Mr. Olympia, but I stay in shape.

One passion is that I am addicted to eating Donuts hahahahaha although I always try to eat healthy.

I really enjoy the screen, watching series and movies.

When I have time I like to cook dishes that my mother makes when I am at her house or those so rich that my grandmother made.

Something I do very frequently is go for a long walk listening to a podcast where people from all walks of life are interviewed. You always learn exciting and curious things.

The first thing I would say to you is that if you really want to be a professional and make a living from the flute or music, think long and hard about it because it is not an easy path. Yes, it is exciting, but very complex. I am not going to tell a person that they are not good for the music path, so if I see someone really passionate about music, I encourage them blindly.

Another tip is to choose very closely with whom you want to study. Not all teachers are good for all students and when it comes to shaping the future it is very important to choose well.

And the last tip is that you not stop studying technique since this will greatly facilitate the way to be able to play musically. Obviously play with passion and heart, but don't forget to play all the notes in the correct order.