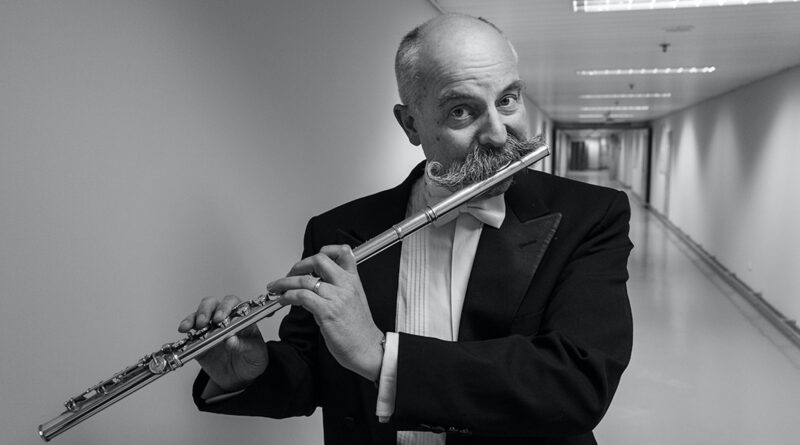 Michael Cox is one of Britain’s foremost flute-players. Born in England he spent his childhood in Africa, studying at the Zimbabwe College of Music and then the Royal College of Music in London. He is Principal Flute of the Academy of St Martin in the Fields, BBC Symphony Orchestra, London Sinfonietta and London Mozart Players. Michael is an Altus international Artist and plays on their instruments.

Academy of St Martin in the Fields are giving a concert on 3 June, in person at its namesake church St Martin-in-the-Fields in Trafalgar Square. It goes up online a few days later, on 8 June. The programme includes the London premiere of Sally Beamish's Ariel which was originally written for solo viola but she wrote a version especially for Academy Principal Flute, Michael Cox.

What was it like having Sally Beamish re-work one of her pieces especially for you?

Basically exciting! I'm a great fan of her music & she's obviously something of an 'it' composer at the moment. Although it's absolutely 99.99% her work, it was also lovely to mull over the piece together with her (particularly as she's so delightful) and find that some small ideas I had, including the nature of the ending, made it into the final version. A lovely outcome too was that Sally thinks it works better as a flute piece than it did in the original version for viola. Given that Sally is a viola player and is completely devoted to all things viola that's saying a lot!

How did you first come into contact with Beamish’s music?

To be honest I've known Sally and her music for years (we're much the same age) and I can't really remember what I heard first! All four of the performing groups I belong to, the Academy of St Martin in the Fields, BBC Symphony Orchestra, London Mozart Players and London Sinfonietta all perform her music so I've had a lot of wonderful exposure to it over the years.

Have you been performing throughout the Pandemic?

Yes, obviously pared down in quantity but with a good mix of different things. There were rather too many unaccompanied online recitals for comfort where I really missed the harmony, texture and fun of working with a collaborative colleague. Streamed chamber works & multi-tracking also became a mainstay and were cool in their own way but probably I missed the sparky liveness of chamber music more than anything else. Orchestral concerts were sporadic but heart-warming.

It was great to stop the professional clock for a while and have welcome time and space to live, breathe and think. I did a lot of walking and cooking.

Will this concert have an audience?

Yes! The concert will be performed live to an in-person audience but it’s also being filmed and streamed online for 30 days from the following Tuesday. The church has a reduced capacity and the audience is socially-distanced, amongst many other safety measures that are in place.

Any creative new expressions for you since the lockdowns?

I've had such fun learning the bansuri and having masses of time to practise the piano. I'm happy (and just a little proud!) to say that my lockdown target of learning 100 new piano studies has finally been achieved! However, the creative endeavour that's given me the greatest thrill during this time has been learning the viola. I'm just loving playing a string instrument too - however badly! The rhythm of practising for the goal of a regular weekly lesson with my wonderful teacher and colleague Peter has been a really helpful focus.