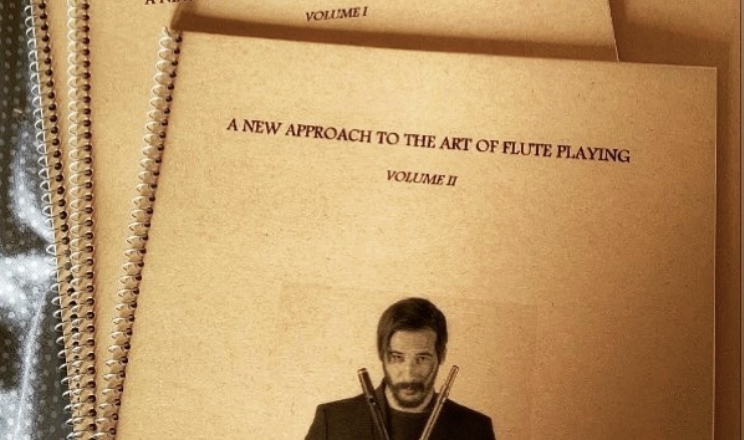 "A New Approach to the Art of Flute Playing" Book Series idea emerged in 2010, due to my need to find exercises for my daily study. This project stems from the search for new paths, for a different artistic identity over the past few years. This work was created along with my mentors and other professional colleagues - Jacques Zoon, Salvador Martinez Tos, Wolfgang Schulz, and Máté Bán - to whom I would like to express my gratitude. The exercises came from my classes notebook, where I took ideas, information, and inspiration from all the flute classes and masterclasses I took around the world from 2010 to 2021. These books were edited by Bruno Macedo, who supported this project from the beginning with his editing knowledge. We rejected some official musical editors, to whom I deeply apologize. The reason is we want that all profits of the books to go to the Portuguese Institute of Oncology. We kept the exercises handwritten to show how they were taken and used for my practicing from the notebook in different years.

The first book was released in 2018. It focuses on the flute tone, with little exercises based on contemporary techniques to help the flutist on his/her embouchure, etc. The second one, in 2020, focuses on finger technique, control, and speed. The third one on articulation and the fourth on intonation, both released in 2021.

The exercises outlined in these books are not meant to be taken as a unique guide during practice but rather a complement alongside the work suggested by M. Moyse, P. Taffanel, Ph. Gaubert, among others. It is strictly important to follow, with extreme discipline, all the indications are given at each stage of the exercises.

The order given is not logical, nor is it a work done in numerical order, so that the exercises can be performed in random order, according to the need of the interpreter. These methods were written for an advanced degree of study and/or professional level, and should not be addressed in the first years of the study of the flute. The indications of time/duration of each exercise vary according to the intended result, however, the duration suggested by the author should be minimally respected, since some exercises can be quite demanding, therefore creating fatigue and consequently loss of focus and efficiency.

Before the approach to each exercise, it is fundamental to have a warm-up, not only of the flute but also of arms and hands, in order to avoid muscular injuries.

These books are dedicated to my mother, my father, my wife, and my former Professor Jacques Zoon for the support they always gave me.