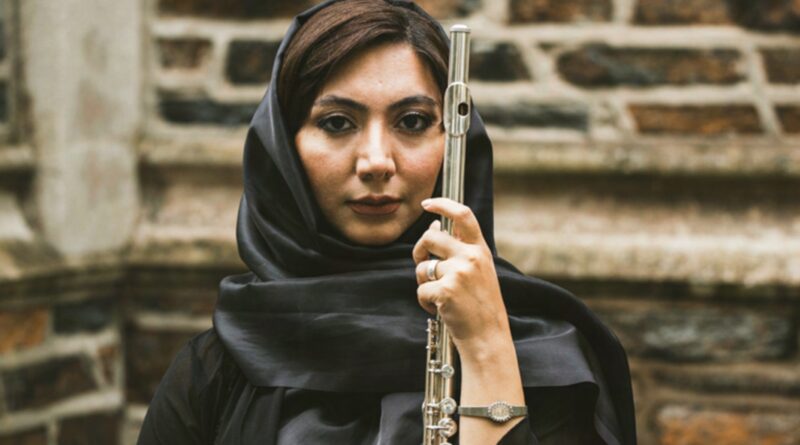 Kelariz Keshavarz is an internationally awarded flutist, active in classical and contemporary fields. She is an avid sound artist, improviser, and pedagogue. Passionate about contemporary music, she has performed in many festivals worldwide and performed multiple world premieres.

Iranian New Waves is a unique project whose goal is to present over fifty new compositions for solo flute created by established contemporary Iranian composers. The history of music-making throughout Persia over millennia has contributed to the rich repertoire of contemporary Iranian music. The composers featured in this project have drawn from this distinguished heritage to expand upon the flute repertoire, each with their own unique approach. While these composers are currently living in various nations around the world, all of them are of Iranian descent and continue to have a significant influence on the development of contemporary music in Iran. This anthology of music encompasses a vast array of inspirational influences extending from village shepherd music to the hustle and bustle of today’s metropolitan cities, from the words of Persian poets and philosophers to Western cultural influences. The compositions on this album have either been newly commissioned or are pre-existing works that have not previously been released.

1. Why did you record this CD?

The critical concern I was dealing with, which led to launching Iranian New Waves project was: “to what extent does contemporary Iranian flute music reflect Iranian national identity, despite its frequent reliance on Western compositional influences?” Through my observations and analysis of the pieces in the Iranian New Waves anthology, I had to live in the versatile worlds evoked by each of the compositions. This project was a self-discovery journey of my multicultural identity aside from my nationality.

2. Where did you get your Inspiration?

I believe that contemporary art is a reaction to what is happening in the world, and the artist reflects those occurrences in their art. The world I’m referring to is not only the visible world around us. It also means the world within each artist, how one thinks, feels, and communicates. When it comes to contemporary music, the same approach resonates as well.

3. Facts about the project?

Pieces in this album can be categorized into three groups. Some of the works are influenced by Iranian music, while others incorporate elements of Iranian culture in more subtle ways. Some of the pieces are inspired by the cultures of other countries and are drawn from literature, philosophy, architecture, and other sources. These compositions, regarded as a whole, speak to me about cultures and nationality, a multicultural puzzle that is unbound by geography or politics.