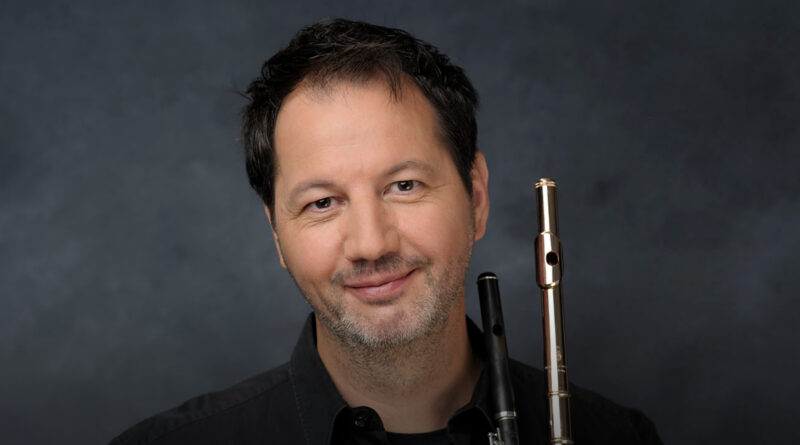 Flutist Jürgen Franz was a member of the Bielefeld Philharmonic Orchestra and played Principal Flute in the Stuttgart Philharmonic Orchestra. Since August 2000, he has been a member of the radio orchestra NDR in Hamburg. He is Professor at the Musikhochschule Hamburg and at the Hamburger Konservatorium, and has given masterclasses in Germany, China, Spain, USA, and Japan. Mr. Franz has been a Haynes Artist since 2013 and performs on a 19.5K gold flute.

Flutist extraordinaire Juergen Franz has released a new album featuring ballads and romances for flute and piano, some arranged by the flutist himself. It’s a lovely, beautiful and unique collection of music, unexpected in a typical flute album and beautifully played and recorded by Franz and his excellent pianist, Ulrike Payer. It is nice having the Ballad as a musical storytelling and a Romance as expressing unstructured feeling, and there is a sense of this in Juergen’s beautiful playing, in his control, expressivity and intensity of feeling in all the pieces. Some of the works will be familiar to most flutists including Reinecke’s Ballade opus 288 (at 9 minutes the longest piece on the album) the Saint Saen Romance, and the three works by Gaubert, the two Romances and Ballade. These are not so often played beautiful pieces by Wagner, Debussy, and Mompou, which were all arranged by Franz and are good additions to the flute repertoire. Flute works by Reger, Perlihou, and Honegger round out the album. Franz and Ulrike are a terrific team, unified rhythmically and musically and, both expressing the character and mood of each work, helping us to imagine the story and feelings clearly and intensely.    --Barbara Siesel

Why did you record the album?

I had the idea to record an album like this, some years ago. Our goal was to show the flute as an instrument which is able to tell beautiful and interesting stories. For this reason we found that the ideal formal structure is contained in Ballades and Romances for flute and piano.

Where did inspiration to record the CD come from?

I really love to listen to piano music, especially the older generation of Piano-Artists. When I listen to Artists of this level, I never have the feeling that the music is in a hurry, or that they just play the music fast to show their virtuosity. For me it´s a more“poetic“ way of interpreting. That is how I got the inspiration for the title the poetic flute for the album.

I’m really lucky to have Ulrike Payer as a partner at the piano for this recording. We know each other from our orchestral and chamber music work here in Hamburg.  Somehow, we have similar ideas about style, phrasing and beauty which is very helpful for an album like this. Like every CD I’ve recorded, some of the pieces are transcribed by myself to expand the flute repertoire. The Debussy Ballade for example, is now also available in a printed version at: www.vigormusic.it.

Check out these links to listen: